Herzog: There must be immediate disengagement between Jews, Palestinians

"Of course this is an intifada," says MK Bar-Lev, on Zionist Union visit to east Jerusalem. 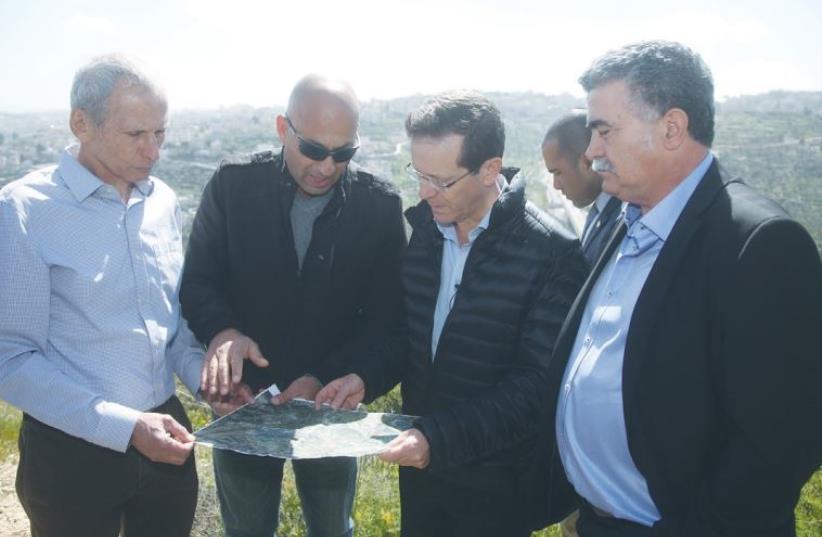 ZIONIST UNION head Isaac Herzog (second from right) and faction MKs Omer Bar-Lev (far left) and Amir Peretz (far right) stand on a Jerusalem hilltop yesterday for a briefing from Col. (res.) Shaul Arieli.
(photo credit: MARC ISRAEL SELLEM/THE JERUSALEM POST)
Advertisement
On a hilltop in Jerusalem’s Shuafat refugee camp, with sweeping vistas of the western portion of the capital, opposition leader and Zionist Union head Isaac Herzog got right to the point on a windy Monday afternoon.“There needs to be a disengagement between us and the Palestinians,” Herzog said, “not by withdrawing from the territories, but by separating us physically, with security fences that should have been completed long ago, and with steps on the ground that would ease the tension dramatically.”As the capital’s security situation continues to deteriorate, Herzog, who unsuccessfully challenged Netanyahu for the premiership a year ago, emphasized in an exclusive interview with The Jerusalem Post that measures must be taken immediately to put an end to the ongoing violence.“This is one of the worst periods between Jews and Arabs in the land,” he told the Post on a tour of east Jerusalem locations with members of his faction.“What we need to do is take major security steps to fight terror on the one hand, and on the other hand take steps in the region – for example, a regional security conference and empowerment of the Palestinians beyond the fence.”The MKs were briefed by Col. (res.) Shaul Arieli, a commentator and member of the Peace and Security Association, a group of former army, police and intelligence community officials promoting a political solution to the Israeli- Palestinian dispute.Asked what could be done right now, Herzog said that all violent Palestinian neighborhoods should be fenced off from Jewish neighborhoods.“Complete the fence around settlement blocks and put up the fences between the Palestinian villages around Jerusalem, which are not really a part of the city that we prayed for, and the city itself,” he said.Such Palestinian communities, he clarified, included “major villages that have no attachment at all to Israel, but on the other hand, where youngsters are coming in and trying to stab Jews day in and day out.”Zionist Union MK Omer Bar-Lev, who has served on the Knesset’s Foreign Affairs and Defense Committee and is working closely with Herzog on a viable separation plan, told the Post there was no question that Israel was in the midst of a third intifada.“Of course this is an intifada,” said Bar-Lev, a former commander of Sayeret Matkal, the General Staff Reconnaissance Unit, the IDF’s most elite special-forces unit.“It’s different from the second one, and the second one was different from the first one, but it’s been going on for almost six months and it doesn’t seem that it is vanishing,” he said. “And this is a fact – I don’t see that it will disappear.You know, maybe there will be changes, like more shootings than stabbings, but the only change from this moment is for the worst.”Moreover, Bar-Lev said that Prime Minister Benjamin Netanyahu and his coalition had yet to present a viable counter-proposal for separating Palestinians from Jews.“They are not presenting a solution,” he said. “In fact, the IDF, the Shin Bet (Israel Security Agency) and the police are doing their utmost, but they are saying that they really don’t have an answer to a high-school boy or girl who wakes up in the morning and decides to stab someone.”Compounding the security dilemma, Bar-Lev asserted, was the random and unstructured actions of the young terrorists.“You know, it’s not an organization that you can try to get into their network and know what’s going on,” he told the Post. “Most of it is individuals that just make a personal decision in doing what they’re doing. The answer is separation, not the status quo.”Despite repeated requests, no one from the Likud was available to comment on Herzog’s plan, which the party has deemed unacceptable.However, during the party’s Knesset faction meeting Monday afternoon at Jerusalem’s Menachem Begin Heritage Center, Netanyahu asserted that peace with the Palestinians would come if Israel improved relations with the greater Arab world.“If someone thought earlier that a breakthrough with the Palestinians would lead to improved relations with the Arab world for us, the opposite is happening, and will continue to happen,” he said. “The Arab world softening its views toward us will help us when the time comes to reach a real and lasting agreement with our Palestinian neighbors.”