The court issued the temporary injunction after accepting a petition lodged by Zionist Union MK Eitan Cabel and others who were protesting the eighth amendment to the Public Broadcasting Law. 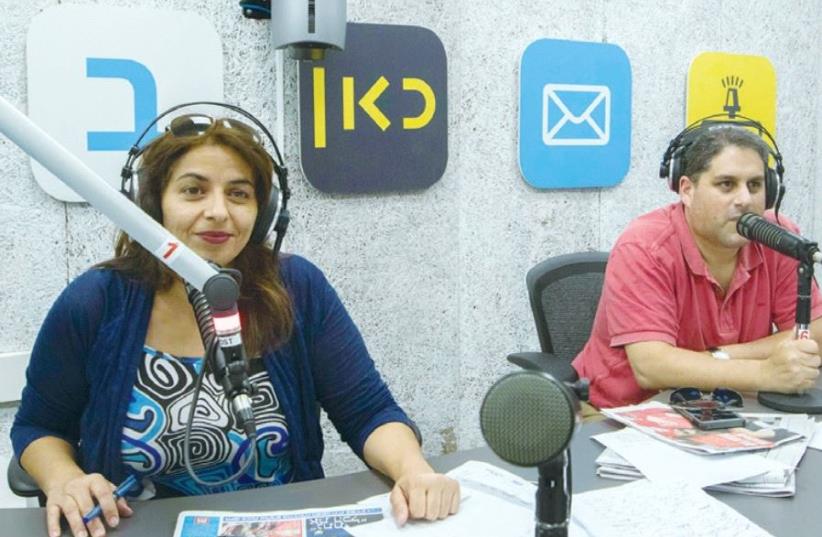 IBC STAFF are shown yesterday at their temporary studio in Modi’in preparing for today’s scheduled launch
(photo credit: YOSSI ALONI)
Advertisement
The High Court of Justice issued an injunction Sunday night freezing the splitting of the new Israel Broadcasting Corporation, or Kan, until the petitions against the split have been heard in court. The hearing is due to take place Monday morning.The court issued the temporary injunction after accepting a petition lodged by Zionist Union MK Eitan Cabel and others who were protesting the eighth amendment to the Public Broadcasting Law – voted on and passed by the Knesset last week – which calls for a separate news corporation to be established and be run by the people who ran the news at the Israel Broadcasting Authority, with the addition of other news personnel who have been contracted by Kan.The Movement for Governability and Democracy issued a statement saying that the court has fallen into a political trap, and is dealing with issues that are not its concern.Amid the resultant chaos that has undermined public broadcasting for the past three years is the question of what happens if the court fails to reach a decision on Monday afternoon: Will it extend the injunction, or will it leave the Knesset vote as is? Meanwhile, the new Israel Broadcasting Corporation called Kan, which means “here” in Hebrew, is scheduled to begin broadcasting on three platforms – radio, television and digital.At 11 p.m. Sunday, Kobi Barka’i broadcast the final news bulletin under the aegis of Israel Radio – Kol Israel – from the Romema studios in Jerusalem.Kan radio stations are scheduled to begin broadcasting on the same frequencies as their Israel Radio predecessors at 6 a.m. on Monday, with television broadcasts slated to go to air at 5 p.m.Regular Reshet Bet listeners – who for the past few days could only hear their favorite broadcasters during hourly news bulletins – will be comforted to know that at 6 a.m., they can again hear Arye Golan. Now, however, he will not sign on or off with “Israel Radio being dismantled,” as he has for several years, because Israel Radio and the Israel Broadcasting Authority no longer exist. But Reshet Bet does, and reportedly will continue – with minor changes – in more or less the same format as before and with many of the same people at the microphone.Changes will be more obvious on television, other than on the nightly hour-long news broadcast at 8 p.m. What will remain intact is Seeing the World, Ya’acov Ahimeir’s weekly Saturday night news round-up. Ahimeir is particularly happy that his interview with the Archbishop of Canterbury will not go to waste.Television channels are now Kan 11 and Kan 33. Channel 33 is devoted to Arabic broadcasts.Among the regular programs beginning Monday at 10:30 p.m. will be Culture Club, a nightly mix of interviews and mini-documentaries hosted by Shifra Kornfeld and Esther Rada, with rotating guest interviewers Daphna Lustig and Lucy Yiov, who will also be a field reporter.The opening program will have an interview with and performance by Kobi Oz and Teapacks.An interview conducted by Kornfeld with Ninet Tayeb during a recent visit home will also be broadcast. Tayeb and her husband now live in Los Angeles with their infant daughter. Yiov will present an opinion piece.Other programs scheduled during the week include a moving documentary by Racheli and Gal Schwartz, The Wounded Syrian, which tells the story of the wounded from both sides of the Syrian civil war who were brought to Israel for medical treatment. It also shows the mother of a young boy whose life and face were saved by an Israeli surgeon. Ordinarily, faces of Syrians are blurred to protect their identities, but this mother had no fear in showing her face because she wanted the world to know that Israelis are humane and not like what she was taught.The film will be screened on Tuesday at 9 p.m.Friday night-owls will get three different NBC series running consecutively from 10:15 at night: Chicago Justice, from the producers of Law and Order; The Good Place, a comedy about a woman who dies and goes to heaven but can’t understand how she got there; and Great News, another comedy about a young television producer whose bossy mother gets a job as an intern at the same channel.Broadcasts will initially start on the outskirts of Modi’in.Golan told The Jerusalem Post the Jerusalem premises are still being completed and should be ready within two or three months.Interior Minister Arye Deri objected to the location of the Kan studios at 35 Kanfei Nesharim Street in the capital’s Givat Shaul neighborhood, as it leads to the religious neighborhood of Har Nof, where Deri lives.Because Kan will function 24/7, Deri asked Kan to relocate to a less sensitive part of the capital to avoid Shabbat violations in the area.Kan representatives declined to comment on this issue.