Viktor Orban's comments come against the backdrop of an anti-immigrant billboard campaign sponsored by the Hungarian government that features the image of Hungarian-Jewish financier George Soros. 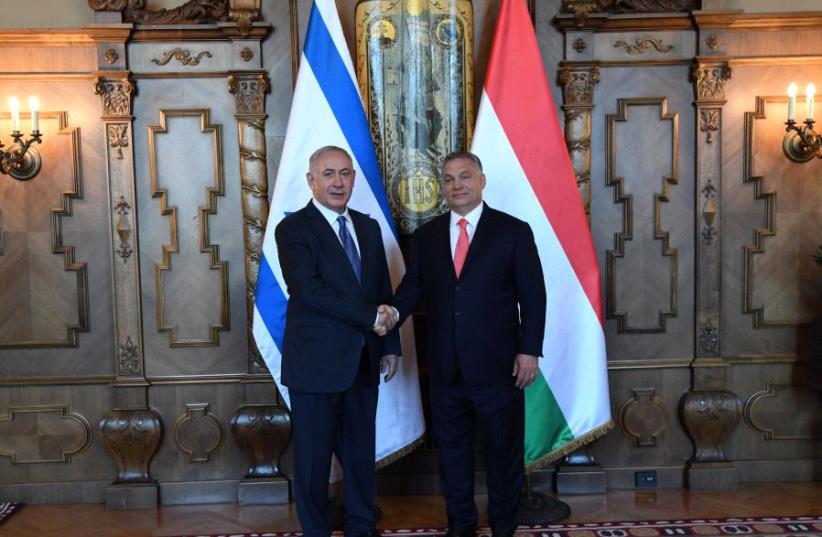 Netanyahu and Orban
(photo credit: CHAIM ZACH / GPO)
Advertisement
Hungary erred and sinned when it cooperated with the Nazis and did not protect its Jews during World War II, Hungarian Prime Minister Viktor Orban said in a public statement alongside Prime Minister Benjamin Netanyahu following their meeting on Tuesday in Budapest.Orban said he made clear to Netanyahu that his government will guarantee the security of the country’s Jewish minority and that it has “zero tolerance for antisemitism.”His comments, made after meeting with Netanyahu, came against the backdrop of an anti-immigrant billboard campaign sponsored by the Hungarian government that features the image of Hungarian- Jewish financier George Soros, and many in the Jewish community believe has antisemitic overtones.Last month Orban was also sharply criticized for praising as an “exceptional statesman” Miklos Horthy, the Hungarian leader during World War II when 600,000 of the country’s 800,000 Jews were murdered by the Nazis – with the help of eager Hungarian accomplices – during 10 nightmarish months from March 1944 to January 1945.
Hungarian government poster portraying financier George Soros and saying "Don't let George Soros have the last laugh" is seen at an underground stop in Budapest, Hungary July 11, 2017. (REUTERS/LASZLO BALOGH)
“I told the prime minister that we are aware of the fact that we have quite a difficult chapter of history behind us.And I wanted to make it very clear to him that the government of Hungary, in a previous period, committed a mistake, even committed a sin when it did not protect the Jewish citizens of Hungary,” Orban said.Every Hungarian government, he said, has the “obligation to protect and defend all of its citizens, regardless of their birth and origins.During World War II this was something – a requirement – that Hungary did not live up to, both morally or in other ways. And this is a sin because we decided back then, instead of protecting the Jewish community, to collaborate with the Nazis.”While this was not the first time Hungary has acknowledged its role in the murder of its country’s Jews, Orban has previously led a campaign of historical revisionism, seemingly aimed at rehabilitating Horthy and minimizing and whitewashing Hungarian responsibility for the destruction of the Jewish community.Netanyahu, in his comments, characterized Orban’s comments as “important words.”“I discussed with Prime Minister Orban the concerns that I heard raised from the Jewish community,” Netanyahu said. “He reassured me in unequivocal terms, just as he did now, publicly. I appreciate that.”Not everyone, however, was equally impressed. Yesh Atid head Yair Lapid issued a statement saying that while Orban’s words were welcome, “We must be clear – Hungary had a significant role in the Nazi extermination machine and was actively involved in the murder of Jews. In the murder of my family. That only heightens the severity of praising Miklos Horthy.”Lapid said that Israel must not be silent when a European prime minister calls an antisemite an exceptional statesman. “That it is our moral responsibility to the millions who were murdered in the Holocaust,” he added.Netanyahu – who arrived in Budapest on Monday and will take part in a summit with Orban and the leaders of Poland, the Czech Republic, and Slovakia on Wednesday – is the first sitting Israeli prime minister to visit Hungary since the fall of Communism in 1989.Orban acknowledged this and said the purpose of the visit was “to consolidate and to fortify the relationship of the two countries for a long time to come.” Hungary, he said, has a lot to learn from Israel, “because Israel teaches the world and us also, that if you don’t fight for something you will lose it, because nowadays you have to fight for everything in the modern world.”Orban, whose brand of “illiberal democracy” has strained his country’s ties with large parts of the European Union, said in reference to Netanyahu that he was happy to welcome a “dedicated patriot” to Hungary.“I am convinced that patriotic governments are nowadays the successful governments in the world, and successful countries in the future will be the ones which do not disregard national identity, national interests, [and] instead keep it in the forefront of their action,” he said.Orban, who has taken a very tough approach to migrants, said he told Netanyahu during their discussions, “We respect and acknowledge the right of Israel to self-defense, and this is something we also believe of ourselves, that we would like our self-defense to be acknowledged by others.”He said Hungary is in a “serious substantial debate” with the EU over the migrant issue “because we do not want to have a mixed population. We do not want to change the ethnic mix in this country by any artificial outside pressure. We would just like to remain the way we are, even if I have to admit that we are not perfect.”Netanyahu noted that Budapest was the birthplace of Zionist visionary Theodor Herzl and thanked Orban for “standing up for Israel in international forums. You’ve done that time and again. We appreciate this stance, not only because it’s standing with Israel, but it’s also standing with the truth.”Before their meeting – which included the signing of agreements dealing with cultural exchanges, technology and economic cooperation – Orban greeted Netanyahu and his wife, Sara, with full state honors at the parliament in Budapest.Netanyahu met with President Janos Ader later in the afternoon and in the evening was Orban’s guest for dinner.Netanyahu also met during the day with the Hapoel Beersheba soccer team in town for a Champions League qualification match tomorrow against Budapest Honved.