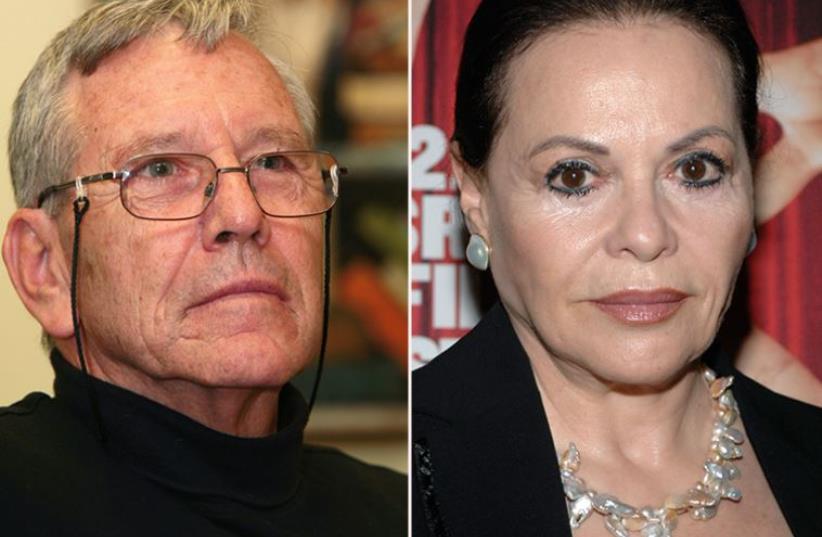 Amos Oz and Gila Almagor
(photo credit: REUTERS)
Advertisement
Politicians from the Right and Left slammed the nongovernmental organization Im Tirtzu’s newest campaign, which labels hundreds of Israeli cultural figures as foreign agents for their affiliation with left-wing groups.The campaign poster, headlined, “Foreign agents in culture,” features prominent cultural figures including writers Amos Oz and Yehoshua Sobol, actress Gila Almagor and Hadag Nahash lead vocalist Sha’anan Streett, and names them as members of left-wing organizations the New Israel Fund, B’Tselem – The Israel Information Center for Human Rights in the Occupied Territories, and Yesh Din – Volunteers for Human Rights.Prime Minister Benjamin Netanyahu, when asked on his way back from Cyprus to Israel about the campaign, said that he was opposed to using the term “traitor,” and that Israel is a democracy where there are many opinions.By the same token, he added, he was – like the majority of the country – opposed to the Breaking the Silence group, which he said libels the IDF.Culture and Sport Minister Miri Regev also came out against the Im Tirtzu campaign.“Along the right of the public to know, statements that may lead to incitement and violence must be avoided. Harm to any person because of political views is unacceptable,” she wrote on her Facebook page.The campaign comes on the heels of Regev’s controversial “loyalty in culture” bill, which reached the Knesset Education, Sports and Culture Committee earlier this week.The legislation seeks to prohibit state funding of cultural institutions that incite to racism, violence or terrorism, or support armed conflict or terrorism against Israel.Opposition leader Isaac Herzog called the Im Tirtzu campaign “Israeli McCarthyism.”“This McCarthyism, in a shameful effort is trying to take control of Israel. The creative treasure of Israel’s artists and writers will survive forever. The Israeli McCarthyism and the ‘zeros’ who lead it will disappear just as they disappeared in the United States. The question is only when, and how much it will cost us,” Herzog said.MK Tzipi Livni (Zionist Union) said Im Tirtzu, led by the government, is “destroying Israel from inside and alienating it from the outside world.“The real ‘foreign agents’ are Miri Regev and the government,” she said.Yesh Atid chairman Yair Lapid said “all fair-minded people, Right and Left, needed to come out against Im Tirtzu’s ugly, divisive and violent campaign.“In the State of Israel – the state of the people of the book, the Jewish people – artists and writers and cultural figures must not be persecuted. With Im Tirtzu’s campaign of hatred that incites to violence, a redline has been crossed.”Education Minister Naftali Bennett, the chairman of Bayit Yehudi, also came out against the initiative and said in a tweet: “The campaign against the artists is embarrassing, unnecessary and disgraceful.”Jeremy Saltan, the chairman of Bayit Yehudi’s Anglo Forum, added: “No one should be in the business of labeling Jewish Israelis. This is something the Right should be united on.”Meanwhile, MK Dov Henin (Joint List) asked Attorney-General Yehuda Weinstein to open a criminal investigation into Im Tirtzu for incitement. The campaign creates a “real danger of serious violence,” Henin said.MK Esawi Frej (Meretz) wrote a letter to Defense Minister Moshe Ya’alon, a member of the Likud, asking him to declare Im Tirtzu an illegal organization.“I am asking you to act immediately using your authority under the Defense Emergency Regulations to declare the extreme-right movement Im Tirtzu a prohibited organization,” Frej wrote. “This is a movement that systematically encourages, with its violent propaganda that incites against citizens and groups, the destruction of the rule of law in Israel.”Matan Peleg, the head of Im Tirtzu, defended his group’s campaign in an interview with Army Radio and said it does not call for incitement but rather aims to inform the public of artists’ affiliations.“We really exposed which groups these cultural figures are members of. I want to know that the listener, if he hears Yehoshua Sobol speak, that he will know that he is a member of Yesh Din. I want Israeli society to know that Gila Almagor is a member of B’Tselem,” he told Army Radio.The Im Tirtzu campaign follows the opening and closing of a preliminary inquiry by the deputy attorney-general for special affairs into a similar campaign that the group conducted in December. In that initiative, the NGO released a video that gave the names of senior officials in Breaking the Silence and called them “foreign agents.”The exploratory examination sought to determine if this constituted incitement, and concluded that it did not.The use of the language “foreign agent,” first in the video and now in the campaign targeting artists, echoed the wording of Likud MK Yoav Kisch’s recent proposal that aimed to identify organizations that are funded by a “foreign political entity” and label them as “moles” of the country that funds them.The legislation strives to prohibit government ministries and the IDF from cooperating with them in any way, unless the justice minister orders an exception.Herb Keinon and Nathan Wise contributed to this report.