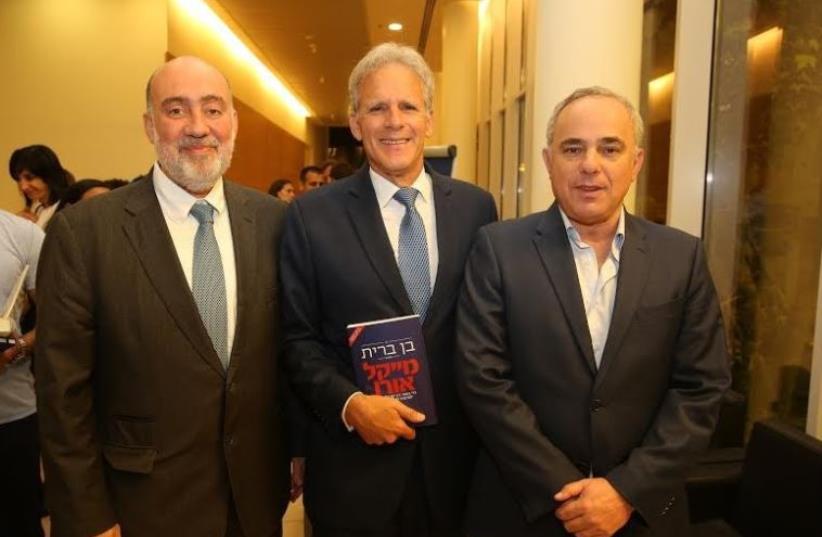 Launch for the Hebrew translation of former ambassador to the US and Kulanu MK Michael Oren’s book Ally.
(photo credit: ITZICK BIRAN)
Advertisement
In one of the most positive statements a cabinet member has made about the world powers’ agreement with Iran, National Infrastructure, Energy and Water Minister Yuval Steinitz said Monday the deal was not as bad as it could have been.“Are there holes in the deal? Could there have been a better deal? Yes. Could it have been worse? Yes,” Steinitz said at the launch for the Hebrew translation of former ambassador to the US and Kulanu MK Michael Oren’s book Ally at the Interdisciplinary Center Herzliya, positing that the US decided in advance that it wanted a deal with Iran.“Why wasn’t there a better deal? Because [the US] would have had to put much more aggressive pressure on Iran, even military pressure, and they weren’t willing to take that risk,” he said.The minister described his two years leading Israeli efforts against the deal as a “difficult battle.”“Someone in the US, and I think they went too far, made a mistake, thought it would be like when [former US secretary of state Henry] Kissinger met with China and changed the map of the world. Someone thought the same thing could be done and make it [Iran] a partner and an ally. Iran is not China. It’s not a superpower. The proportions are different,” he stated.Steinitz declined to answer whether Israel would be better off without the Iran deal.Oren, meanwhile, said the Obama Administration has “made mistakes almost everywhere in the Middle East – Libya, Syria, Iran, Iraq, Yemen,” but when it comes to Iran, in particular, he hopes that he was the one who was mistaken.Iran is “such a critical issue for our future that I hope they’re right and I’m wrong,” he said.Channel 10 reporter Moav Vardi, the moderator of the panel, called US-Israel relations a “f***ing balagan [mess],” and Oren agreed with the characterization, joking that there is no good word in Hebrew to describe it since balagan is actually a Russian word.Steinitz, however, argued that Israel’s fight against the Iran deal did not harm relations with the US.“I think [US President Barack] Obama and his government better understands, and has more empathy toward Israel than it did a few years ago,” he said.Oren and Steinitz also said Israel needs to be able to stand up to the US sometimes without it meaning that relations between the countries are in a crisis.“We have to take responsibility,” Oren said. “We have to accept the aid they generously give us, but sometimes we have to say ‘thanks, but.’ Maybe the time has come for us to stand on our two legs; we already did in 1948-56.”When Vardi asked Oren if he feels Netanyahu always gives in to pressure from Obama, Oren disagreed and pointed to the prime minister’s overtures to China and Japan as ways Israel is trying to not depend solely on the US.Steinitz called US-Israel ties a “friendship between a giant and a dwarf, and said: “It’s important that the dwarf be able to maintain his pride and respectfully argue with the giant.”He also recommended that Israel finalize its memorandum of understanding with the US over military aid before Obama finishes his term, saying: “We don’t know who will sit in the White House in a year; it’s a big mystery.”As for that mystery, when Vardi asked Oren if he prefers leading Democratic candidate Hillary Clinton or Republican front-runner Donald Trump, the MK joked that he had to harken back to his ambassadorial instincts.“Right, Left, up, down – we have the same interest in a strong, confident America with a leadership role in the region,” Oren said.Following the event, Oren addressed Democratic candidate Bernie Sanders claiming not to know who he is in a recent interview: “I don’t care, but it’s strange. I only met with him about five times [as ambassador].”