Stern made the remarks against the backdrop of heart-breaking images from Europe, which is struggling with its biggest refugee crisis since World War Two. 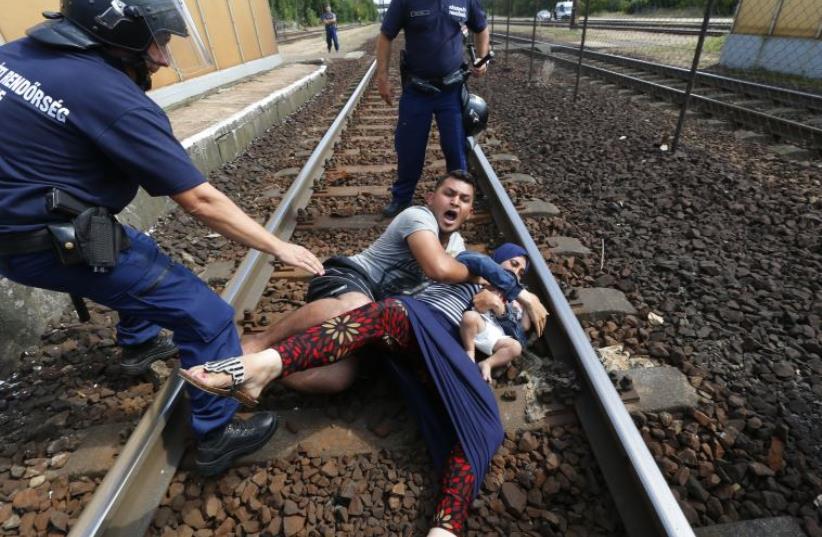 Hungarian policemen stand by the family of migrants as they wanted to run away at the railway station in the town of Bicske
(photo credit: REUTERS)
Advertisement
Israel should permit a number of refugees from the Middle East who are now clamoring to reach Europe to resettle in the country, a lawmaker from the centrist Yesh Atid party said on Friday.Elazar Stern, who is due to take a seat in the Knesset to replace the departing former education minister Shai Piron, told Army Radio on Friday that the Israeli government should allow a symbolic number of refugees into the country on humanitarian grounds, just as it did in the late 1970s when it agreed to absorb the Vietnamese "boat people."Stern made the remarks against the backdrop of heart-breaking images from Europe, which is struggling with its biggest refugee crisis since World War Two.Some of the 4 million Syrians who have fled war seek safety in the West, adding to numbers of people escaping violence and hardship in Africa and Asia."I would take in a boat or two, just as [then-prime minister Menachem] Begin did [with the Vietnamese refugees]," Stern said. The former army general said that he was mindful of the problematic aspects of allowing non-Jewish refugees into Israel, since some could argue that it sets a precedent that requires the state to open its gates to Palestinians who fled or were expelled in the 1948 war.Nonetheless, it's a risk worth taking on humanitarian grounds, Stern said."I've been hearing people say how shocked they are that the Gulf states aren't taking any people in," he said. "Perhaps Israel's involvement will spur these countries to take action."About 30-40 people drowned in the Mediterranean after a dinghy carrying 120-140 Somalis, Sudanese and Nigerians deflated, causing panic on board, the International Organization for Migration said in an emailed statement on Friday.The migrants had sailed from Misrata in Libya, but after 6-7 hours their boat began to deflate and some people fell into the water, IOM spokesman Flavio di Giacomo said in the statement. There were 91 survivors, he said.Earlier IOM said it had a report of 40-50 people missing.A group of around 500 migrants, marching on a Hungarian motorway towards the Austrian border, broke through a police barricade on Friday and continued on the main highway connecting Budapest and Vienna, a Reuters eyewitness said.The group of families, mostly from Syria and Afghanistan, left Budapest's Keleti railway station early on Friday after authorities refused to let them travel to Austria on trains.Many of the people in the column held up pictures of German Chancellor Angela Merkel and chanted "Germany, Germany."Britain will spend a further 100 million pounds ($152 million) on humanitarian aid to address the Syrian refugee crisis, Prime Minister David Cameron said on Friday."Today I can announce that we will provide a further 100 million pounds, taking our total contribution to over 1 billion pounds. That is the UK's largest ever response to a humanitarian crisis," Cameron told reporters during a visit to Spain."Sixty million pounds of this additional funding will go to help Syrians still in Syria. The rest will go to neighboring countries, to Turkey, Jordan and Lebanon, where Syrian refugees now account for one quarter of the population."Earlier on Friday, Cameron said Britain would take in "thousands more" Syrian refugees.Reuters contributed to this report.