Full normalization with Turkey around corner, as Turkish parliament gets accord to ratify 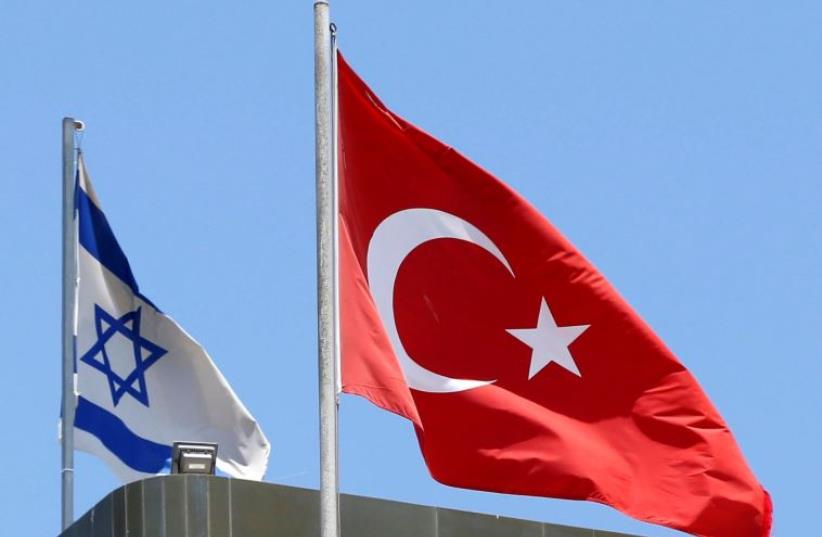 A Turkish flag flutters atop the Turkish embassy as an Israeli flag is seen nearby, in Tel Aviv, Israel June 26, 2016
(photo credit: REUTERS)
Advertisement
Turkish lawmakers submitted the rapprochement agreement with Israel to parliament on Wednesday, the last hurdle to the full normalization of ties and an exchange of ambassadors that is expected to take place the day of ratification.The deal calls for Israel to pay $20 million in compensation to a fund for the families of those killed in the Mavi Marmara incident six years ago, and allow Turkey to provide humanitarian aid to Gaza via the Ashdod port. In exchange, Turkish legislation will prevent any outstanding legal claims against IDF soldiers, and Turkey will be obligated to prevent Hamas from preparing attacks against Israel – including fund-raising – from Turkish soil.Initially, the accord signed at the end of June was to have been brought to the Turkish parliament a month ago, but the timeline was delayed because of the attempted coup on July 15 and its aftermath. It is expected to easily pass the legislature.New ambassadors are expected to be announced as soon as parliament ratifies the deal, which is expected by the end of the week before the parliament goes into summer recess.The accord was submitted to parliament a day after a leaked intelligence document in Germany accused Turkey of financing terrorist groups in the Middle East, including Hamas. Both government officials and experts on Turkey in Israel said this will likely have no impact on the deal, because Israel has been well aware of this situation for a long period.One source said the parts of the agreement dealing with the Turkey-Hamas relationship have remained confidential.German broadcaster ARD published part of a secret German government report on Tuesday, which it said marked the first official assessment linking Turkish President Recep Tayyip Erdogan and Turkey’s government to support for Islamist and terrorist groups. The report said Turkey had become “the central hub for Islamist groups in the Middle East.”ARD quoted the German Interior Ministry report as saying “the numerous affirmations of solidarity and support for the Muslim Brotherhood in Egypt, for Hamas and for armed Islamist opposition groups in Syria by the ruling AKP party and Erdogan underscore their ideological affinity to their Muslim brothers.”The Israeli-Turkish rapprochement was held up for months because of a disagreement regarding Hamas, which has offices inside Turkey. Turkey’s relationship with Hamas was taken into consideration by Israel, one government source said, noting that the parts of the reconciliation agreement dealing with Turkey’s relationship with Hamas have remained confidential.Gallia Lindenstrauss, a research fellow who focuses on Turkey at the Institute for National Security Studies, said she did not think the German report would influence the accord because ties between Hamas and Turkey is “old news.”She said former defense minister Moshe Ya’alon had warned of these ties, and that it was agreed with the Turks that while attacks would not be organized or planned from Turkish territory, Hamas’s diplomatic representation could remain in the country.Lindenstrauss said there was somewhat of an ambivalence in Israel regarding Hamas-Turkish relations. On the one hand, Jerusalem is obviously not happy with it, she said, yet some see certain practical benefits to those ties during times of crisis.She said there was some Turkish involvement in the 2011 deal with Hamas that freed Gilad Schalit. And, in an indication that some believe Turkey has leverage on Hamas, she noted that now with the reconciliation accord, the families of four Israelis missing in Gaza are asking that it be postponed until the bodies of two soldiers believed dead and held by Hamas, and two other Israelis believed to be alive and missing in Gaza, are returned.Turkey, meanwhile, lashed out at Germany for the allegations that it had become a central hub for Islamist groups.“The allegations are a new manifestation of the twisted mentality, which for some time has been trying to wear down our country by targeting our president and government,” Turkey’s Foreign Ministry said in a statement.Tensions between Ankara and the West have been aggravated by the failed coup attempt.Ankara has been incensed by what it sees as an insensitive response from its Western allies, accusing them of only showing concern for the crackdown that has followed the coup.The West worries that Erdogan is using the coup to stifle dissent. More than 35,000 people have been detained in the purge, and tens of thousands of civil servants have been dismissed or suspended from the police, judiciary and schools.Ankara has also accused Europe of not doing enough to tackle militant groups at home. It believes European governments should be a stronger partner in its fight against the Kurdistan Workers Party (PKK), seen as a terrorist group by Turkey, the European Union and the United States.“It is obvious that behind these allegations are some political circles in Germany known for their double-standard attitudes in the fight against terror, including the bloody actions of the PKK terror group which continues to target Turkey,” the Foreign Ministry said. “As a country which sincerely fights against terror of every sort whatever its source, Turkey expects that its other partners and allies act in the same way.”Reuters contributed to this report.