Israeli Ambassador to US: Trump will address problems of Iran deal in time

Israel's Ambassador to the US Ron Dermer spoke at the American Jewish Committee's Global Forum in Washington. 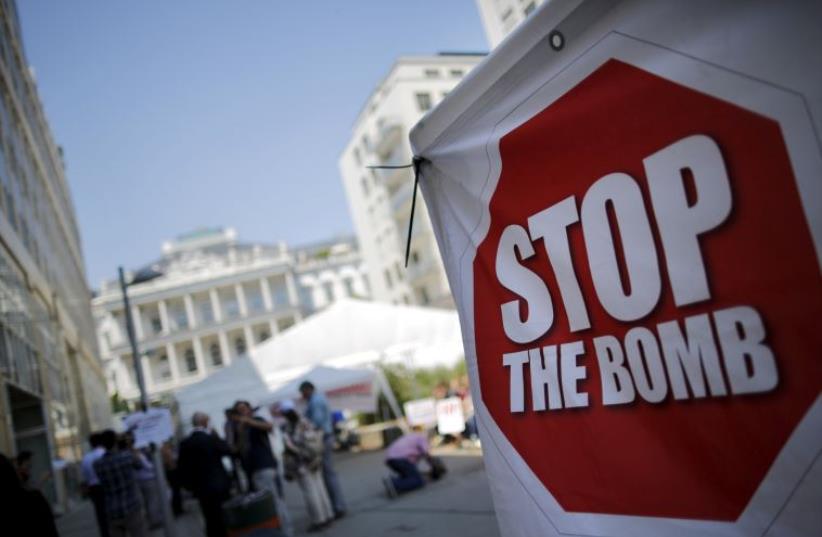 A sign which reads "Stop the Bomb" is seen as protesters gather outside the hotel where the Iran nuclear talks were being held in Vienna
(photo credit: REUTERS)
Advertisement
WASHINGTON – Israeli Ambassador to the US Ron Dermer said that those criticizing President Donald Trump’s lack of action on his campaign promise to “rip up” the Iran deal should be patient as the administration is working through how to address the deal’s flaws.Speaking at the American Jewish Committee’s Global Forum in Washington on Monday, Dermer specifically singled out the administration’s acknowledgment of the “fatal” flaw of the deal’s sunset clause, the agreement that allows Iran to grow its nuclear infrastructure to industrial scale in the future.“If those restrictions didn’t have an expiration date then we could have a debate,” he said. “The view of the new administration is that this deal is not in the interest of the US. I think you can expect a very real pushback [against Iran]. They have to be smart about it and get their ducks lined in a row. So I’m not surprised they didn’t rip up the deal. I think you’ll see this play out over the next couple of years.”Dermer also doubled down on Prime Minister Benjamin Netanyahu’s address to Congress two years ago and said that bold move has paid off in terms of how Israel is perceived in the region.“I’m not sure if there is another non-military act that strengthened Israel’s image in the region. The international community saw we’re not a vessel of the United States and showed there are times we disagree and we have to stand up,” he asserted.Dermer argued that lack of American presence in the region during the Obama administration has opened a doorway for Israel to flex its muscle a bit more in the region.“Arab states see this Iranian tiger and ISIS leper, and the 800-pound gorilla left the building. And now they see a 300-pound gorilla with a kippa on their head,” he joked, adding that he sees a greater potential for Israel to work in concert with Gulf Cooperation Council states against Iranian hegemony.