Israel’s ambassador in Washington Ron Dermer says boycott movement is promoted by “fanatics and fools” who are “promoting a new anti-Semitism.” 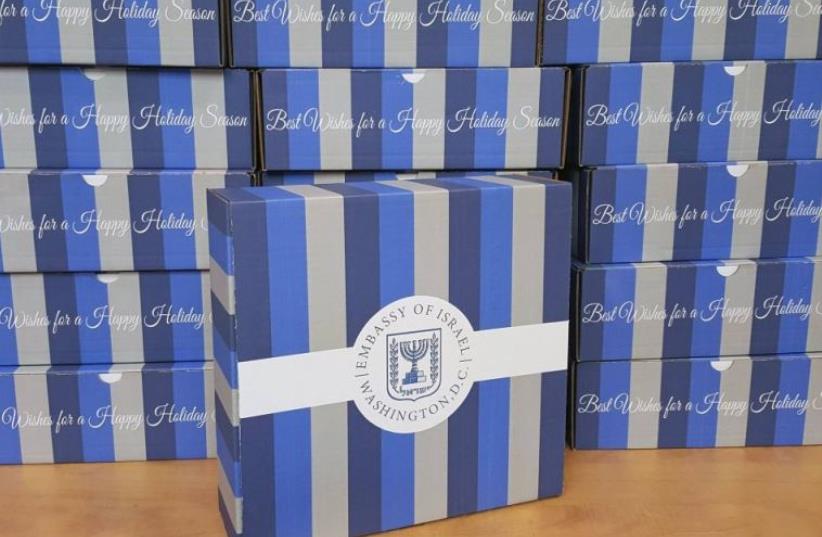 Holiday gifts sent by Israel's Ambassador to the US Ron Dermer
(photo credit: TWITTER)
Advertisement
Israel’s ambassador to the United States, Ron Dermer, sent holidays gifts with products produced in settlements to strike back against those advocating a boycott of Israel.In a letter posted to the ambassador’s Twitter account, Dermer said the Boycott, Divestment and Sanctions movement, or BDS, was promoted by “fanatics and fools” who are “promoting a new anti-Semitism.”“In response to this effort to cast a beacon of freedom, tolerance and decency as a pariah state, I have decided this holiday season to send you products that were made in Judea, Samaria and the Golan Heights,” Dermer wrote, using the Hebrew terms for the West Bank. “I hope you will enjoy them.”

This year I decided to send a gift for the holiday that would also help combat BDS pic.twitter.com/43haadtzvm

The letter accompanied a photograph of holiday gift boxes labeled “Embassy of Israel Washington, D.C.”In his letter, Dermer said the BDS movement is an attempt to destroy the Jewish state.“The main forces behind this movement are fanatics who actively seek to eliminate Israel,” Dermer wrote. “Unfortunately they are occasionally joined by fools who naively believe that in promoting BDS, they are advancing peace between Israelis and Palestinians. But regardless of why they support BDS, the fanatics and the fools are simply promoting a new anti-Semitism.”