It is not time to recognize a Palestinian state, says France's Macron 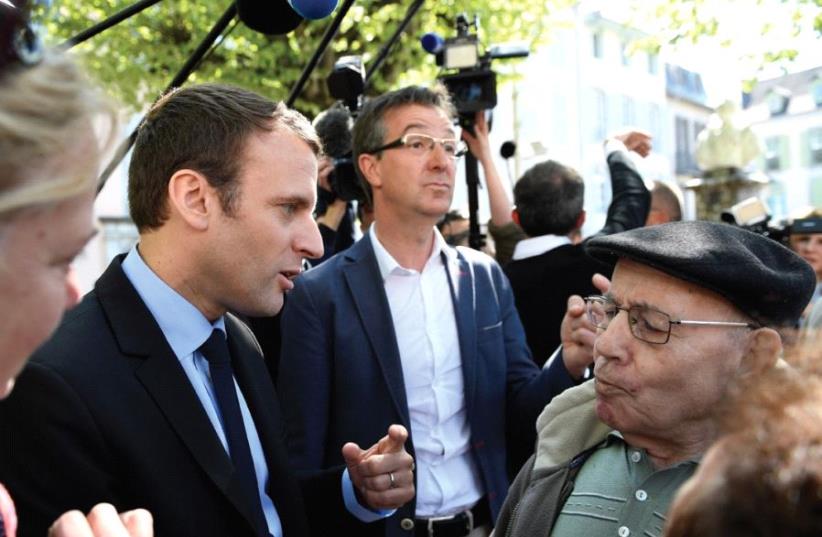 EMMANUEL MACRON talks with residents during a presidential campaign visit yesterday in Bagneres de Bigorre, France.
(photo credit: REUTERS)
Advertisement
PARIS – French independent presidential candidate Emmanuel Macron said on Sunday that recognizing a Palestinian state at this stage would serve nothing.The important task now is to create an atmosphere that will enable a peace process to be launched, the 39-year-old said in an interview on the Jewish community Radio J station in Paris.Less than two weeks before the first round of elections, French voters seem increasingly indecisive about which candidate to choose. Macron was not considered early in the campaign, but has recently polled as the front-runner. His interview was an eye-opener – as far as his approach on Middle East issues in general – and on the Syrian War, Iran and the Israeli-Palestinian conflict in particular.
French FM at Middle East summit in Paris, 15.1.17
When asked if Iran and Hezbollah could be considered allies, in light of their battling Islamic State, Macron gave a strong, negative reply: “Francois Fillon at some point in 2015 presented an indulgent approach vis-à-vis Hezbollah.This was not long ago, and I don’t think that Hezbollah has changed profoundly. There can be no indulgence concerning Hezbollah.’’ Iran will surely sit at the negotiating table when the transition to a new Syrian government is discussed, “but this does not mean that we will become allies of Iran,’’ he said.Macron also was very direct in speaking about Israel and the Palestinians. “My line is clear: We are friends of the State of Israel and partners for Israel’s security. We will always be in this camp... At the same time, from the beginning, France has always worked for the recognition of two states. And in this context, I would like to advance with the recognition of two states and with efforts to pacify the region,’’ he said.“The policy of Netanyahu (on settlements) is unhelpful. It does not help to pacify the region or to stabilize the conflict. The nature of his policies does not increase collective security.’’Asked if, as president, he would recognize a Palestinian state, Macron said, “The key is recognizing two states in the region, with diplomatic balance work to build peace. If France commits to a unilateral process of recognizing Palestine, we are contributing to an imbalance and will weaken France’s ability to play a role in regional stability and in this conflict... This is why I will put all my energy and work with others to create a pacifying atmosphere which could lead us to a peace agreement.’’ Much like his political rivals – Francois Fillon on the Right and Benoit Hamon on the Left – Macron opposes any attempt to boycott Israel. Even when he was Minister of Economy, Macron expressed his objection to BDS campaigns, most specifically when he visited Israel and the Palestinian Authority in 2015.“French law prohibits that,” Macron said. “There are several laws against boycotting. There is no question of changing that law and no question of acting indulgently on this. For me, these are anti-Zionist moves, thus profoundly antisemitic.’’ Referring to a BDS demonstration in the center of Paris on April 1, Macron added, “These people are taking the wrong route... eradicating our history. I condemn this approach both legally and politically.’’ Macron concluded, “You are all familiar with my disagreements with (former Prime Minister) Manuel Valls, which led me to establish the ‘En March’ movement. But on this issue, I fully agree with him apropos that anti-Zionism leads directly to antisemitism.”