Ivory Coast to learn from Israel how to combat terrorism

The president of The Ivory Coast's National Assembly attributes the surge in terrorism to world wide unemployment. 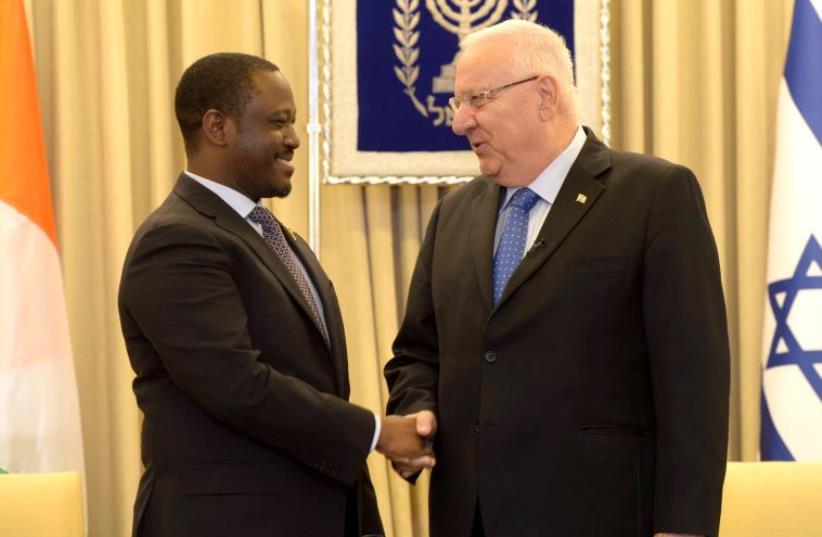 President Reuven Rivlin meets with the president of The Ivory Coast's National Assembly
(photo credit: PRESIDENTIAL SPOKESPERSON OFFICE)
Advertisement
The Ivory Coast is eager to learn from Israel’s experience in fighting the universal scourge of terrorism, Guillaume Kigbafori Soro, the president of the West African nation’s National Assembly, told President Reuven Rivlin on Wednesday.Soro and his delegation came to Israel to strengthen bilateral relations and cooperation, and to study how to cope with the growing threat of terrorism, which until recently was something with which the Ivory Coast was unfamiliar, until it erupted in neighboring Mali.Soro attributed the surge in terrorism to worldwide unemployment, noting that today in many countries young people are increasingly effecting change and the decision-making process.“The so called ‘Arab Spring’ was started by young people, and in Africa unemployed young people are the infrastructure for terrorist recruitment,” he said.Rivlin, in welcoming his guests, pointed out that both Israel and the Ivory Coast are democracies facing difficult challenges in implementing their democratic values. In Israel’s case, he said, one of those challenges was being a Jewish and democratic state with Arabs accounting for 20 percent of the population.“We have the problem of two nations in one state,” he said.“This creates a difficult mission for democracy.”Rivlin also spoke of the social gap between the rich and the poor.“These are both problems that pose a danger for democracy,” he said.While the democratic system of neither Israel nor the Ivory Coast is ideal, Rivlin conceded, “We have nothing better.”Rivlin said that the Ivory Coast – in fact all of Africa – is important to Israel.Israel has for some time been seeking observer status in the African Union. Rivlin raised the subject with Soro, who pledged the Ivory Coast would do everything possible to make that happen.He said that he and his delegation were greatly impressed by all that they had seen in Israel, and full of admiration of how a people that had suffered so much could achieve so much in so relatively short a time.There was also an emotional side to the visit to Israel.The delegation had seen an olive tree that was planted by the first president of the Ivory Coast, Felix Houphouet- Boigny, who visited Israel in 1962, two years after his country had achieved independence.Boigny had donated a 10,000-tree forest to Israel and had planted the first saplings together with president Yitzhak Ben Zvi, who was Israel’s second head of state. During that visit he had also signed a treaty of mutual friendship and an agreement for cultural and technical cooperation.