France has ‘deep concern’ over demolition of structures it built. 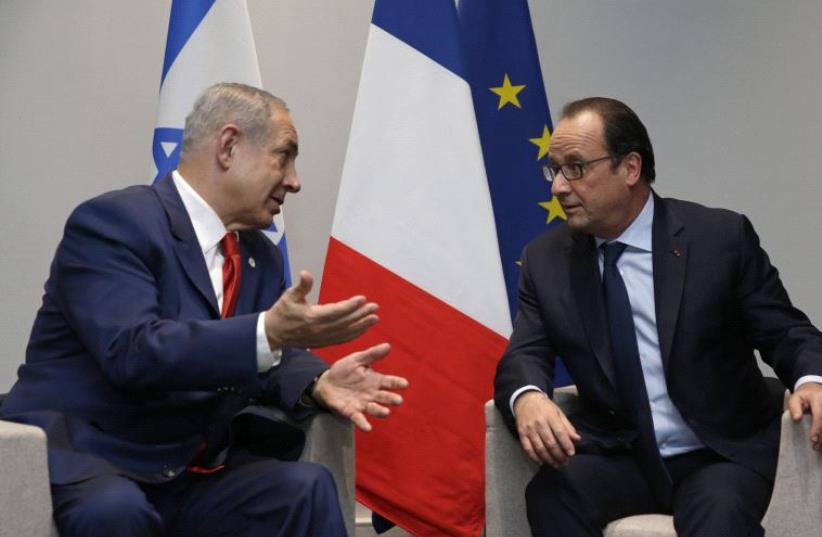 French President Francois Hollande (R) and Prime Minister Benjamin Netanyahu at the World Climate Change Conference 2015 (COP21) at Le Bourget, near Paris, France, November 30, 2015
(photo credit: REUTERS)
Advertisement
Follow the rules, and structures Paris is building for the Palestinians will not be destroyed, Israel told France on Thursday.That message was delivered through a statement issued by Foreign Ministry spokesman Emmanuel Nachshon, responding to a French Foreign Ministry statement on Wednesday condemning Israel’s demolition of what it said were humanitarian facilities funded by international donors, including France, in al-Aqaba.Al-Aqaba is located in the northern Jordan Valley in Area C, the 60% of the West Bank that – according to the 1995 Israeli-Palestinian Interim Agreement – is under full Israeli control.“This is the fourth time that Israeli authorities have destroyed humanitarian structures funded by French humanitarian assistance since the start of 2016,” the French statement read.“France expresses its deep concern at the continuation – at an unprecedented rate – of the demolition and confiscation of structures intended for the Palestinian population. It calls on the Israeli authorities to put an end to these operations which are contrary to international law and jeopardize the two-state solution to which France is attached.”Nachson, however, said that the French claims were mistaken.“France, like the other European states, is obligated to coordinate building in Area C with Israel,” he said. “When it does not do this, it cannot then complain that Israel destroyed illegal structures.”Nachshon explained that according to the Interim Agreement, which was signed in the presence of European and international representatives, civil responsibility in Area C, including planning and construction, is under Israel’s control.“As is standard practice in every law-abiding country, Israel does not permit building without the necessary permits,” he said.Nachshon said that in the particular instance in al-Aqaba, construction was undertaken in an area not meant for housing.Israel and the EU have been at odds for months over construction in Area C, with the Europeans claiming that Israel is not allowing any Palestinian development there, and Israel charging that the EU is simply trying – through the funding of the structures – to create facts on the ground.