Jewish parliamentarians from around the world meet in Knesset

A panel of members of the Knesset Christian Allies Caucus from the coalition and opposition also discussed BDS at the special meeting. 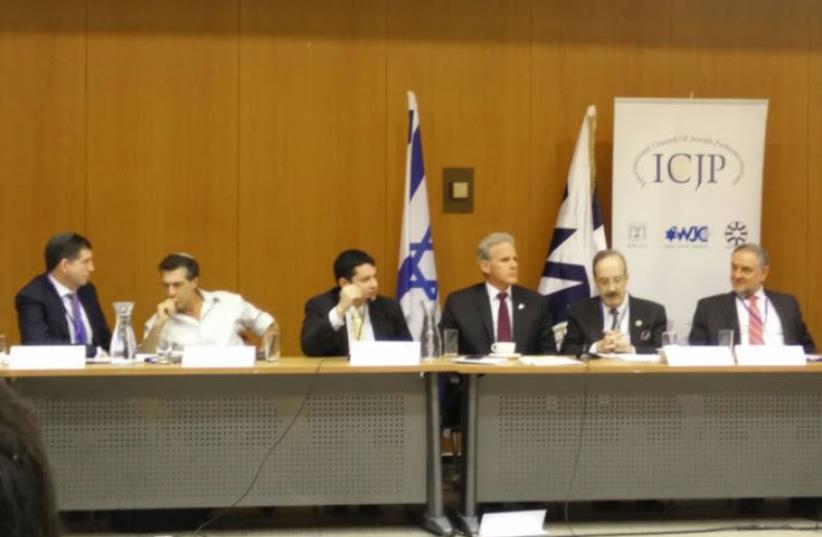 Jewish parliamentarians from around the world meet in Knesset
(photo credit: LIA LANDS)
Advertisement
Lawmakers from around the world met with MKs and ministers as part of the International Council of Jewish Parliamentarians’ conference in the Knesset on Monday.The group is chaired by US Representative Eliot Engel of New York (D) and includes former Canadian justice minister Irwin Cotler, French MP Meyer Habib, who represents expats in Israel and other Mediterranean countries, as well as parliamentarians from Chile, Brazil, Belgium, Romania, Hungary and Ukraine and operates under the auspices of the World Jewish Congress.Following a dinner in the Knesset Sunday night, with Knesset Speaker Yuli Edelstein, the MPs had a full day of meetings with Israeli lawmakers.Education Minister Naftali Bennett presented a very sunny viewpoint, saying the situation of the Jewish people in Israel is better than it has been since the days of King Solomon. He pointed to progress in haredi (ultra-Orthodox) and Arab integration, especially in the workforce, and talked about Israel’s strong cyber security sector.“I’m not worried about Israel. I’m worried about Diaspora Jews. That’s what keeps me up at night,” Bennett said.Assimilation is as big a loss to the Jewish people as the expulsion of the 10 tribes, he said, adding that all Jews must be accepted and welcomed.“Reform, Conservative or Orthodox, a Jew is a Jew is a Jew. And if I get heat for that here in Israel, I say, bring it on,” Bennett added.Knesset Subcommittee on Foreign Relations and Public Diplomacy chairman Michael Oren (Kulanu) gave the parliamentarians an overview of the panel’s activities, and discussed the threat of boycotts of Israel.Oren called boycotts “a strategic threat and a phenomenon that should be of concern to all Jewish lawmakers.”The Kulanu MK and the other parliamentarians discussed possibilities to cooperate in the fight against the Boycott, Divestment and Sanctions movement and the delegitimization of Israel.A panel of members of the Knesset Christian Allies Caucus from the coalition and opposition also discussed BDS.The MKs applauded Engel for his opposition to the world powers’ deal with Iran, despite the immense pressure in the Democratic Party and beyond to support it.The ICJP also met with Prime Minister Benjamin Netanyahu, opposition leader Isaac Herzog (Zionist Union) and Yesh Atid chairman Yair Lapid, among other senior MKs.