Deputy minister Kara estimates that there are over 50,000 Druse refugees in Europe that have fled over the past four years from Syria and Lebanon. 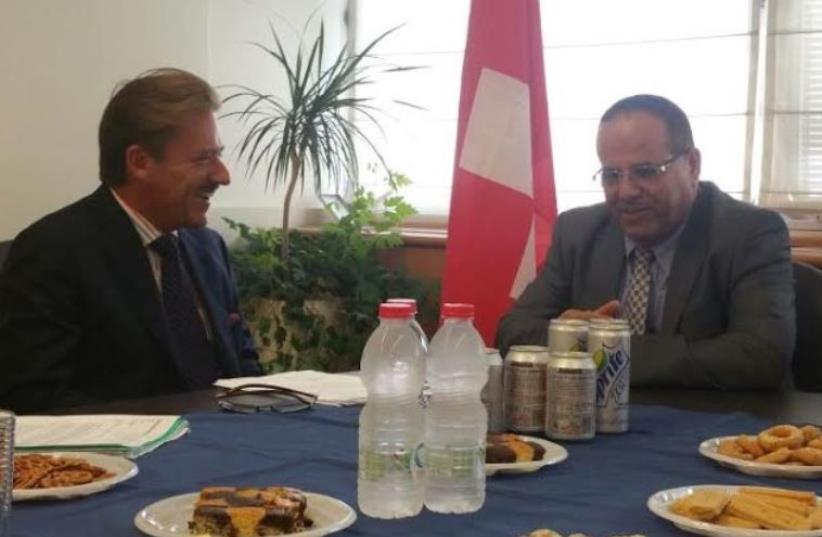 Switzerland’s ambassador to Israel Andreas Baum (Left) and Likud Deputy Minister Ayoub Kara, September 16, 2015
(photo credit: Courtesy)
Advertisement
Likud Deputy Minister Ayoub Kara, the acting minister of the Regional Cooperation Ministry, met Wednesday with Switzerland’s ambassador to Israel to request that Syrian Druse refugees not be deported from the European country, after the refugees, located in Geneva, turned to Kara to prevent their deportation.Kara said the Swiss ambassador, Andreas Baum, promised he would work urgently to stop the deportation, as well as try to improve the situation of those families considered to be political refugees.During the meeting, Kara and the ambassador spoke with refugees in an effort to calm them down and convince them to stop the hunger strike they began last week.Asked by The Jerusalem Post Wednesday what else was discussed, Kara said they also talked about the refugee crisis in Europe, particularly the Druse among them.The deputy minister estimated that there are more than 50,000 Druse refugees in Europe who have fled over the past four years from Syria and Lebanon.Among them is a relative of the recently assassinated Druse leader, Sheikh Wahid Balous, who was killed in Sweida, Syria.Druse spiritual leader Sheikh Maufak Tarif told The Post last week that if Islamic State were to get past Sweida province – where Jabal al-Druse is located – it would put Jordan and the Israeli border areas at risk.