"Those who pit us against each other do so, not out of spiritual beliefs, but rather for their own political and financial enrichment," said Kareem Abdul-Jabbar. 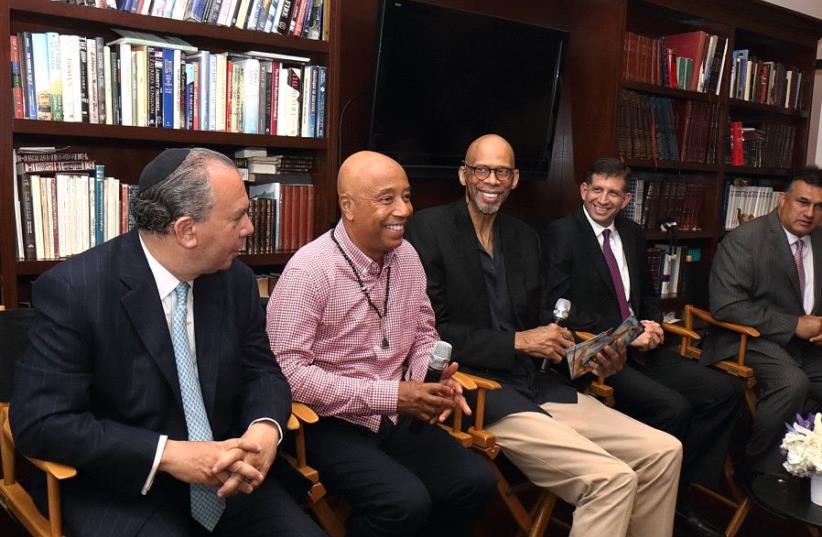 Basketball Legend Kareem Abdul-Jabbar and Media Mogul Russell Simmons Join in Special Iftar Dinner Hosted by Consul General of Israel Sam Grundwerg.
(photo credit: MICHELLE MIVZARI)
Advertisement
NEW YORK – Basketball legend Kareem Abdul-Jabbar shared an iftar dinner, the meal Muslims eat at sundown during Ramadan, with Consul-General of Israel in Los Angeles Sam Grundwerg at his official residence.The dinner, held on Thursday evening, was organized in partnership with the Foundation for Ethnic Understanding, dedicated to strengthening relations between communities and fighting intolerance.Guests included some 60 leaders and activists from the Muslim and Jewish communities of Los Angeles as well as City Councilman Paul Koretz.“The core values that Ramadan represents are the same values that the other faiths hold so dear: family, community, charity for the weak and needy, and a time of spiritual reflection,” Grundwerg told The Jerusalem Post. “These are the same values that everyone can identify with and must identify with.”The iftar dinner, which Grundwerg described as “an amazing demonstration of how community leaders and people of goodwill can come together,” included interfaith dialogue lead by guest of honor Abdul-Jabbar, the meal itself, as well as a Muslim prayer service held in the consul’s living room.Hosting NBA legend Abdul-Jabbar, Grundwerg said, was a personal honor. The former center’s spent his 20-year career with the Milwaukee Bucks and the Los Angeles Lakers.He was named league MVP a record six times. He converted to Islam in 1971, at the age of 24.“The core values of the Jewish, Christian, and Muslim faiths are the same: compassion, tolerance, and helping those in need,” Abdul-Jabbar, 70, said.“Those who pit us against each other do so, not out of spiritual beliefs, but rather for their own political and financial enrichment.”“That’s why we faithful must take every opportunity to come together to share our message of inclusion with those who sincerely seek a peaceful and prosperous world,” he said.Grundwerg said, “I happen to be an Orthodox observant Jew and I have an appreciation for fasts and how powerful that ritual is. I fast a few times a year, but I’m always filled with awe and respect for devout Muslims who are committed to fasting every day for an entire month, especially when Ramadan falls during the summer.”Grundwerg added that the celebration aimed to demonstrate Israel’s commitment to meaningfully engage with other communities and faith leaders. Jews and Muslims have more in common than it seems, he said.“Israel has over a million Muslim citizens and they play such a vital role in all aspects of society,” he told the Post.“Talking about the fact that there is a lot of overlapping and shared values helps in the long run to bring these communities together.”Ariane Mandell contributed to this report.