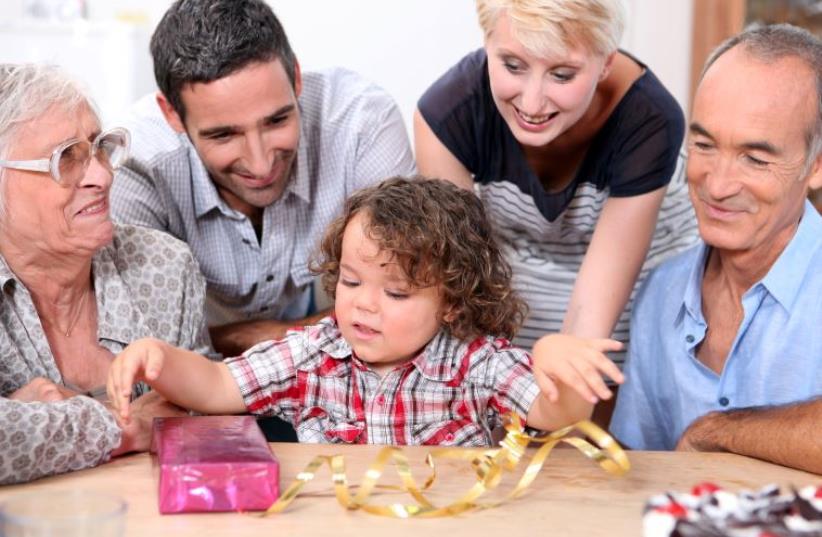 Parents and grandparents with a boy on his birthday
(photo credit: ING IMAGE/ASAP)
Advertisement
Following a day of stormy debates, the Knesset plenum on Wednesday night unanimously approved Finance Minister Moshe Kahlon’s plan to increase tax-credit points for working parents.The approved measure aims to significantly improve the net wages of parents with children six years old and younger and is a key component of the minister’s “Net Family” tax cut program. In addition to extra tax points, the plan calls for benefits such as subsidies for after-school activities, expansion of work grants and reduced taxes on baby clothes, mobile phones and shoes.“This evening, a clear and sharp message was sent from the honorable house of legislation to the citizens of Israel,” Kahlon said on Wednesday night. “The Knesset today says in a clear voice to the working citizen that it also knows how to give, not just take. It tells working citizens, ‘You sent us to represent you and we are working for you.’” The boost in tax credit points will take effect retroactively, beginning January 1, 2017.The Wednesday night vote followed a Finance Ministry approval in a second and third reading that morning – a week after the cabinet authorized the legislation.The program increases and equalizes the amount of tax points received by mothers and fathers of young children – thereby boosting their disposable income from salaries.A single credit point is worth NIS 215 per month, according to the Finance Ministry.Today, men are entitled to credit points for children on a gradual scale, from the day of birth until four years of age. At the time of a child’s birth, men receive one point, followed by two points from ages one through three, then one point for ages three and four.Women, meanwhile, are entitled to half a point at the time of a child’s birth and two points from the first through sixth birthdays.According to the newly approved plan, mothers and fathers will both receive 1.5 tax points from the child’s date of birth through age one, and then 2.5 points from ages one through six.“The Net Family program brings good news to young working couples, encourages entry into the job market and increases equal opportunity,” Kahlon said. “Above all, it is a program that sees people as people rather than as numbers.The addition of credit points to parents that was approved today will increase the disposable income of working families by thousands of shekels a year. All these years we have been told that growth will seep into the lower strata and today we say no – we will turn over the money to the weaker sectors and from there we will grow the economy.”While the tax credit increase received overwhelming support from both coalition and opposition politicians, the law’s unanimous passage did not come without a series of disputes throughout the day.After initially passing the legislation in a second and third reading Wednesday morning, Finance Committee members conducted a repeat vote that afternoon, before bringing the legislation to the plenum for final approval. The revote was held because opposition members demanded the law’s official name no longer include budgetary years 2017-2018 alone, and instead reflect a permanent change. That issue sparked a fiery debate in committee in the morning that continued during the plenum that evening.The revised version, which the committee approved by revote, mandates the finance minister to report to the Finance Committee 60 days before the end of the 2017- 2018 budget year as to whether the order is being extended or not.“For the first time in the history of the Knesset, a law that has won the sweeping support of the coalition and the opposition, the opposition submits a request for a revision, even though it supports it,” Finance Ministry chairman Moshe Gafni said in the morning committee session before the revote.One member of the opposition, MK Mickey Levy (Yesh Atid), stressed that while the original bill represented “a very good trend,” the legislation was flawed because of its presentation as a temporary order.“This way it does not really encourage people to go to work,” he said.Although the bill was written for budgetary years 2017-2018, Gafni pointed out that government representatives would have to come to the Finance Committee and inform its members in order to make changes after this time.“It would be interesting to see the finance minister who would stop this, after the public has already become used to the benefit,” he said.