There were also Border Police officers, whom the Knesset honored for their work protecting the population from terrorism. 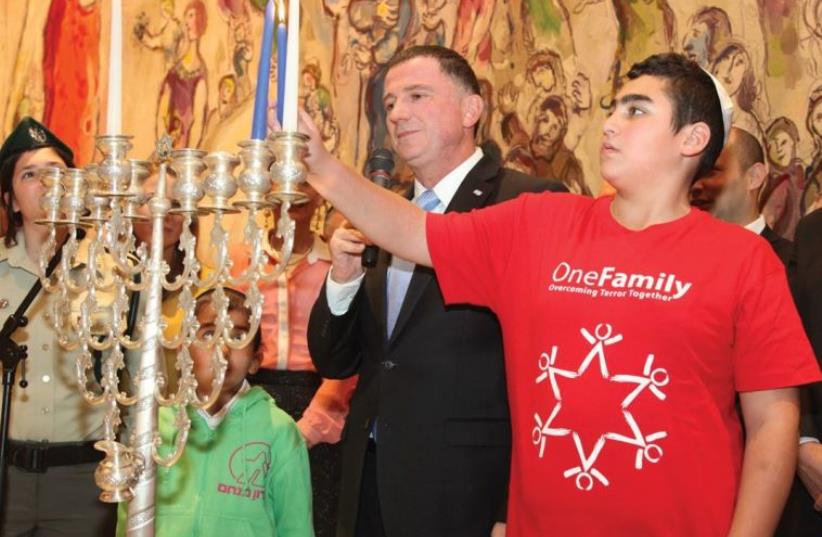 KNESSET SPEAKER Yuli Edelstein lights Hanukka candles with children who are terrorism victims, children with cancer and Border Police officers at the Knesset
(photo credit: KNESSET)
Advertisement
Knesset Speaker Yuli Edelstein and MKs from every party gathered to light Hanukka candles at the Knesset on Monday night.Children recovering from wounds inflicted by Palestinian terrorists and children who lost their parents in attacks, who receive support from NGO One Family, as well as children with cancer, helped by organization Zichron Menachem, were in attendance.There were also Border Police officers, whom the Knesset honored for their work protecting the population from terrorism.Among those called up to light candles was Tzvia Lavie, who will celebrate her bat mitzva on Tuesday.Tzvia’s father, Nehemia, was murdered by a Palestinian terrorist in October while trying to save Adele Bennett, who was stabbed in Jerusalem’s Old City and whose husband Aharon was killed by the same terrorist.Edelstein spoke after the candles were lit and the children’s choir Kids.il accompanied the audience in singing “Hanerot Halalu” and “Maoz Tsur.”“For the first time since the days of the Hasmoneans, we renewed here, in this land, our sovereignty, and that does not allow our enemies to rest,” Edelstein stated. “The children here with us today, who are recovering from their wounds, show us more than anyone else how we cling to life and our routine, despite the difficulties and the pain.”“These are days in which we must, more than ever, look for light and raise it,” he added.The Knesset Speaker wished the attendees “light and warmth in their hearts.”Chantal Belzberg, CEO of One Family, said, “These children have experienced the worst. The trauma stays with them their whole lives. It is important that we all brighten their holidays and help them throughout their lives. I thank the Knesset speaker for inviting the children of the organization to bring light to the nation of Israel.”