Brother of Kulanu chairman and Finance Minister to step down in November. 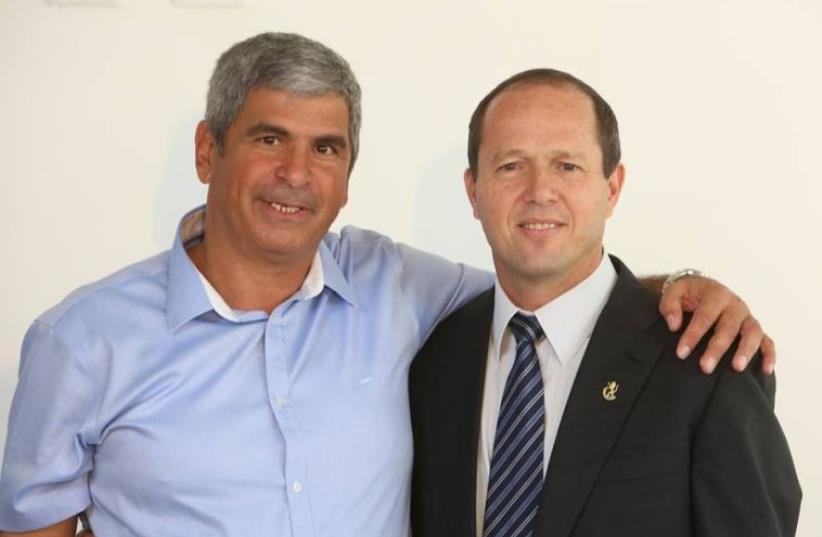 Kobe Kahlon (L) and Jerusalem Mayor Nir Barkat.
(photo credit: FACEBOOK)
Advertisement
Kobe Kahlon, the brother of Kulanu chairman and Finance Minister Moshe Kahlon, resigned from his post as Jerusalem’s deputy mayor after serving the municipality for seven years, City Hall announced on Monday.Kahlon, who served in various leadership positions during his tenure, including as chairman of the city’s Building and Planning Committee, submitted his resignation to Mayor Nir Barkat Sunday night.In a statement, Kahlon described his time at City Hall as “seven good years,” adding that he will return to working as an entrepreneur in the private sector.Prior to the March election, during which he headed his brother’s campaign, Kahlon was implicated in a lawsuit filed by a Tel Aviv entrepreneur who alleged fraud and breach of trust against a company Kahlon was associated with.In the lawsuit, Yoav Aviv, the former CEO of Globus Group, sued Shapir Engineering for NIS 3 million for terminating its agreement to work with Aviv on the development of Jerusalem’s Cinema City to instead work with another company he alleged curried favor with Kahlon.Kahlon, who presided over zoning during the Cinema City deal, dismissed the lawsuit as meritless, adding that it was intended to harm his brother’s burgeoning election hopes.On Monday, Barkat issued a statement thanking Kahlon for his distinguished service to the capital.“On behalf of the residents of Jerusalem, I thank Kobe Kahlon for the seven years of great contributions to Jerusalem and the building the city,” Barkat said.Kahlon, he noted, elevated municipal standards by spearheading major reforms in “streamlining bureaucracy” for the city’s residents by expediting licensing and construction permits, among other initiatives.“Above all,” Barkat continued, “Kobe is a personal friend and has been a true partner in establishing the path we set for the return of Jerusalem to its rightful place as the capital of Israel.”“I accept his request to devote more of his time to his family after many years of service, and wish him success in his future endeavors,” he continued.Barkat added that Kahlon’s duties will be transferred “in an orderly fashion” when he steps down in November, in accordance with coalition agreements. According to multiple reports, he will be succeeded by Deputy Mayor Meir Turgeman