Only five of 16 judges sworn in are women. 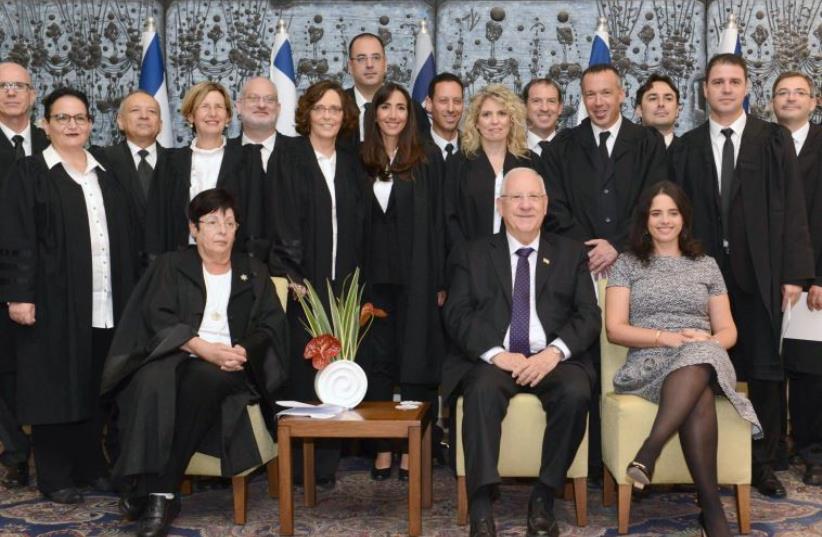 PRESIDENT REUVEN RIVLIN, flanked by Supreme Court President Miriam Naor (left) and Justice Minister Ayelet shaked, pose Thursday with 16 newly appointed judges at their swearing-in ceremony at the President’s Residence
(photo credit: Mark Neiman/GPO)
Advertisement
Gender balance was lacking when 16 new judges pledged to pursue justice without showing favor or accepting bribes. Only five of the 16 were women, despite the fact that the justice minister, the director-general of the Justice Ministry, and the president of the Supreme Court are all females.Israel does not have the kind of swearing-in ceremonies for judges that are common in most Western countries, but instead each judge makes a pledge taken from the Bible, without actually swearing on a Bible. The ceremony is usually held at the residence of the state president, except when the appointees include judges who have been elevated to the Supreme Court, when it is held at the Supreme Court.In his address on Thursday, President Reuven Rivlin, who is a lawyer by profession, emphasized the importance of tempering judgment with compassion, but not at the price of justice. He also urged the judges to look with clarity at the facts of a case, declaring that it is impossible to turn a killer into a victim or to blame a victim for defending himself.Supreme Court President Miriam Naor warned the new judges of the work load that awaits them, saying that each year some 750,000 files come before the courts. Despite the heavy burden, she said it is incumbent on judges to resist both internal and external pressures and to judge each case on its merits and with objectivity.Justice Minister Ayelet Shaked, who arrived late and for whom this was her first swearing-in ceremony in her present role, reminded the judges that they carry the fate of individuals in their hands.“You are the conscience of the nation, and you come to your new positions with special responsibility and a sense of mission,” she said.Alluding to the backlogs which have long been the bane of the courts, Shaked prevailed upon the judges to act quickly but fairly, so that people affected by their decisions would not have to live in suspense.