"It is thrilling to see so much interest in Yesh Atid and enthusiasm for what we stand for building among the English-speaking population," said former MK Rabbi Dov Lipman. 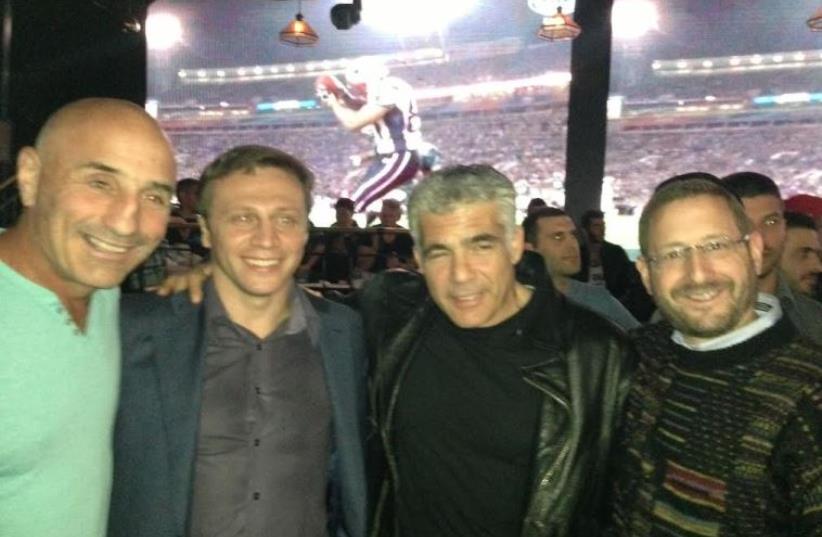 Lapid with Yesh Atid lawmakers at 2015 Super Bowl party
(photo credit: YESH ATID)
Advertisement
Yesh Atid leader Yair Lapid will host a Superbowl party with English-speaking supporters for the second year in a row early Monday February 8 in Tel Aviv.Lapid, who is a football fan, watched the entire game with English-speaking voters last year, a month before the general election. It was important to Yesh Atid to show that they reach out to English speakers even when there is no election coming up.The party has invited English speakers to host Yesh Atid MKs in their homes for small, intimate gatherings to get to know the MKs and learn more about the party and Israeli politics.  The first such event was held Tuesday night in Modiin, where 25 people came to meet MK Karin Elharar.The wheelchair-bound Elharar told her personal story, including how she overcame her disability to make it to the Knesset. She described the Yesh Atid agenda for the current Knesset and beyond and took close to an hour of questions."What really came across well is the way the party genuinely values the opinions of 'regular' people," said Yesh Atid English-speaking division Modiin representative Aron Lazarus, who hosted the event.Events are scheduled for MK Elazar Stern to discuss religion and state in Jerusalem and for MK Mickey Levy to discuss the security situation in Tel Aviv, and many more events are planned. The party has asked anyone who wants to host an event to email english@yeshatid.org.il.Michal Slawny Cababia, the director of the Yesh Atid English Division, said the English speaking population in Israel was thirsty for more information."It is thrilling to see so much interest in Yesh Atid and enthusiasm for what we stand for building among the English-speaking population," said former MK Rabbi Dov Lipman.