Lithuanian PM to Post: Vilnius one of Israel’s ‘strongest partners’ in EU

Butkevicius says ‘no equation’ between Holocaust and Soviet-era crimes and repression. 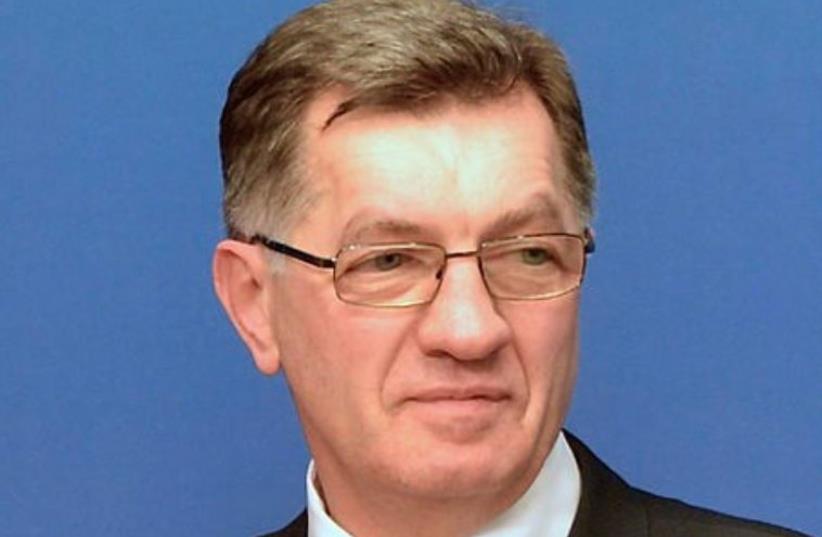 Algirdas Butkevičius
(photo credit: FRANKIE FOUGANTHIN/WIKIMEDIA COMMONS)
Advertisement
Lithuania has been, and remains, Israel’s “voice” in the international arena, the Baltic state’s prime minister, Algirdas Butkevicius, told The Jerusalem Post Wednesday on the final day of a two-day visit.Lithuania is nearing the end of its two-year stint on the UN Security Council, and Butkevicius said that during this period, the “security of Israel” was one of Vilnius’s main priorities.Lithuania supported Israel on a number of key votes in the Security Council and the UN over the past year, including abstaining – rather than voting for the Palestinians, as did fellow EU states France and Luxembourg – when the Palestinian Authority failed to gain the support of nine states needed to pass a Security Council resolution dictating a full Israeli withdrawal to the pre-1967 lines.Lithuania, the prime minister said, is “without doubt one of the strongest partners of your country in the region [the EU].”Butkevicius was non-committal when asked whether Lithuania would support the latest Palestinian move at the UN – to hoist its flag among those of other member states, something Israel strongly opposes.He added, however, that his country “always calls on Palestine to constructively use its status in international organizations and abstain from unilateral actions.”Butkevicius said this was a message he took to Ramallah earlier this week when he met with PA President Mahmoud Abbas.Another message he relayed in Ramallah was that the EU and its member states were “ready to recognize a Palestinian state when appropriate.”Asked whether he felt the EU treated Israel fairly, he said the two “have been, and remain, strong partners, and cooperation is very active and mutually beneficial in many areas.”The Lithuanian prime minister, who was hosted Monday night at a dinner given by the World Jewish Congress’s Israel Council on Foreign Relations, said he did not share the perception by many in Israel that the EU employs a double standard when it comes to the Jewish state, saying relations between the Europeans and Israel were “very good and getting better and stronger.”Addressing the refugee crisis sweeping across Europe, Butkevicius said that during his meetings a day earlier with Prime Minister Benjamin Netanyahu and President Reuven Rivlin, he asked Israel to share its experience on the issue.“We are ready to help those who need help and who flee persecution,” Butkevicius said.“At the same time, we need to send the message that we are not going to tolerate illegal economic migration.”It was “very important to strengthen the EU’s external borders, both offshore and onshore, and their protection against criminal groups engaged in the trade of humans and illegal transportation of people,” he said.Nevertheless, he said he was in favor of preserving the EU’s open-border regime, since “free movement is not only one of the most famous success stories of the EU, but also the fundamental value entrenched in international treaties.” He added that Lithuania had announced it would take in 325 refugees, and that the government would discuss the possibility of taking in more.Butkevicius, who asked that the questions be submitted in advance, replied to a query about how Israel could improve its standing in the EU, calling on the Jewish state to “resume the dialogue and negotiations regarding peace with the Palestinians, and abstain from unilateral actions.”He went on to dismiss charges that his government was being insensitive by going ahead and building a convention venue in the center of Vilnius to replace a Soviet-era sports complex that had been built over an old and storied Jewish cemetery.“Let me reassure you that the history of Lithuanian Jews and [their] memorials are very important to the Lithuanian people and the Lithuanian government, and the government adopted a special program to make sure that all cemeteries in all municipalities in Lithuania will be memorialized and marked by 2017,” he said.Despite objections from organizations representing Lithuanian Jews around the world and instead relying on the approval of the tiny local Jewish community and a London-based hassidic organization called the Committee for the Preservation of Jewish Cemeteries in Europe, the premier said his government was indeed discussing the matter with Jewish communities that are interested in the matter, as well as with the local Jewish community.“Without the consent and approval from these communities, we would not come up with any plans,” he stated, adding that his government was planning to “install a memorial” for the cemetery at the site.Likewise, Butkevicius rejected claims that his country was diminishing the significance of the Holocaust by promoting a narrative equating it with Soviet- era repression and crimes.He said his country “places a great focus on the memory of the Holocaust,” on Holocaust education, the promotion of tolerance and “eradicating the manifestation of anti-Semitism” there.“There is no equation between these two types of crimes,” he said, referring to the Holocaust and Soviet brutality.As to why not a single Lithuanian war criminal from the Holocaust era had been sent to prison since the country gained its independence in 1990, the premier said Lithuania was “ruled by law, and justice is administered by the courts.”“All cases are investigated,” he said. “If there is information gathered, it is submitted to our prosecution that investigates all cases and refers them to the courts. Lithuania is ready to cooperate, and once it receives any factual information, it will be used to restore justice to humanity.”Butkevicius added that the country was “working with our young people and trying to raise their awareness about the past” and mistakes that had been made.“We focus on tolerance and respect,” he said “And people have condemned the guilty ones a long time ago.”