Leading Israeli analysts are not optimistic that the cease-fire will hold over the long run or lead to a peaceful political settlement of the war. 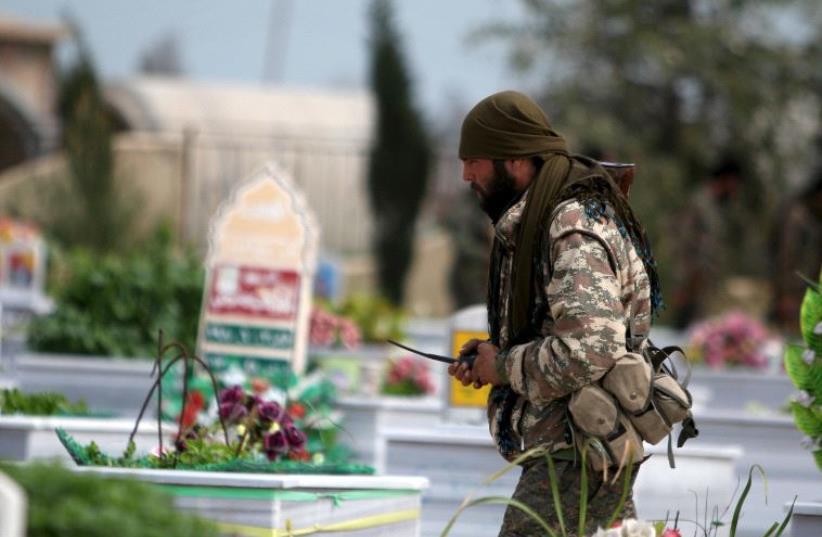 A Kurdish People's Protection Units (YPG) fighter walks near graves of fellow fighters during a visit to a YPG graveyard in Qamishli, Syria
(photo credit: RODI SAID / REUTERS)
Advertisement
If all goes well, a cease-fire due to go into effect Monday evening will bring a degree of de-escalation and at least a temporary respite in the Syrian civil war, a conflict now in its sixth year that has taken the lives of over 400,000 people, according to UN estimates.The cease-fire agreement, announced Saturday by Secretary of State John Kerry and Foreign Minister Sergei Lavrov, is premised on Washington and Moscow reining in their allies – Syrian opposition groups and regime forces, respectively – in order to stem the hostilities. Once violence declines and humanitarian relief is made available over a seven-day period, the US and Russia are to begin coordinating operations against Islamic State and the al-Qaida linked Jabhat Fatah al-Sham, formerly known as Jabhat al-Nusra.Leading Israeli analysts are not optimistic that the cease-fire will hold over the long run or lead to a peaceful political settlement of the war. Benedetta Berti, a researcher at the Institute for National Security Studies, tells The Jerusalem Post there may be a short-term calming due to a desire by the regime to focus on consolidating gains it has already made and exhaustion among the ranks of the opposition.But, she stressed, it is unlikely the cease-fire will prove durable. “To convert it into a long-term political process there are many missing links,’’ she said.Foremost among these are that the US and Russia still diverge over what a peaceful settlement should look like, with the Russians wanting to keep Syrian President Bashar Assad in power in an agreement, and the US, and certainly its allied opposition groups, are seen as still wanting his removal. The cease-fire agreement doesn’t deal at all with what will happen to the Assad regime.In recent months, the regime has considerably improved its military position. Rebel-held parts of Aleppo, Syria’s largest city, are under full siege and two Damascus suburbs have been taken out of rebel control through agreements due to Syrian Army pressure. The regime’s improved prospects also augur poorly for the long-term health of the cease-fire since Assad may be convinced he can win the war by continuing the fight. “It’s a question of motivation,” says Tel Aviv University Syria specialist Eyal Zisser.“He is winning, so why give up?” Zisser adds: “The Russians have no real interest in a cease-fire and bringing the war to an end according to the American plans. And the Americans are not ready to do anything. If Bashar violates the cease-fire agreement will they do anything to him? Clearly not.”Zisser believes the new cease-fire will go the way a February cease-fire based on US-Russian understandings went: dissolved amid continued regime strikes on rebel targets and civilians.Pessimism among Syrian rebels about the cease-fire’s prospects increased only hours after it was announced Saturday when Syrian or Russian aircraft bombed a market in Idlib, killing dozens of civilians, including many women and children.US aversion to becoming embroiled in the Syrian conflict means that Washington may lack the leverage to stop regime violations and will be completely dependent on the goodwill of the Russians to do so. “It’s not clear to me that the Russians are interested in Assad stopping his offensive operations which they’ve been supporting so strongly,” Berti says.While the Russians may lack the desire to stop Assad, the US may be simply unable to entirely hold up its own part of the bargain, she adds.The agreement calls for US pressure on the opposition groups it supports to separate from the powerful Jabhat Fatah al-Sham and envisions US-Russian cooperation in attacking that al-Qaida-linked group. But in fact the US-backed opposition fighters enjoy close relations with JFS that may prove impossible to break.According to Charles Lister, a fellow at the Washington-based Middle East Institute, who was quoted by AP, the mainstream, US-backed opposition forces are “coupled” with JFS on the front lines in southern, central and northwest Syria. JFS spearheaded fighting against Assad’s forces in northern Syria over the past year.Berti believes the US and Russia will likely clash over the question of how to attack Jabhat Fatah al-Sham, with the US in the past calibrating its attacks to take into account the presence of other opposition groups and civilians, factors the Russians will likely be less inclined to consider. “The US and Russia disagree which rebel groups should be classified as terrorist and which shouldn’t, for the Russians the list is broader,’’ she says.In Zisser’s view, no diplomatic resolution of the war is possible, because it is a zero-sum game. “Assad wants to stay in power, the rebels want to kick him out. How can you bridge such a gap?” he says. “It will be decided on the battlefield.”“I don’t see any change. We will be left with this disastrous humanitarian situation for a couple of years,” he says.Not all analysts are so pessimistic.Patrick Cockburn, author of The Rise of Islamic State: ISIS and the New Sunni Revolution, wrote Saturday from Damascus on The Independent (a UK website) that the agreement has a good chance of sticking. The US and Russia, he wrote, “should be in a position to persuade or compel their allies and proxies to abide by a truce, however reluctant they may be.“Neither side can easily afford the failure of their gargantuan diplomatic effort for peace in Syria. If the peace initiative does collapse, as happened with a less detailed effort in February, then the international authority of both countries will be diminished rather than enhanced as it will be if they end the war.”