Meretz to hold first ever primary elections for party leadership

The party leadership race will be held on Thursday. 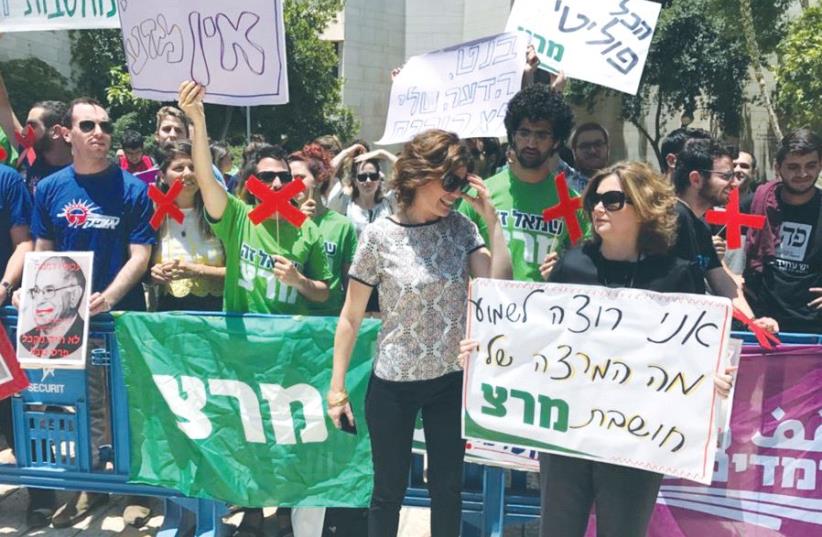 ‘I WANT to hear what my lecturer thinks’ and ‘Everything’s political’ read signs held by Meretz supporters at the Hebrew University of Jerusalem yesterday
(photo credit: Courtesy)
Advertisement
Meretz will hold its first-ever leadership race that will be decided by a primary of its members on Thursday.While there were initially nine candidates, incumbent Zehava Gal-On and four others dropped out, leaving MK Tamar Zandberg, former Peace Now secretary-general Avi Buskila, and activists Ophir Paz and David Kashani.At her concluding campaign rally in Tel Aviv on Tuesday night, Zandberg said that if she wins, “Meretz will no longer be a fringe party or remain in a bubble that is disconnected from the rest of the country.”Buskila said he would “lead Meretz back into the hearts of the public, and have the party join socioeconomic struggles in every corner of the country.”The 31,680 members will be eligible to vote in 130 polling stations nationwide that will be open from noon to 10 p.m.Results are expected by 10:30 p.m. because the voting is computerized, and the winner will then deliver a victory speech at the Tel Aviv Fairgrounds.