“If Labor wants to be a ruling party again, it must receive votes of immigrants. But they are focused on their own internal problems, as if there are aren’t other problems in the country.” 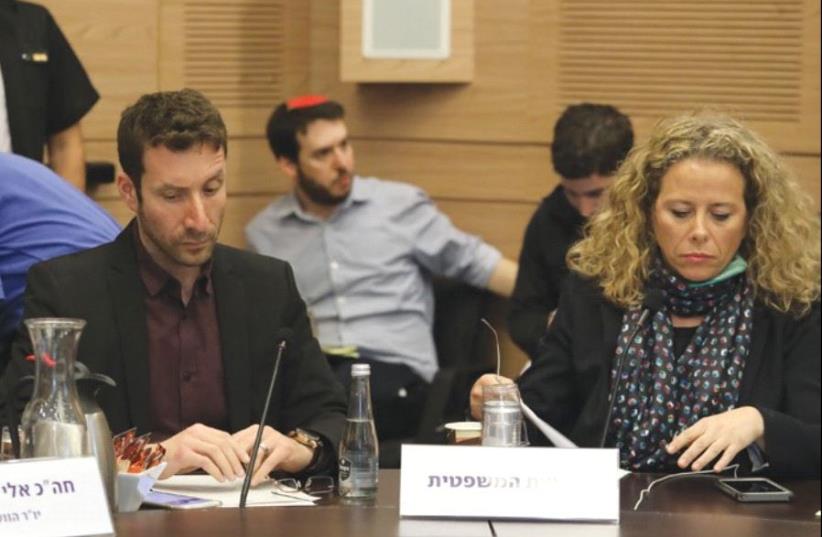 FROM LEFT: MKs Eli Alalouf, Itzik Shmuli and Ayelet Nahmias- Verbin discuss the dispute between the doctors and the Hadassah Medical Organization during an emergency session of the Knesset committee.. (Yitzhak Harari/Knesset)
(photo credit: YITZHAK HARARI)
Advertisement
When it rains, it pours in the Zionist Union.First, MK Ayelet Nahmias- Verbin complained Wednesday about alleged sexual harassment by her party colleague Eitan Broshi on a visit to the Gaza periphery.The same day, popular Zionist Union MK Isaac Herzog had a going-away party ahead of his departure from the Knesset for the Jewish Agency. He will be replaced in the Knesset at the end of the month by the next name on the Zionist Union list, former MK Robert Tiviaev, who has said he currently would not vote for the party.Then Thursday, MK Leah Fadida filed a complaint with the Knesset Ethics Committee against her Zionist Union colleague Miki Rosenthal. She said that in last Monday’s faction meeting, he screamed at her for saying she wanted to vote for a bill that would prevent organizations that campaign against the IDF from entering schools.Fadida wrote in the complaint that after the meeting, she asked for him to apologize, and he responded by approaching her “in a violent and humiliating way” and she felt threatened by him.“My colleagues had to grab him and distance him from me,” she wrote. “It got to the point that MK Itzik Shmuli had to protect me with his body.”Fadida said Rosenthal had acted in a similar way to her and others in the past. She wrote that someone like him does not belong in the Knesset.Rosenthal responded by accusing Fadida of exaggerating and saying she was wrong to ask to support legislation that he called “fascist.”Party activists have called for both Broshi and Rosenthal to step down, but neither intend to so. If they did, the next names on the Zionist Union list after Tiviaev are former MK Moshe Mizrachi and leftwing activist Eldad Yaniv.Yaniv has led anti-corruption protests against Prime Minister Benjamin Netanyahu for a year and a half.After the first meeting between Tiviaev and Zionist Union leader Avi Gabbay ended with a press release saying Gabbay had scolded Tiviaev for his comments against the party, the two men met again recently and had a better meeting. They discussed the party and how it will handle problems faced by immigrants, but Tiviaev remains unconvinced.“If the Zionist Union changes direction and helps immigrants, as Herzog invited me to the party to do,” my views on the party could change,” Tiviaev told The Jerusalem Post on Friday. “If Labor wants to be a ruling party again, it must receive votes of immigrants. But they are focused on their own internal problems, as if there are aren’t other problems in the country.”