"The threat of expulsion will serve as a silencing tactic, while also impeding MKs’ ability to faithfully fulfill the mandate they promised to their voters.” 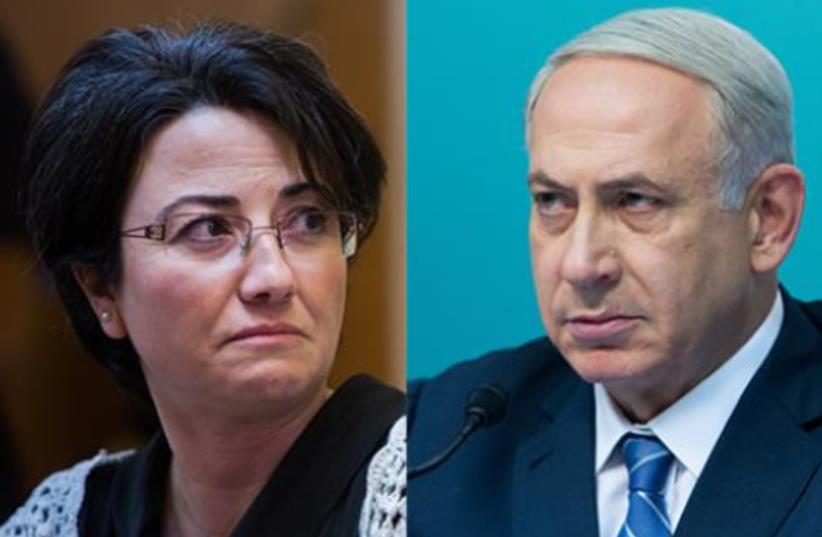 MK Haneen Zoabi and PM Benjamin Netanyahu
(photo credit: screenshot)
Advertisement
The Knesset has passed a much-disputed law allowing legislators to impeach errant colleagues in a final vote overnight Tuesday.The bill, spearheaded by Prime Minister Benjamin Netanyahu and adopted by Knesset Constitution, Law and Justice Committee chairman Nissan Slomiansky (Bayit Yehudi), allows MKs to vote to dismiss a fellow lawmaker for incitement to violence or racism, and support for armed conflict against Israel, which are among the reasons cited in the Basic Law: Knesset for banning a party or person from running.The impeachment process would begin with 70 MKs, 10 of whom must be from the opposition, petitioning the Knesset House Committee, and could only be finalized with a vote of 90 MKs in favor of the dismissal. If an MK is expelled, he or she would be replaced by the next person on his or her party’s list.Previously, MKs could only be removed from the Knesset if they were convicted of committing a crime with moral turpitude.Netanyahu suggested that a bill to impeach lawmakers be passed after MKs Jamal Zahalka, Haneen Zoabi and Basel Ghattas from Balad met with the families of terrorists in February. The MKs stood in a moment of silence in memory of “Palestinian martyrs,” and the Balad Facebook page referred to the father of a terrorist who killed three Israelis as the father of a “martyr.”However, the law will not apply retroactively to actions MKs took before it passed.MK Michael Oren (Kulanu) supported the bill, but said it doesn’t go far enough and is not democratic enough in that it requires a 90-MK majority.Oren cited the US Constitution, which states a member of Congress can be expelled “for disorderly behavior” with a two-thirds majority vote.That clause has been used 20 times, most of which were during the 1861-1865 American Civil War to remove sympathizers with the South.“The biggest question in my mind is the criteria... I would have preferred the American locution of behavior unbecoming of a member of Congress,” Oren said. “Everyone screamed bloody murder over Zoabi, when she called Israelis murderers, but under this law, nothing can happen. All they can do is scream.”An example to which Oren said he thinks the law should apply, but in its current version does not, is when, in April, Joint List chairman MK Ayman Odeh sent a letter via the Palestinian delegation to the UN calling on UN Secretary-General Ban Ki-moon to send a fact-finding mission to Israel to investigate its treatment of its Arab minority and land disputes in the Negev.“He [Odeh] circumvented the Foreign Ministry and asked for an investigation against his own state, and he did it through the Palestinian delegation to the UN. In my mind, that’s double treason. But that activity wouldn’t be actionable under the criteria now established,” Oren stated. “If you’re going to have a law, put teeth into it.”At the same time, Oren said the law as it is could be a deterrent, because “people don’t like losing their jobs.”“It’s sad that we reached this point, because I think these issues should have been taken care of by the legal system. I don’t understand how Zoabi could [in 2010] join the IHH, which is recognized as a terrorist organization by the State of Israel, on a flotilla [Mavi Marmara] aimed at helping Hamas, in violation of the Israeli maritime blockade and walk off scot-free. I don’t get that. I don’t get how MKs can express support for terror. That’s a real problem,” he stated. “It would be better if the Knesset didn’t have to fill this vacuum.”MK Yousef Jabareen called the bill the “tyranny of the majority,” arguing that it was drafted to target Arab lawmakers.Jabareen sent letters detailing his grievances about the bill to the UN special rapporteur on minority rights in Geneva and the ambassador of the EU in Israel: “The coalition has tabled legislation that would enable the impeachment of duly elected representatives of the Arab Palestinian public... Israel has veered far from acceptable norms of democratic discourse and practice.According to Jabareen, the bill seeks “to dispose of Arab MKs in order to silence them and the views they find intolerable,” which “invalidates tens of thousands of legitimately cast votes.”“If this proposal passes, it will make the right to be elected conditional on ‘good behavior,’” he added. “Furthermore, the threat of expulsion will serve as a silencing tactic, while also impeding MKs’ ability to faithfully fulfill the mandate they promised to their voters.”In committee discussions of the bill, Odeh said that the entire Joint List will resign from the Knesset if the law passes.