A government representative admits "the government decided to evacuate, but did not decide how to rehabilitate" and most of the planning was for the short term. 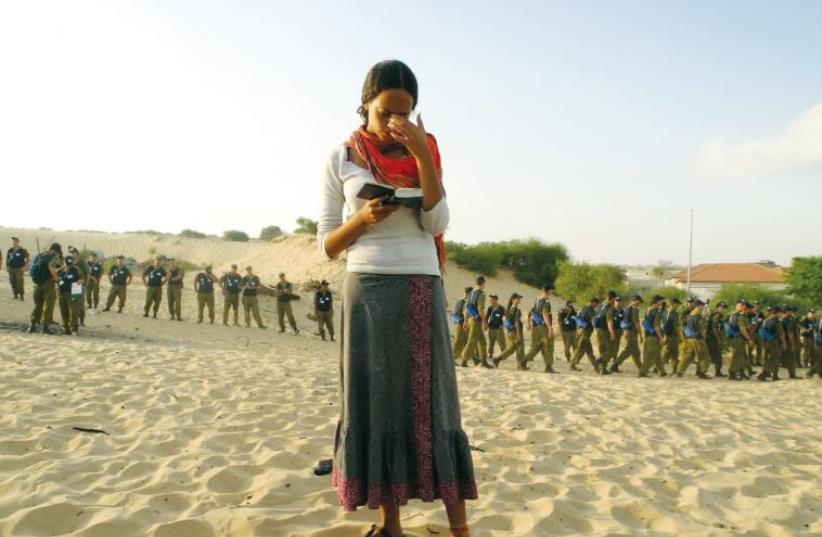 A woman prays during the evacuation of Gush Katif in 2005.
(photo credit: ILLUSTRATIVE/RONEN ZVULUN/REUTERS)
Advertisement
The government’s treatment of evacuees from Gaza and Northern Samaria is shameful, Knesset Committee on Transparency chairwoman Stav Shaffir (Zionist Union) said in a meeting on the topic Monday, pointing out that 400 families evacuated in the 2005 disengagement still have yet to be moved to permanent homes and 180 requests for damages are still stuck in court.The cumulative budget of Tnufa, the government office responsible for taking care of the evacuees has reached NIS 13 billion, or about NIS 7.5 million per family, Shaffir said, but the results do not match the spending.“The government has behaved shamefully for a decade. The moment the government decided to evacuate people from their homes, it took on the responsibility to make sure they have a roof over their heads,” she stated.Shaffir said evacuees met an “opaque wall” hiding information about their rights, and instead had to meet with many politicians and bureaucrats in order to get help.“For 10 and-and-a-half years, things have been delayed, families continue spending money on temporary solutions and [Tnufa] underwent different incarnations, but it did not include serious planning, did not set goals, examine or prepare reports,” she said.The Zionist Union MK said she has “seen such behavior in the public sector time and again, but when it comes to such a sensitive topic, one has to wonder if it is intentional.”Avi Farhan representing the Elei-Yam community, also was removed from Yamit, in Sinai, which was evacuated in connection with the peace treaty with Egypt.Farhan said that then-prime minister Menachem Begin knew how to treat evacuees “fairly and with integrity,” but that the Ariel Sharon government ignored his community’s requests.“Most of the money went to lawyers and building temporary sites,” he explained. “Bureaucrats who were supposed to help the community almost never came out to the field.”“The government was efficient in uprooting us, but a third of us are still refugees in our own land,” Farhan stated.Yossi Dayan, another former Gush Katif resident, said most of the money doesn’t actually reach the evacuees.“They didn’t invest the money in developing industry, and people who lost their livelihood could not pay for their new houses,” he recounted.Amalia Avinoam, another representative of the evacuees, said the money they got 10 years ago is not enough to build a house today, and anyone who can’t afford a lawyer was “erased” in the authorities’ eyes.MK Shuli Moalem-Refaeli (Bayit Yehudi) said that “after 10 years, no one thought we would still be talking about families without houses.”Moalem-Refaeli said she has heard the issue spoken about in other committees in the past, and that people say they want to help but no one has solutions.“Beyond the NIS 13b., people, families and communities have paid a huge psychological price,” she stated.Tnufa representative Yisrael Malachi pointed out that 90 percent of the evacuees had found a solution, noting that in Yamit, 70 families who lived in the area for seven to eight years were evacuated, while in Gush Katif and Northern Samaria, 1,600 families were evacuated after 30 years of an Israeli presence.“One of the reasons for the 1985 economic crisis was paying damages to Yamit residents and the government has a national responsibility for the economy,” he said.Still, Malachi admitted that “the government decided to evacuated, but did not decide how to rehabilitate” and most of the planning was for the short term.“All families received the full damages, but the failure is that they did not receive the funds and the permanent homes at the same time,” he said.