PM recommends to his critics who have slammed him for harming Israel-US ties to show a little “humility.” 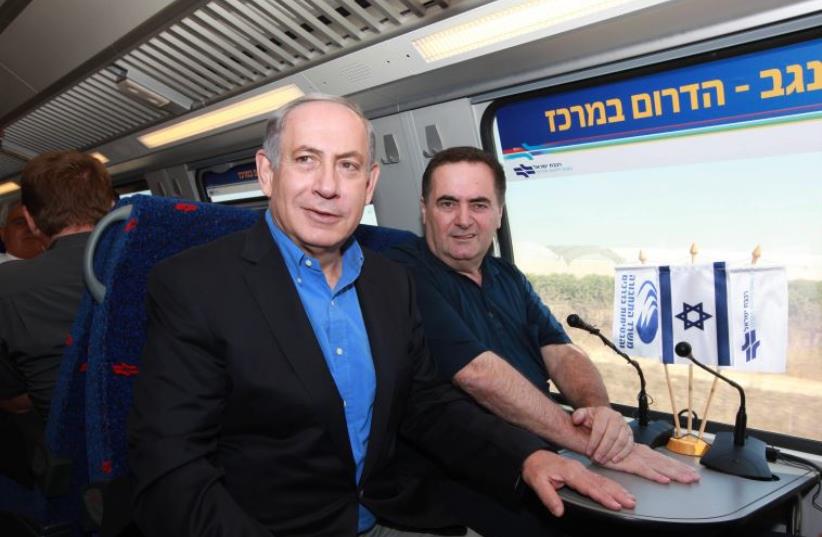 Prime Minister Benjamin Netanyahu and Transportation Minister Yisrael Katz ride an Israel Railways train
(photo credit: ELIYAHU HERSHKOVITZ/POOL)
Advertisement
Not only did the bruising battle with US President Barack Obama over the Iran nuclear deal not harm Israel’s ties with the US, but it in fact served Israel’s interests, as even supporters of the deal now understand the need to combat Iranian regional aggression and strengthen Israel, Prime Minister Benjamin Netanyahu said on Thursday.Netanyahu said this was made clear during a phone conversation he held Wednesday night with Secretary of State John Kerry, as well as in recent comments made by Obama.Netanyahu’s remarks came as he was inaugurating a new train line from Ashkelon to Beersheba.It is clear that there was no deterioration in ties with the US as a result of the high-profile disagreement, Netanyahu said, adding that “there cannot be a deterioration” in those ties.Netanyahu recommended to his critics who have slammed him for harming Israel-US ties to show a little “humility.”“I think I know how to navigate Israel’s relations, how to defend our state, and we are defending it, both against outside challenges and on the borders,” he said.“I have heard all kinds of experts and pundits explain for months that the struggle we have led against the Iranian deal can cause a break, collapse in relations with the US,” he said. “I never understood why the sovereign State of Israel, which represents the Jewish people, cannot lead a campaign against a nuclear deal with a country that declares its intention to destroy us.“It is my obligation to point out the dangers,” he said. “Not only does this not harm Israel, it serves Israel’s interests.”Netanyahu is scheduled to meet Kerry on the sidelines of the UN General Assembly in New York later this month, and meet with Obama in Washington on November 9.Officials in the Prime Minister’s Office have for days been pointing out that since the accord made its way through Congress, leading Democratic supporters of the deal, such as presidential candidate Hillary Clinton and Vice President Joe Biden, have since stressed the importance now of strongly supporting Israel.One Israeli source said Netanyahu and Obama will discuss “life after” the Iran deal.The source said Obama has said repeatedly over the last few weeks that Israel and the US could “have the conversation” about Israel’s new security requirements as a result of the deal either “before or after” the debate in Congress runs its course.“We said not before,” the source said. “But we will have the conversation. It is interesting that you see that even among those who supported the deal that there is unanimity regarding the need to strengthen Israel.”One topic that is expected to be discussed when Netanyahu meets Kerry at the UN General Assembly is the volatile situation on the Temple Mount, an issue that is receiving extensive coverage in the Muslim world, with Turkish President Recep Tayyip Erdogan condemning Israel’s actions and, in an Arabic tweet he posted on Thursday, pledging to stand besides his “Palestinian brothers” to protect al-Aksa Mosque.Erdogan met earlier this week in Turkey with Khaled Mashaal, the leader of Hamas, who has played a role in fanning the passions over the Temple Mount in recent days.In a sign of what the Turkish public is hearing about the situation in Jerusalem, Turkey’s Daily Sabah newspaper on Thursday reported that “Dozens of Israeli forces on Tuesday forced their way into the flashpoint site for the third day in a row and attacked Muslim worshipers.”According to the report, “Tensions have been running high at the Al-Aqsa Mosque complex after Jewish extremists called on followers to storm the mosque during Rosh Hashanah, the Jewish New Year. For Muslims, Al-Aqsa represents the world’s third holiest site.Jews, for their part, refer to the area as the Temple Mount, claiming it was the site of two Jewish temples in ancient times.”On Monday, Jordan’s King Abdullah also slammed Israel for the situation on the Temple Mount, but there is an open line of communication between Jerusalem and Amman, and Netanyahu stressed in messages to Jordan – as he has done in the past – that he has no intention of changing the status quo at the site.But part of the status quo, Netanyahu has made clear, is that Jewish visitors are allowed to go to the Temple Mount unmolested. Jerusalem’s message to Abdullah and others is that the Palestinian rioters are the ones trying to change the status quo and intimidate people, including non-Jewish tourists, to prevent them from visiting the location.Netanyahu spoke about the matter Thursday evening with UN Secretary-General Ban Ki-moon and said Israel is acting against Palestinian violence and incitement on the Temple Mount, and stressed Israel’s commitment to preserving the status quo.The prime minister, according to his office, also stressed to Ban that Israel would act strongly against rock and firebomb throwers, such as those who caused the death earlier this week of Alexander Levlovitz.Netanyahu, during his launching of the train line in the South, reiterated again that the country’s policy toward rock-throwers and firebombers would become much tougher, including changing open-fire orders, heavier prison sentences mandated by legislation, and “massive fines against underage youths, against them and their families, including the forfeiture of assets.”All this, he said, is needed to “create a new deterrence.In the State of Israel, people do not throw firebombs, or shoot at trains, or throw stones at will. Those who do so will pay a very heavy price.This is a change of policy.”