Netanyahu 'buying his way to power, making a mockery of parliament,' Lapid says

Yesh Atid founder said that Netanyahu’s gambit to add ministerial positions in order to accommodate his coalition partners amounts to “a betrayal of the public’s trust.” 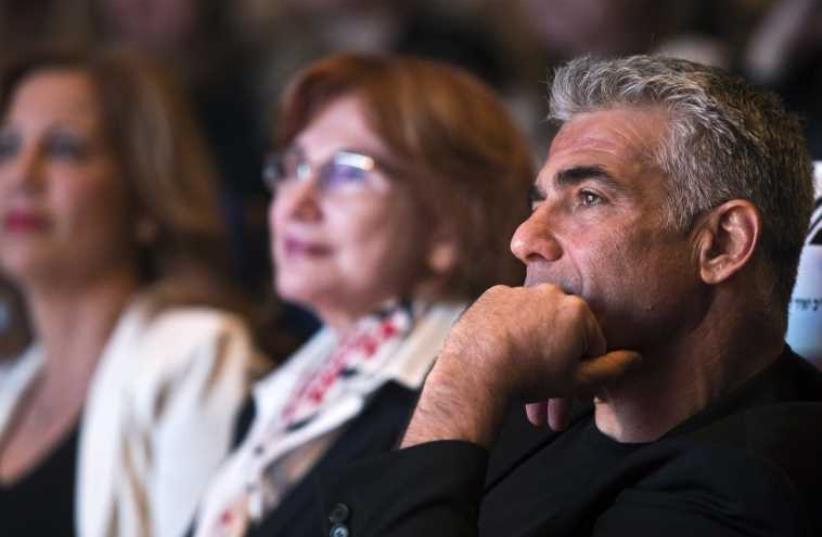 Yesh Atid leader Yair Lapid attends a women's committee convention in Tel Aviv
(photo credit: REUTERS)
Advertisement
Yesh Atid leader Yair Lapid accused Prime Minister Benjamin Netanyahu on Monday of “buying” his way to a fourth administration while “making a mockery of the Knesset.”Lapid, who was dismissed by Netanyahu from the finance minister’s position, triggering early elections and paving the way for Yesh Atid to be relegated to the opposition, spoke just hours after the High Court of Justice rejected his petition to prevent the Likud from expanding the size of the government.“Nobody denies the fact that Benjamin Netanyahu received the public’s trust and won the election,” Lapid told a meeting of his faction in the Knesset. “But he wasn’t elected to be the prime minister exclusively of his associates, or the prime minister of sectarian parties that help him buy power with money, or a prime minister who makes a mockery of the Knesset, and makes a mockery of the democratic process.”Lapid said that Netanyahu’s gambit to add ministerial positions in order to accommodate his coalition partners amounts to “a betrayal of the public’s trust.”“A year ago, I sat in front of him when he voted in favor of limiting the government to 18 ministers,” he said. “[The prime minister] said that he believed in it. He said it was the right thing for the State of Israel. He voted in favor of it with us on all three readings. A year has passed, and he has shed his skin.”The High Court of Justice on Monday rejected Yesh Atid's petition to freeze the transitional government's attempt to suspend the Basic Law limiting the number of government ministers to 18 ministers, with the punchline being that the new government will likely be able to increase the number of ministers to 20 by passing a change to the law.Though technically the decision was an interim decision and the court could still strike down changes to the law in its final decision,  the short and rapidly decided decision by Justice Daphna Barak-Erez implied that she saw little possibility of the court intervening in a more clearly legislative matter.The decision could put a stake in the heart of Yesh Atid's attempt to salvage one of the major reforms it pushed through the last Knesset in limiting the number of ministers.It also appeared to adopt the state's opinion that regardless of the background and motivations, how many ministers a given government should have was firmly more of a Knesset decision than a court decision.Yesh Atid faction chairman Ofer Shelah asked the High Court of Justice Sunday for an injunction to delay the expansion of the cabinet until the government follows proper procedure. The Court asked the state to respond by Monday at 8 a.m.