Netanyahu meets US representative who skipped his Iran address to Congress

While the speech in Congress did come up during the meeting, the main focus was on the Iranian nuclear negotiations. Netanyahu is continuing to be outspoken in his opposition to the Iran deal. 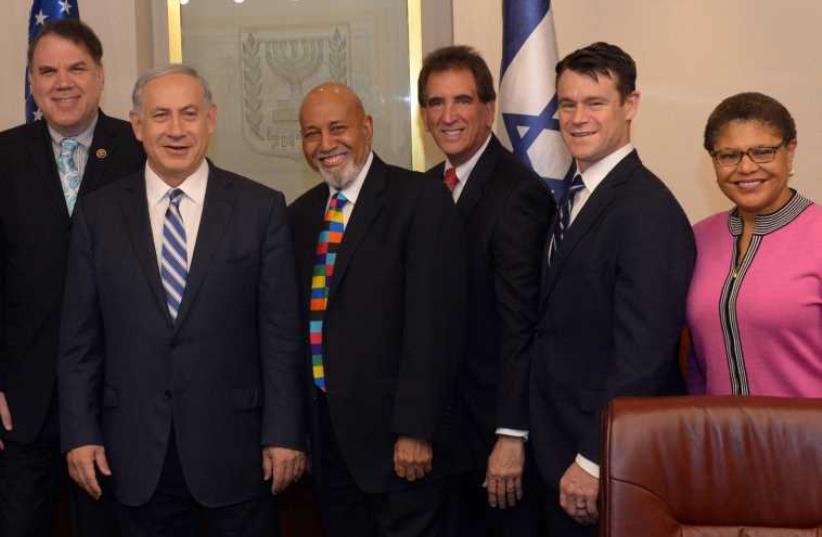 Prime Minister Benjamin Netanyahu meets with a bipartisan US Congressional delegation
(photo credit: HAIM ZACH/GPO)
Advertisement
Prime Minister Benjamin Netanyahu met with a six-member bipartisan US Congressional delegation on Monday, including Rep. Karen Bass (D-California) who was among 58 members of Congress who skipped his controversial speech to Congress in March.One government official said that while the speech in Congress did come up during the meeting, the main focus was on the Iranian nuclear negotiations. Netanyahu is continuing to be outspoken in his opposition to the Iran deal.Explaining her decision to skip the Netanyahu address, Bass issued a statement prior to the March address saying that she is a strong supporter of the US Israeli relationship, and wants it to remain a bipartisan issue.“Unfortunately,” she added, “[House] Speaker John Boehner mishandled inviting Israel's Prime Minister Benjamin Netanyahu to speak to Congress. Prime Minister Netanyahu’s speech is now marred with controversy.  Prime Minister Netanyahu has been provided with other options to talk with members of Congress, but he has turned them down to do the public speech. It is truly sad that Speaker Boehner and Prime Minister Netanyahu have chosen to play partisan and divisive politics.”Netanyahu, at the start of the meeting, stressed the bi-partisan nature of the relationship, and said it is based on “two pillars, Democrats and Republicans alike.” Even when there are disagreements, he said, “they are based on our common need, desire to maintain our alliance and to maintain Israel's security.”In addition to Bass, the delegation included another member of the Congressional Black Caucus – Alcee Hastings (D-Florida) who is heading the delegation. While many members of the caucus were very critical of Netanyahu for the speech to Congress, Hastings – making his 16th trip to Israel – was not one of them.“The ultimate question that I’ve been asked is: What will it [the speech] do to black-Jewish relations?” Hastings told the Forward in February. “Nothing. It will do absolutely nothing.”Hastings rejected the idea that Netanyahu had forced him to choose between Israel and an African-American president.“It almost offends me that that thought is present,” Hastings said at the time. “Bibi is using this as a political tool, and you know, I do things political, and last time I looked so does everyone else in politics.”The four other members of the delegation were Alan Grayson (D-Florida), Steve Stivers (R-Ohio), Jim Renacci (R-Ohio), and Todd Young (R-Indiana).The trip was organized by the American Israel Education Foundation, a charitable organization affiliated with the American Israel Public Affairs Committee.