Since the deal was announced eight days ago, Netanyahu has spoken out against it every single day – often more than once a day. 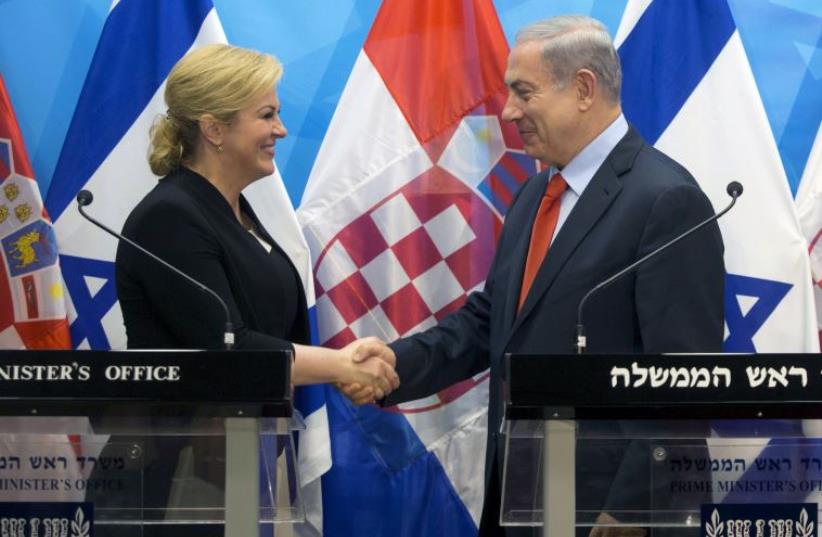 Prime Minister Benjamin Netanyahu (R) and Croatian President Kolinda Grabar-Kitarovic
(photo credit: REUTERS)
Advertisement
The nuclear deal with Iran makes another Middle East war more likely, Prime Minister Benjamin Netanyahu said on Wednesday.“Now we’re told that the only alternative to this bad deal is war,” Netanyahu said during a photo opportunity with visiting Croatian President Kolinda Grabar-Kitarovic.“But the very opposite is true. By strengthening the terrorist state of Iran, this deal makes war not less likely, but more likely.”The agreement reached with Iran last week “doesn’t prevent war; it will make war – even nuclear war – more likely,” the prime minister said.Netanyahu’s remarks were at direct odds with comments US President Barack Obama made on Tuesday. Speaking at the Veterans of Foreign Wars national convention in Pittsburgh, Pennsylvania, Obama said that with the accord, “we have a chance to resolve the challenge of Iran trying to get a nuclear weapon, peacefully.Without it, we risk yet another conflict in the Middle East.”Netanyahu said that the very expectation among Arab states that Iran will become a military nuclear power “will be enough in itself to spark a nuclear arms race in the Middle East, the most volatile region on earth.”Second, the hundreds of billions of dollars that Iran stands to gain from sanctions relief will go to grease its “terror machine and its war-making machine.“That’s more Iranian aggression in Iraq, in Syria, in Lebanon, in Libya, in Yemen and elsewhere. That’s more Iranian ballistic missiles, that’s more terrorism from the Revolutionary Guard, Hezbollah, Hamas and the Islamic Jihad,” he said.“The real alternative to this agreement is not war,” the prime minister said, referring to arguments made by Obama and his administration, but rather “a better deal that would tie the lifting of restrictions on Iran’s nuclear program and would roll back Iran’s nuclear infrastructure. Such a deal would be tied to ending Iran’s aggression and terrorism.”Netanyahu has criticized the deal every single day since it was announced – often multiple times in the same day, as yesterday.A pattern is emerging in which the prime minister introduces a new element to his argument against the deal in addition to the points he has made previously, which he also repeats.Before meeting the Croatian president, Netanyahu referred to the Iran deal in a special Knesset session with visiting Italian Prime Minister Matteo Renzi, saying that the fire of extremist Islam in the Middle East is “spreading to Africa, Europe and Asia.”“The region in which we live is overflowing with fire and blood,” he said. “Islamic fanaticism is washing over cities and countries, bringing acts of vicious slaughter, and horrors that stand in complete contravention of the rules of basic morality.”He told the Italian premier that Iran – which strives to export its Islamic revolution – “continues, on a daily basis, to call for Israel’s destruction. It is spreading murderous terrorism and undermining stability across the Middle East. I say as clearly as possible: The nuclear agreement signed with Iran last week threatens not only us, but you in Europe, the United States and the entire international community.”Netanyahu added that when the sun sets on the nuclear agreement in a maximum of 15 years, “all the restrictions on Iran’s production of advanced and nonadvanced centrifuges will be lifted, as well as on its enrichment of uranium to any level it likes.Then Iran will be able to break through to many nuclear bombs in zero time, with international legitimacy.”In a speech at the Yad Vashem Holocaust Museum in Jerusalem, Grabar-Kitarovic said that despite the slogan of “never again,” genocide has happened again and that we see it happening around us.“We must never tire of explaining the lessons of history,” she said. “We all have a choice in the most difficult and darkest of circumstances and the righteous among the nations took the responsible choice.”Greer Fay Cashman contributed to this report