'Netanyahu refused to assemble the cabinet on Gaza and Iran threats' 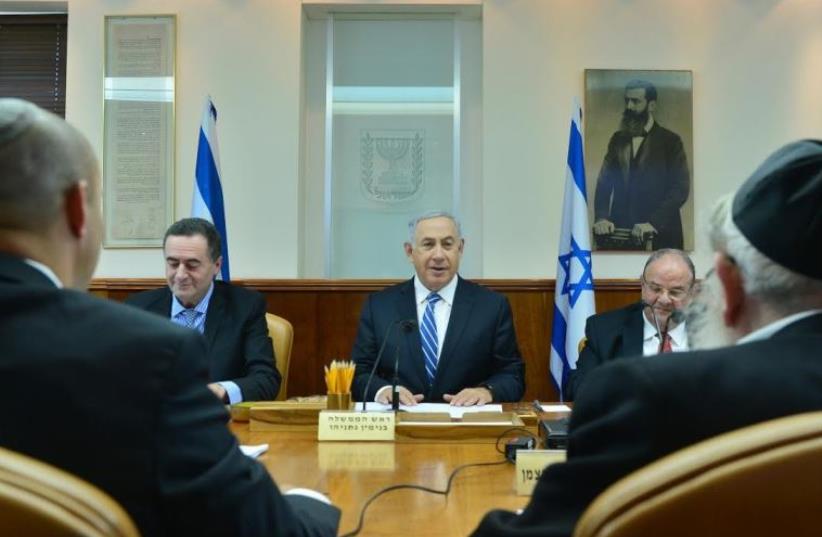 Prime Minister Benjamin Netanyahu at a meeting of cabinet ministers in Jerusalem, May 30, 2016
(photo credit: KOBI GIDON / GPO)
Advertisement
Uzi Arad, the former head of Israel's National Security Council, said Tuesday that the discussions in the cabinet about the Gaza flotilla in May 2010 were "thrown together and not serious, and therefore I refused to participate in them."Arad said that, "We requested for months to deliberate on the issue and the prime minister [Benjamin Netanyahu] refused to assemble the cabinet."Similar requests to assemble the cabinet about the threats from Gaza and Iran were also ignored, according to Arad.His remarks were made to the Knesset State Control Committee, which discussed the decision-making process during Israel's recent reconciliation with Turkey.The Committee's chairperson, Karin Elharrar (Yesh Atid), said at the hearing that "it seems that decisions at the cabinet are made by a coin toss." She added that decision's are at times made even though cabinet members do not have the "necessary information."Arad warned that the same process occurred during the handling of Israel's natural gas deal. "They said the deal was already done and all that was left to do was approve it...the discussion in the cabinet was hurried and illegal."He observed that during the 2014 Gaza incursion the cabinet did meet frequently,  but was kept out of the loop on the important issues.Itamar Ya'ar, Arad's deputy at the time of the flotilla, said at the hearing that "there is a battle between a prime minister, who believes he is in charge, and what the formal law states. The law itself states that decisions are made by the cabinet, in which each member hears the information and offers his opinion before the collective decisions are made."