Ethiopian PM will meet in Jerusalem with Netanyahu soon after summit. 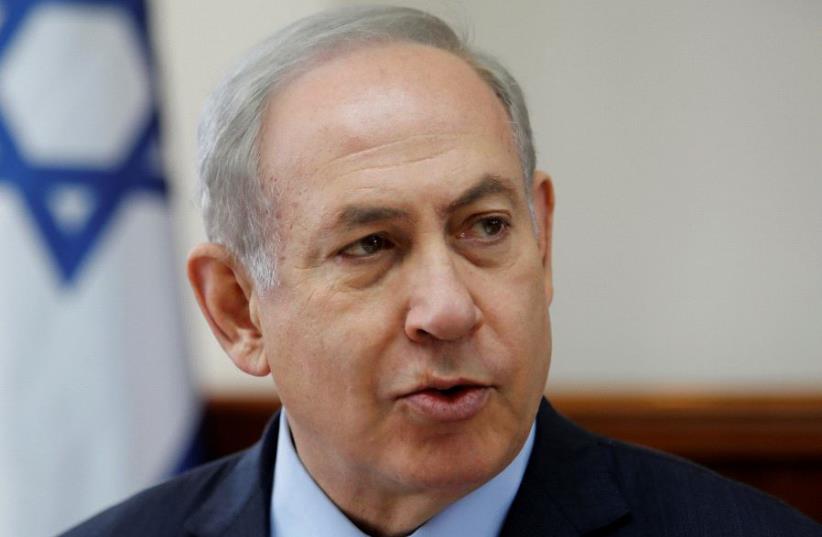 Israeli Prime Minister Benjamin Netanyahu chairs the weekly cabinet meeting in Jerusalem May 3, 2017.
(photo credit: REUTERS)
Advertisement
In a sign of Israel’s blossoming ties with Africa, Prime Minister Benjamin Netanyahu’s office has announced that in early June he will attend a summit of the 15-member Economic Community of West African States (ECOWAS) to be held in Liberia.It will be Netanyahu’s second trip to Africa in less than a year. Last July, he traveled to four East African countries – Uganda, Kenya, Rwanda and Ethiopia – for the first visit by a sitting Israeli prime minister to Africa in 29 years. He is also scheduled to take part in a summit in Togo in September.The ECOWAS summit is scheduled for June 4 in Monrovia.According to a statement put out by the Liberian Foreign Ministry, all the heads of state or governments of the 15 member countries are expected to attend, including two countries with whom Israel does not have diplomatic ties – Mali and Niger.ECOWAS represents West African countries with a combined population of 320 million.Liberian President Ellen Johnson Sirleaf visited Israel last June.Others scheduled to attend the meeting are UN Secretary-General Antonio Guterres, the new chairman of the African Union, Moussa Faki from Chad and a high-level delegation from Morocco.Netanyahu is scheduled to spend just one day in the Liberian capital, but will meet with a number of African leaders while at the summit. The Liberian newspaper The Daily Observer reported that advance teams from Israel have already arrived in Monrovia to prepare for the visit, and that there have been complaints about the security situation near the hotel where the summit will be held.Netanyahu has spearheaded intense efforts to improve ties with Africa under the slogan “Israel is coming back to Africa, and Africa is coming back to Israel.”Coincidentally, on the day of the summit, Ethiopian Prime Minister Hailemariam Desalegn will arrive in Israel for a four-day visit. The two prime ministers are expected to meet soon after Netanyahu returns from the summit.This will be the first visit of an Ethiopian prime minister in more than a decade and is reciprocation to the one Netanyahu made to Ethiopia last summer.Ethiopia is a diplomatically significant country for Israel on the continent because it houses the African Union; is currently on the UN Security Council; and its former foreign minister and health minister, Tedros Adhanom Ghebreyesus, last week won an election to become the next head of the World Health Organization – the first time an African will head the organization.His election was greeted positively in Israel, because he is considered a friend to the Jewish state. The Palestinians in the past have attempted to politicize the WHO to the same degree they have politicized UNESCO, often trying to pass anti-Israel resolutions.Last July, Netanyahu met in Jerusalem with Marcel Alain de Souza of Benin, the president of the ECOWAS Commission and they signed a joint declaration of intent for greater cooperation between Israel and the commission. The declaration stated that both parties “positively view the participation of the prime minister of the State of Israel in the ECOWAS summit in the near future.”In December, ECOWAS chose Israel as the site for its first seminar outside of Africa, with representatives from 13 ECOWAS states attending a three-day agricultural summit.