Pollard was discussed as a potential diplomatic bargaining chip during Obama’s first term, as part of efforts to renew peace talks with the Palestinians, source says. 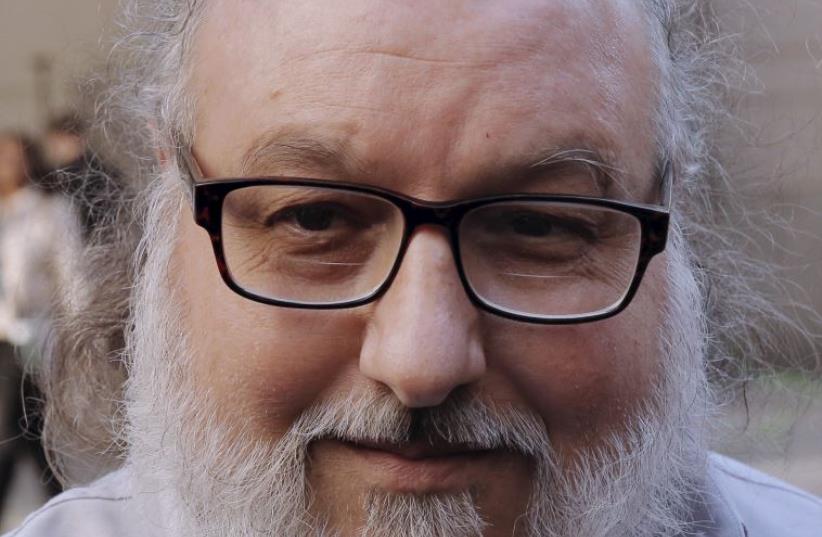 Israeli spy Jonathan Pollard leaves a federal courthouse in New York
(photo credit: REUTERS)
Advertisement
Prime Minister Netanyahu’s representatives made a serious effort to bring about the release of US spy Jonathan Pollard in negotiations related to the peace process and the settlement issue, starting in 2009, a source aware of the talks revealed Thursday.It had previously been known that Netanyahu asked US Secretary of State John Kerry to persuade President Barack Obama to commute Pollard’s life sentence to time served, to help pass a proposed release of Israeli Arabs convicted of security offenses in April 2014. Obama reluctantly agreed in an unsuccessful effort to extend peace talks Kerry was brokering.But the source revealed for the first time that Pollard was also discussed as a potential diplomatic bargaining chip during Obama’s first term as well, as part of efforts to renew peace talks with the Palestinians.The source said Pollard was unaware such discussions were taking place and later told Israeli officials he would not have agreed to leave prison as part of such a deal.“Pollard told me when I visited him that he would have objected to being traded for any concession in Jerusalem or Judea and Samaria,” said MK Michael Oren, a former ambassador to the US, who visited Pollard at his North Carolina prison in 2012. “He came up in every conversation I had with senior American officials.”Pollard was released from prison on parole on November 20 after serving 30 years of a life sentence for providing Israel with secret documents.He lives in New York with his wife, Esther, awaiting a ruling from New York District Court judge Katherine Forrest about whether his parole conditions may be relaxed.Pollard’s lawyers have challenged three of the restrictive probation conditions imposed since his release: the monitoring of both his home and work computers; the monitoring of his whereabouts via an electronic GPS anklet; and his 7 a.m. to 7 p.m. curfew.Asked why he did not ask Forrest to enable Pollard to make aliya, attorney Eliot Lauer indicated on Thursday that the time for that had not yet arrived.“Parole has full discretion to restrict travel,” Lauer said. “At some point they will have to justify such restrictions. I am not suggesting how long that might be at this time, but ordinarily all parolees are required to stay close to base at first.The president can moot the restrictions by commuting his sentence.”Haaretz reported this week that Pollard’s wife Esther asked ambassador to the United States Ron Dermer to relay a letter to the White House pleading for a relaxation of Pollard’s parole terms. The Free Pollard campaign called the report inaccurate.A representative of the Israeli Embassy in Washington had no comment.Michael Wilner in Washington contributed to this report.