The bill had sparked anger in the Arab sector since the beginning of the legislative process with members saying it was designed to target them. 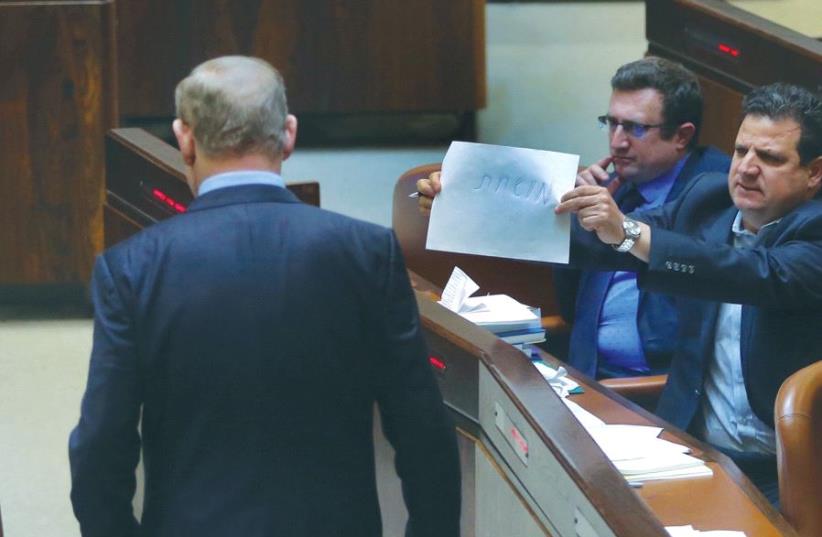 JOINT LIST chairman Ayman Odeh holds a piece of paper with the word ‘corrupt’ on it toward Prime Minister Benjamin Netanyahu in the Knesset
(photo credit: MARC ISRAEL SELLEM/THE JERUSALEM POST)
Advertisement
The Knesset on Wednesday passed the Kaminitz Law, which broadens the demolition powers of the authorities and allows them to impose larger fines for construction violations and illegal building.The amendment (No. 116) to the Planning and Building Law (1965), which passed 43-33 in a special recess meeting, restricts the discretion of courts regarding the enforcement of construction violations and expands the powers of administrative entities, especially national planning bodies and planning enforcement entities that deal with construction done without a permit.It also increases fines and prison terms for building offenses.The bill had sparked anger in the Arab sector since the beginning of the legislative process with members saying it was designed to target them.Following its passage, Prime Minister Benjamin Netanyahu praised the initiator of the law, MK David Amsalem (Likud), and the Knesset Interior Committee which advanced it. Netanyahu stressed his belief that the purpose of the law is to promote integration of the Arab population into Israeli society.“The government I am leading has invested in the Arab sector – and is still investing – more than any other government in the past,” he said. “We have invested in infrastructure, education, welfare, culture and housing, all in order to close the gaps.“They [Arab-Israelis] want to be a part of the State of Israel, of its economic success and of it future,” Netanyahu added.“We want the Israeli Arabs to integrate in Israel, but that means they will have to accept the law. [By passing this law,] we are starting to fix it today – one country, one law and one [means of] enforcement.”While Netanyahu spoke, members of the Arab-Israeli Joint List responded by shouting that the prime minister’s government has invested in incitement more than any other government in the past.“It is a disgrace, how can you call yourself prime minister?” said MK Jamal Zahalka, who was kicked out of the plenum hall, while the party’s chairman, Ayman Odeh, called Netanyahu “corrupt” and said: ”The advancement of this law goes along with your [criminal] investigation.”MK Oren Hazan responded to the Joint List comments in Arabic, saying: “You can all go to Syria.”In recent weeks, the Interior and Environmental Protection Committee, which advanced the bill, met with government representatives in order to amend and soften the legislation.It was decided that the law would come into force only six months after it passes, and that violations in residential buildings will fall under the legislation’s purview only if they were constructed in the past two years, while older homes will be subject to the old law.In introducing the law to the plenum, Amsalem stressed that it was not meant to target Arabs, but rather to help to fix the current situation.“Most of the Jewish population is obeying the law and whoever breaks it is being punished,” he said. “In the Arab sector, there is an inclination to think that law is a recommendation – if we can get an approval [to build] it’s great and, if not, it is also fine.”Amsalem said the Arab MKs are holding back their sector, and this law will improve their quality of life.“We will help you build planned cities with gardens, wide roads and towers,” he said.“It will elevate your quality of life.”MK Abdullah Abu Marouf, who is in charge of the planning and construction portfolio in the Joint List, called the legislation another “aggressive, inhumane and cruel law” by Netanyahu’s government.“This is another black day to democracy and to justice in which the Knesset plenum has chosen to approve a racist law over which even the State Attorney’s Office has expressed doubts,” he said.Abu Marouf reiterated past claims that representatives from the Arab sector have requested two years of reassessment to reach an understanding on the issue.“The government had to first regulate the illegal existing buildings and only then pass a law that harms the basic right to shelter,” he said.