Earlier this month Palestinians claimed ownership of 24 of the lots. The new objections leave only six property lots on which to create a new community for the 40 families that live in Amona. 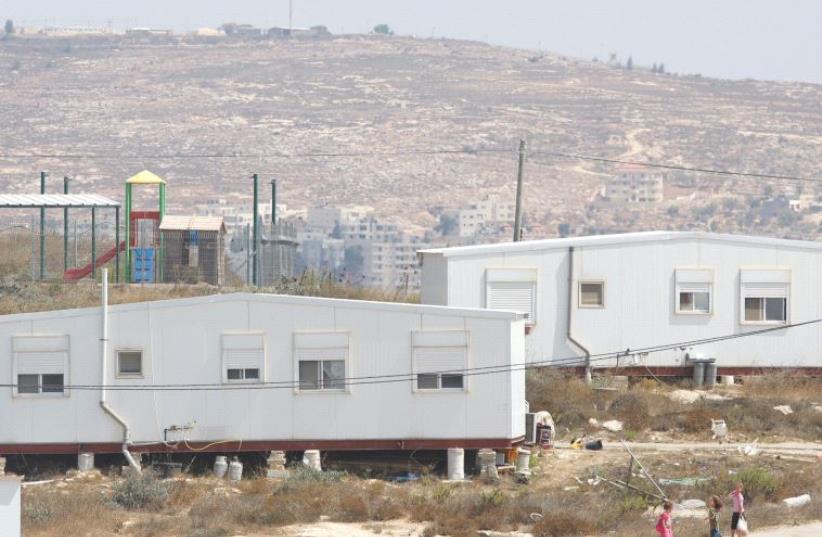 SEVERAL OF THE 40 homes at the Amona outpost, which the High Court has ruled must be removed by December 25.
(photo credit: MARC ISRAEL SELLEM/THE JERUSALEM POST)
Advertisement
Five more Palestinians on Wednesday claimed ownership of property lots in an area where Defense Minister Avigdor Liberman had hoped to relocate the Amona outpost, according to the non-governmental group Yesh Din.The objections the claimants filed with the Civil Administration make it increasingly unlikely that Liberman can execute his plan to seize 35 abandoned property lots.Earlier this month Palestinians claimed ownership of 24 of the lots. The new objections leave only six property lots on which to create a new community for the 40 families that live in Amona.In response to a Yesh Din petition, the High Court of Justice had ordered that the outpost must be razed by December 25.The Amona families have called on the government and right wing politician to authorize their community, which was built with a NIS 2.1 million grant from the Ministry of Housing and Construction.Politicians had initially pushed forward a “regulations act” in the Knesset to legalize what they estimate are 2,000 unauthorized homes in West Bank settlements and outposts, including Amona.But they backed away from it when Liberman put forward the relocation plan.In the past weeks as that plan appeared to fall apart, they have renewed their call to pass the bill, which has the support of 27 out of 30 Likud parliamentarians.Many of the Bayit Yehudi politicians have also pledged their support to the bill, but the position of its party head Naftali Bennett has been vague.To clarify matters, he sent a message to his party members on Wednesday morning in which he said that he pledged his support to legalize 2,000 homes, but had yet to decide what the best step forward was.Bennett promised that he and Justice Minister Ayelet Shaked would announce a major initiative in the coming week s that would resolve the matter. With regard to Amona, he said, he was among those who had supported Liberman’s plan as the best move forward.Shaked promised to do everything she could to find a solution for the Amona families.They spoke in response to attack against them by the campaign to save Amona, which claimed that the Bayit HaYehudi had not done enough to support them.Also on Wednesday afternoon, a group of Ofra residents visited President Rueven Rivlin. As with the residents of the Amona outpost, they are pushing for a legislative solution. They urged Rivlin to help them save nine homes in their community which the High Court ordered must be razed in February 2017 because they were built on private Palestinian property. Among the homes is one belonging to a disabled soldier, Yehuda HaYisraeli, who fought in the 2014 Gaza war.Later on Wednesday night MK Moti Yogev (Bayit Yehudi) visited the HaYisraeli home, followed by a meeting with Likud and Bayit Yehudi politicians at the Amona outpost.