There has been a significant increase of interest by religious female draftees to serve in combat- intelligence (reconnaissance) units where fighters are placed in one of the IDF’s co-ed battalions. 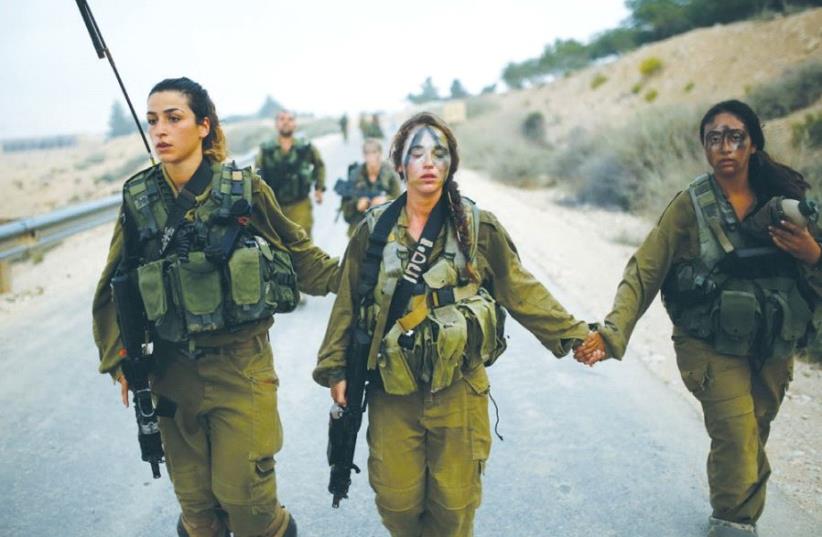 CARACAL BATTALION soldiers march in the Negev in 2014.
(photo credit: REUTERS)
Advertisement
A new mixed-gender army battalion will increase the number of female combat soldiers in the next year, specifically those stationed on the country’s borders.According to a senior military officer, 2017 will see the enlistment of more than 1,130 female combat soldiers, with close to 900 serving in combat-intelligence units, 200 in the artillery corps and another 50 in the army’s infantry units.There has been a significant increase of interest by religious female draftees to serve in combat- intelligence (reconnaissance) units where fighters are placed in one of the IDF’s co-ed battalions – Caracal, Bardalas and Lions of Jordan – and are assigned to guard the borders with Egypt and Jordan.Enlistment for the IDF’s fourth mixed-gender battalion, which is yet to be named and will be stationed in the Jordan Valley, will be launched in March and be operationally active by November. This new unit accounts for the spike in female combat soldiers, the senior officer said, adding that all mixed-gender battalions will be united into one professional division.According to IDF figures, 38% of female recruits have asked to serve in combat roles, which is one of the reasons the army is opening new combat positions to women.Speaking to The Jerusalem Post, a second senior officer called the move to increase the number of female combat soldiers “a smart and good revolution,” because it increases the number of potential top commanders exponentially.While his battalion is currently composed of 35% female combat soldiers and 65% male, he told the Post he hopes it will be 50%-50% in the near future.“What a woman brings to the battlefield is her maturity and calm nature and we need this,” he said. “A woman doesn’t need to act a man, carrying 45 kilos, for example, she needs to be a woman bringing her unique strength to the unit in the field.”An estimated 90% of positions in the IDF are currently open to women, including combat roles in the navy, Home Front Command, Artillery Corps and Military Police in the West Bank. Other combat posts that have been cleared for female soldiers include operating the Spike (Tammuz) missile and the hand-launched Skylark UAV.Despite the push for more female combat soldiers, however, combat units remain overwhelmingly male, with female combat soldiers still accounting for only 7% of frontline troops.Nevertheless, that is an increase from 3% four years ago, and the army expects that number to continue to rise.The army is considering opening additional options to women to make up for the loss of manpower since reducing the mandatory service period for men from three years to 32 months. These include positions aboard the navy’s Sa’ar missile ships and in the Armored Corps, a controversial move harshly criticized by former top IDF officers.According to the first senior officer, the army is continuing to examine the option of opening the armored corps to women, saying the army will be launching a pilot project to see how suitable women would be to serve in tanks from a physiological, technical and professional perspective.While the move will be “studied seriously,” he said, there would be no mixed-gender tank crews, and female tank crews would not be part of battalions that operate in enemy territory.They, instead, would be deployed only to the borders.The army has admitted that the training of female combat soldiers has not been ideal, so the training of all combat companies will be moved to one base and soldiers will receive specific training based on the borders on which they will be stationed.“Those who guard the borders might not know how to fight in Beirut, but they are experts in guarding our borders and that is one of the most important jobs in the army,” the first senior officer said.The IDF will also make several modifications to enable more women to complete their training in accordance with operational necessity. The IDF will allot more time to achieve the minimum level of physical fitness needed for combat positions to female recruits, and changes will be made to the equipment of female soldiers, such as replacing heavy Tavor assault rifles with lighter M-16 rifles and smaller kneepads, helmets and armored vests that better fit women’s bodies.