Obama to Rivlin: Important to try to reach peace between Israel, Palestinians 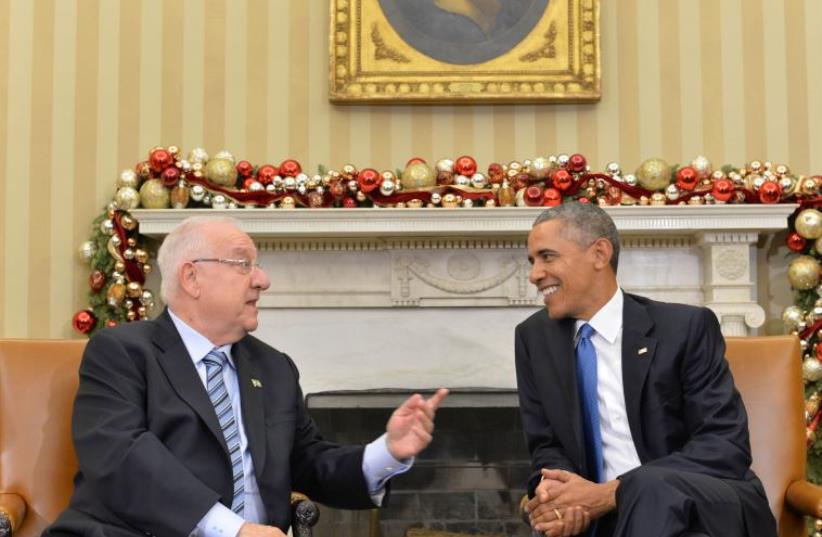 President Reuven Rivlin meets with US President Barack Obama in the Oval Office
(photo credit: KOBI GIDON / GPO)
Advertisement
WASHINGTON – At an Oval Office meeting with President Reuven Rivlin, US President Barack Obama said on Wednesday it is important to try to achieve peace between Israelis and Palestinians, even though the possibility seems distant.“Although obviously this is a time at which the prospects of serious peace may seem distant, it is important that we continue to try,” Obama said. “And I know that President Rivlin has made it one of his hallmarks to improve dialogue between Israelis and Palestinians.”Rivlin thanked Obama for his support and said, “We have no war with Islam.We have war against those who are using ideas in order to create extremism and threats toward the innocent people in the world.”Peace between Israel and the Palestinians may seem distant, but America remains committed to the cause, Obama told his guest.The president then invited Rivlin and his wife, Nechama, to be his special guests at this year’s White House Hanukka reception. Before the party, the two leaders met in the Oval Office to discuss security cooperation and the absence of peace talks.Obama said he had been “clear” in his condemnation of Palestinian violence against Israelis in recent months, and called on Palestinian Authority Mahmoud Abbas to join his condemnation of the slew of stabbings, vehicular attacks and shootings that have plagued the country’s Jews.Rivlin kept his comments brief and broad, lauding the timeless bond between Israel and the US, and praising Obama for his leadership.In an homage to the holiday, Rivlin called Obama a shamash – a leader of others, like the candle on a hanukkia that lights the rest.Rivlin presented his host with a replica of a gold coin dating back to the Byzantine period, which he had brought with him from Jerusalem.The coin was discovered in the Ophel excavations just south of the Temple Mount and features a relief motif of a menorah plus other Jewish ritual objects.At the traditional White House Hanukka candle-lighting ceremony, Rivlin related some of the history of the festival, emphasizing the tale of the miracle of the oil that burned for eight days. He noted that eight is a significant number in Obama’s political career, in that he was elected for two terms totaling eight years.

Greer Fay Cashman contributed to this report.
Advertisement
Subscribe for our daily newsletter