Former Prime Minister Ehud Olmert's attorney was caught with classified materials he reportedly smuggled into the jailed ex-premier's prison cell to help him write his memoir. 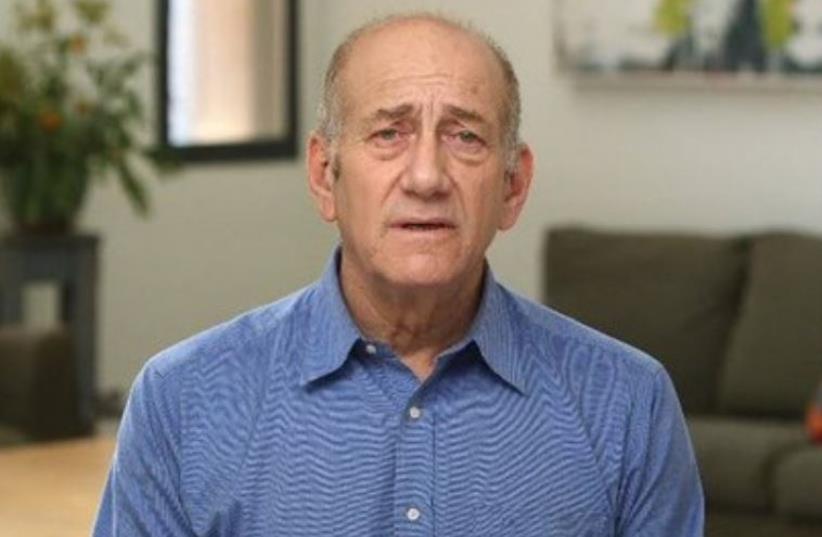 Ehud Olmert tapes a statement prior to his entering prison
(photo credit: Courtesy)
Advertisement
The Prisons Service denied former prime minister Ehud Olmert access to public phones and vacations on Saturday following the seizure of allegedly classified materials from Olmert’s attorney on Thursday.Olmert, who is serving a 27-month sentence in Ma’asiyahu Prison in Ramle for corruption offenses, started writing a memoir and reportedly asked his lawyer to bring the materials to his jail cell as background for his book.Olmert’s attorney was detained on Thursday after he was caught with the materials in his possession following a visit with the former head of government.It is unclear what the allegedly classified materials are, and the Prisons Service is investigating the matter. Hebrew media suggested that the materials are confidential documents that Olmert had written or acquired during his tenure as prime minister.
Former premier Olmert, just before entering jail: "I did not take bribes"
In a statement, Olmert’s attorney’s said that his client “does not require any seal of approval as to his connection and responsibility for subjects that are related to Israel’s national security. He has never leaked anything sensitive on subjects of security or intelligence that could have damaged the State of Israel.”The statement added that Olmert has submitted his autobiography to the Censor’s Office. “During his time in prison, Mr. Olmert wrote an autobiographical book that deals with his life affairs and his activities in social, financial and crucial security subjects.This book was passed on in its entirety to the Censor’s Office over two months ago and no one, especially not Mr. Olmert, has the intention of publishing it without getting the censor’s approval. Beyond this book, Mr. Olmert has not released any classified material of any other sort, he has not passed such materials on and did not publish them.”The imprisoned ex-premier had requested in the past special permission to write his memoir with the help of a computer, but his request was not granted. He reportedly has been toiling on the manuscript, written by hand, for a while now and has already written 1,000 pages. This most recent development could impact the parole board’s ongoing deliberations regarding Olmert’s request for release after having already served two thirds of his sentence.In March, President Reuven Rivlin denied Olmert's request for clemency. The president's office released a statement at the time in which it explained Rivlin's decision, stating that "despite Olmert's fall from grace to the lowest depths, the reasons given for his request were known to the court when he was sentenced and the court nonetheless chose to incarcerate him."