Lapid starts a trend by calling the Iran deal a failure on Netanyahu’s part and calling on him to quit. 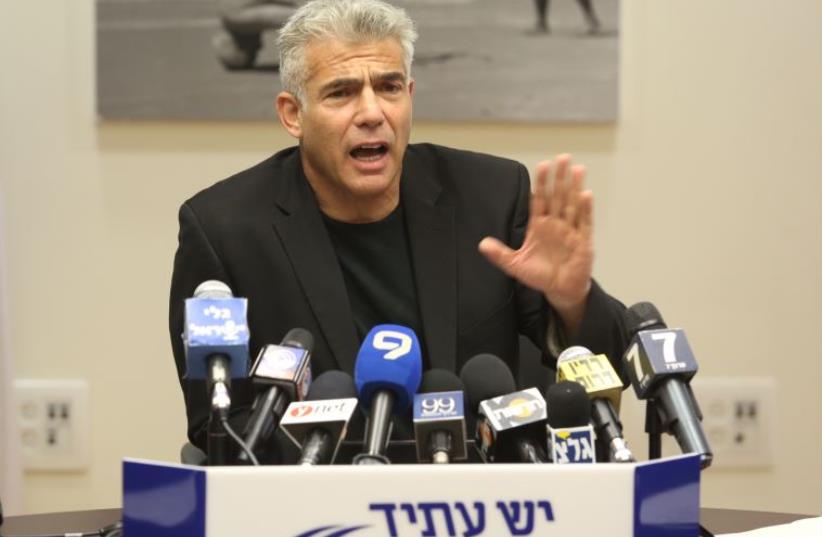 Yair Lapid
(photo credit: MARC ISRAEL SELLEM/THE JERUSALEM POST)
Advertisement
Yesh Atid leader Yair Lapid’s efforts to besmirch Prime Minister Benjamin Netanyahu’s reputation using the expected Iranian nuclear deal spread Monday to other opposition party leaders.Until last Monday, Israeli politicians did not seriously criticize Netanyahu on the Iran issue, because polls show he has the overwhelming support of the public on Iran. Whenever asked about Iran, the heads of opposition parties would say there was no coalition or opposition on the matter.But Lapid started a trend at last week’s Yesh Atid faction meeting when he called the Iran deal a failure on Netanyahu’s part and called upon him to quit. Lapid continued his attacks Monday, saying that Netanyahu must not be permitted to lead efforts to persuade US Congressmen to vote against the deal.
The nuclear deal and the average Iranian: Life back to normal?
“For years he led, almost on his own, the campaign against the Iranian nuclear program and he should be applauded for that,” he said. “But something bad happened to him this past year, because of the way that he has managed the situation, the door of the White House is closed to him, half of Congress isn’t willing to listen to him, we weren’t represented in Vienna, our intelligence relations were damaged and we’re all paying the price for his complete failure in preventing the deal.” Opposition leader Isaac Herzog revealed to his Zionist Union faction that he had pokes over the last few days to foreign ministers in the room at the P5+1 talks with Iran in Vienna. He said they did succeed in persuading him that the Iran deal would maintain Israeli security.At first he said the opposition should wait until after the efforts against the Iran deal have been completed before holding Netanyahu accountable. But Herzog then immediately added that the prime minister’s strategy had failed.“There must be dialogue with the US, and there hasn’t been because of the prime minister,” Herzog said. “This is a clear failure by him.”Yisrael Beytenu leader Avigdor Liberman said it was wrong for Israeli leaders to fight with each other on Iran, saying that there should not be a coalition or opposition on the issue. He said he “didn’t want to throw blame around” and that the parties in Israel should agree together on an anti-Iran deal strategy. But in the same sentence, Liberman also criticized Netanyahu, saying that he “should not have fought publicly with the US.” He also said Lapid was wrong to call for his party to lobby Congress, saying that once a deal is reached in Vienna, countries like China and France would sell arms to Iran, “without waiting a single minute for Congress.”Bayit Yehudi leader Naftali Bennett called upon Lapid and Herzog to withhold their criticism for Netanyahu, “restrain themselves,” and unite against the Iran deal.“A country that says it wants to destroy Israel is now gaining legitimacy to become a nuclear power,” Bennett said. “The citizens of the West must understand that half a trillion dollars are about to be given to a sponsor of terror, the most dangerous country in the world. The West is commuting international  hara-kiri, and we are trying with our little power to stop it. At such a time, we must be united.”