Zionist Union leader calls on Kulanu head "to take a chance and prevent this grave danger." 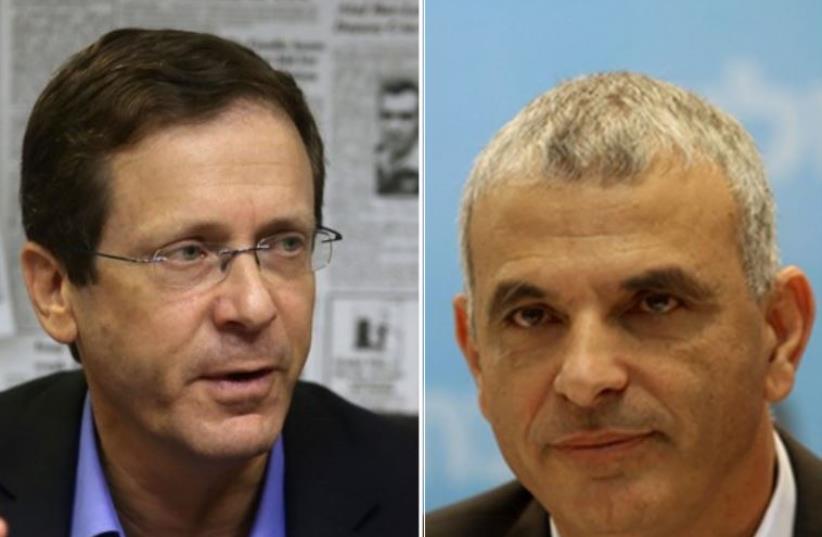 Zionist Union head Isaac Herzog (left) and Kulanu leader Moshe Kahlon
(photo credit: MARC ISRAEL SELLEM/THE JERUSALEM POST)
Advertisement
Opposition leader Isaac Herzog (Zionist Union) called on Finance Minister Moshe Kahlon (Kulanu) to pull out of the government on Monday after the cabinet approved Yisrael Beytenu's entrance into the coalition. "This is your moment" Herzog said and called on Kahlon "to take a chance and prevent this grave danger" pointing to the  addition of Avigdor Liberman's right-wing party to the governing coalition. If Kahlon were to leave the government, along with his Kulanu party the government would not have its needed majority in the Israeli Knesset.Herzog who has been fighting to keep legitimacy within his own party, amid calls for his resignation, said that members of the Zionist Union would be better suited turning their anger and aggression against the government than against their own party.In his remarks, Herzog verbally attacked Prime Minister Benjamin Netanyahu, charging that he no longer commanded control of the government and called him a "puppet" of the extreme-right. "This is a historic day. A day in which the elected prime minister gave way to the heads of the most radical parties to take control until now," he said. His comments came after negotiations between Herzog and Netanyahu broke down, paving the way for Liberman to enter the government as Israel's new defense minister.The political Left views Kahlon's centrist Kulanu party as the last option that could potentially topple the right-wing government. In the cabinet meeting Monday morning, Yisrael Beytenu member Sofa Landver was approved as Aliya and Immigration Absorption Minister and Likud's Tzachi Hanegbi was approved as minister-without-portfolio in the Prime Minister's Office.Herzog's comments came ahead of a Knesset vote to officially swear-in the new ministers on Monday night.