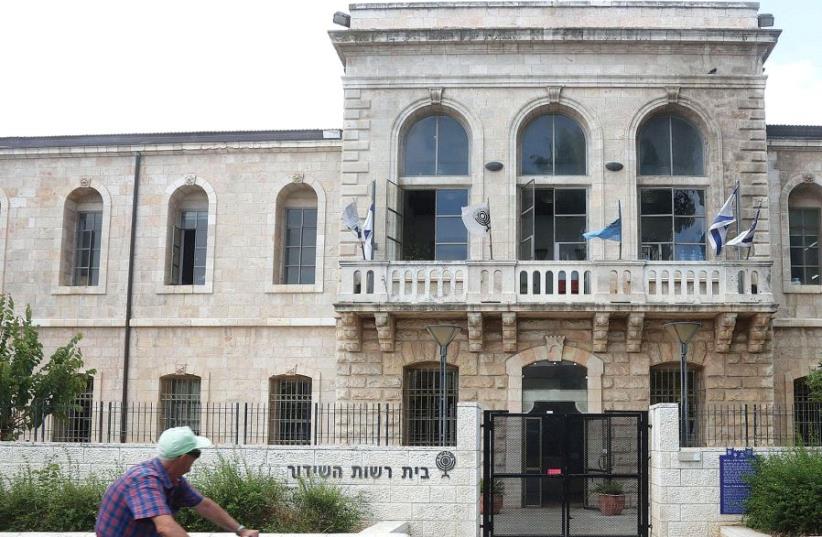 IBA HEADQUARTERS is located on Jerusalem’s Jaffa Road.
(photo credit: MARC ISRAEL SELLEM)
Advertisement
After attempting a filibuster in last week’s public broadcast debate in the Knesset, the opposition has decided to go to the other extreme and plans to boycott Thursday’s meeting on the subject.On Thursday afternoon, on the last weekday of the Knesset’s Passover recess, lawmakers are scheduled to debate and hold a first vote on legislation changing the structure of the Israeli Broadcasting Corporation’s news department.The opposition took issue with holding the meeting during the recess, something that is supposed to be done only for urgent matters, calling the process undemocratic. Last week, the opposition asked Knesset Speaker Yuli Edelstein to delay the vote until Monday, when the legislature returns to functioning fully, but he denied the request.Zionist Union faction chairwoman Merav Michaeli said Wednesday that “the coalition, with support from the Knesset speaker, chose to pass the law, which influences hundreds of families and the meaning of public broadcast in Israel, through a sneaky trick.“It is our responsibility as the opposition not to lend a hand to this flawed process, which is inappropriate in a democracy, and therefore we will not take part in the debate,” she stated.Michaeli added that “even if all the MKs in the coalition are willing to be Netanyahu’s subcontractor, we won’t take part in it.”Knesset discussions held during the recess are called emergency meetings. The opposition is usually the side to gather the requisite 20 MK signatures to call these meetings, usually to discuss current events.The vote Thursday followed a dispute between Prime Minister Benjamin Netanyahu and Finance Minister Moshe Kahlon over the transition from the Israel Broadcast Authority to the IBC. Netanyahu wanted to stop the IBC from going on the air, claiming its news department was biased, and Kahlon said there were too many sunk costs to not proceed. Opposition politicians accused Netanyahu of trying to shape a news broadcast that would be more favorable to him.Kahlon and Netanyahu reached a compromise; the first part, delaying the IBC’s launch to May 15, passed a final vote in the Knesset last week, and is expected to cost the government NIS 17 million. The two-week delay was to allow for the other changes in the compromise to be legislated by the Knesset: The news division will be run by those who do so in the IBA, and the IBC news director will be removed and replaced by someone selected by a committee headed by a judge.The first vote on those changes is set for Thursday afternoon, and committee meetings and the final vote will take place in the following 10 days.In addition to calling a boycott, Michaeli also tried a delay tactic for the bill, writing a letter to Attorney-General Avichai Mandelblit in which she called for him to intervene.Michaeli cited reports that the “Accessible Government” website was down for four days, saying that the total amount of days that the latest iteration of the IBC bill was online for was less than 21 days, which is the amount of time the state committed to having its initiatives online for public review and comment.“The time given to submit comments is meant to allow for good governance and give the public an opportunity to express its opinion and comments on the bill,” Michaeli wrote. “This is something that cannot be possible because of the short time remaining [to pass the bill]. Therefore, we ask you to intervene in this process by lengthening the time the public can comment and prevent continued legislation in the Knesset until the end of that time.”