Israel's budgetary process is key not only because it allocated the government's resources and priorities, but also because failure to pass a budget on time leads to automatic early elections. 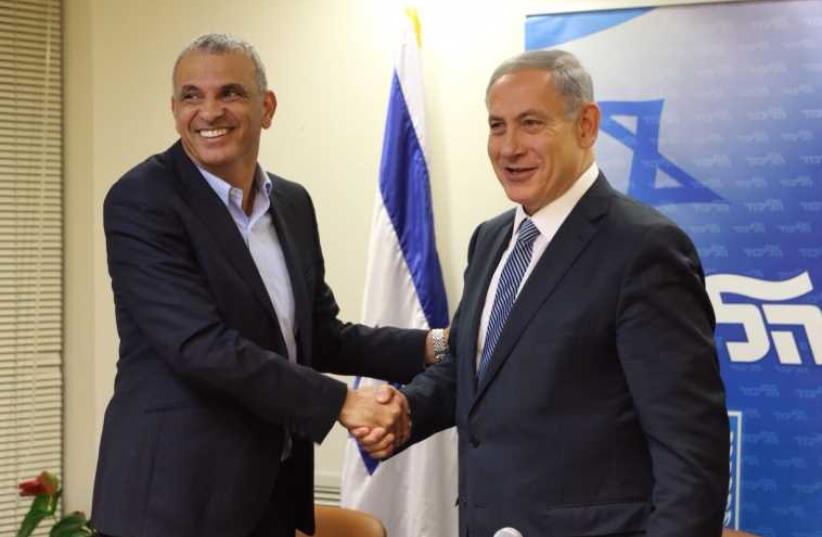 Kulanu head Moshe Kahlon and Prime Minister Benjamin Netanyahu shake hands after signing the coalition agreement
(photo credit: PRIME MINISTER'S OFFICE)
Advertisement
Prime Minister Benjamin Netanyahu and Finance Minister Moshe Kahlon ensured coalition stability on Sunday by striking a deal to return the country to a two-year budget, albeit a modified version.Israel’s budgetary process is key not only because it allocates the government’s resources and priorities, but also because failure to pass a budget on time triggers an automatic early election.Disagreements in the budget fights during both 2012 and 2014 helped fell governing coalitions early and led to general elections the following years.In a meeting at the Prime Minister’s Office, Netanyahu accepted Kahlon’s demands that the new process include a “way station” a year after the budget is passed to make adjustments, though details are still being worked out. The two-year budget was part of the coalition agreement.For example, the budget for 2017-2018 will have to be passed some time before the end of the current calendar year, around November.Kahlon, who preferred operating with a one-year budget, will have the ability to suggest alterations to taxes and spending priorities in November of 2017, halfway between the passage of that budget and the next budget for 2019- 2020.That, Kahlon hopes, will allow him to make any adjustments necessary given changing economic circumstances.The two-year structure fell out of favor when the 2011- 2012 budget failed to predict economic conditions in 2012, leading to a doubling of the deficit target.Under the new arrangement, however, failure to implement changes will not force an election, thus paving the way for a more stable coalition.A two-year budget makes it less likely for an election to be held before 2019, unless a party pulls out of the government or MKs in the coalition decide to vote against the government and for a new premier in a constructive no-confidence motion.The Bank of Israel, which serves a key economic role in budgetary planning and advocates a conservative approach to fiscal policy, put out a position paper on Sunday saying that choice between singleand two-year budgets “is not a cardinal issue.”It recommended cutting back on the use of overly detailed line items that would require Knesset authorization to change, setting extra reserve space when planning out the second year, and keeping the option of altering tax policy open should macroeconomic conditions change and upend budgetary forecasts.There was even an economic upside for using a long-term budget, the bank said.“The most important thing in building the budget, certainly when it has a longer- term horizon, is that the budget focuses now on the long-term challenges,” the bank said. One of the original reasons for installing a twoyear budget for 2009-2010 was to help the government allocate resources for long-term projects and create a sense of continuity and certainty for government offices.It was unclear if the two-year budget would be able to pass in the Knesset, where the government has 61 of 120 seats, as coalition member MK Oren Hazan (Likud) announced that he would not support it.Hazan demanded that Knesset Finance Committee chairman Moshe Gafni (United Torah Judaism) hold a meeting on the subject, in which Kahlon, Bank of Israel Gov. Karnit Flug and senior Finance Ministry officials would appear, and lawmakers could hear the rationale behind a two-year budget, its pros and cons, and how it would help the public.Opposition party Yesh Atid, whose chairman Yair Lapid favored reintroducing a twoyear budget during his tenure as finance minister, called the move a “gamble” with Israelis’ money, and promised to fight the decision.“The experiment called ‘the two-year budget’ already failed once and led to a big budget hole, an increase in unemployment, increased taxes and cuts to social budgets. Anyone who understands economics knows that a two-year budget is a disaster for the Israeli economy and the citizens of the State of Israel,” the party statement said.Knesset State Control Committee chairwoman Karin Elharar (Yesh Atid) scheduled a meeting to discuss the two-year budget and review the State Comptroller’s Report on the 2011-2012 budget, which was critical of the policy.Zionist Union MK Stav Shaffir also slammed the move. “The next time someone says there is not enough money to help Holocaust survivors, know that it’s a lie. There is money, but this government simply does not want to use it for the good of the public. It prefers to keep it in a small pot for political needs,” she said.