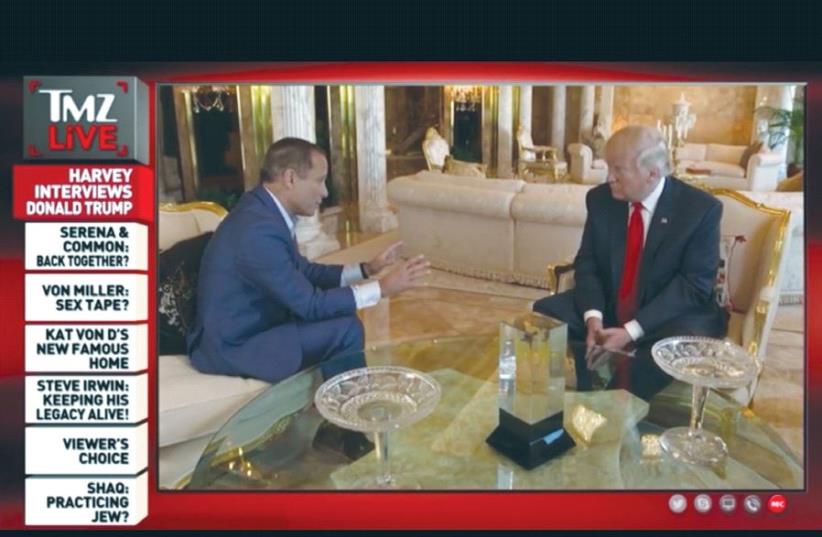 HARVEY LEVIN interviews US President Donald Trump in this preview for the Fox News show ‘OBJECTified.’
(photo credit: screenshot)
Advertisement
Prime Minister Benjamin Netanyahu is set to appear in an unusual TV interview – on the upcoming Fox News show OBJECTified.The show, which is scheduled to debut this fall, will profile celebrities and public figures through the items and keepsakes they’ve saved throughout their lives.According to the little- known Entity online magazine, which broke the story, Harvey Levin arrived in Israel last week to tape the interview with Netanyahu.Levin is best known as the founder of TMZ, a celebrity gossip website and TV show.Entity also reported that Netanyahu agreed to appear on the show after US President Donald Trump called him on Levin’s behalf and made the request.Taryn Hillin, who wrote the story for Entity, used to work as a producer for TMZ.Hillin told The Jerusalem Post that her sources indicate Levin is currently in Israel filming the episode.The Prime Minister’s Office denied that Trump was involved in setting up the interview, and declined to comment further on the show.In March, Levin had a meeting with Trump in the Oval Office, also first reported in Entity. The New York Times wrote that the pair spent about an hour together, and that Levin asked Trump to help him secure upcoming guests on the show, including New England Patriots quarterback Tom Brady.According to a press release from Fox News earlier this year, the show will be a 10-part series debuting on the cable network this fall.“The series will present close-up interviews with high-profile news makers and celebrities, aiming to tell the stories of their lives through their own personal items,” the release stated. The show was born after a special aired in November with Levin interviewing then-presidential candidate Trump about the objects and items that tell his life story.In the release, Levin noted that the show is “a different way of telling a life story, and it’s relatable to anyone who watches. Everyone keeps stuff that means something to them, and when you start probing what the objects mean to you, what was going on in your life at the time, they can unlock the story of who you are today.”Fox News would not comment on Netanyahu’s appearance, only noting that the show is slated to debut this fall.In February 2015, Sara Netanyahu gave a televised tour of the Prime Minister’s Residence to celebrity interior designer Moshik Galamin. Determined to counter the reports of lavish spending by the first family, she pointed out to Galamin sticking doors, broken lights and curtains with stains on them. But the video instead earned the Netanyahu couple a wave of derision and scorn.