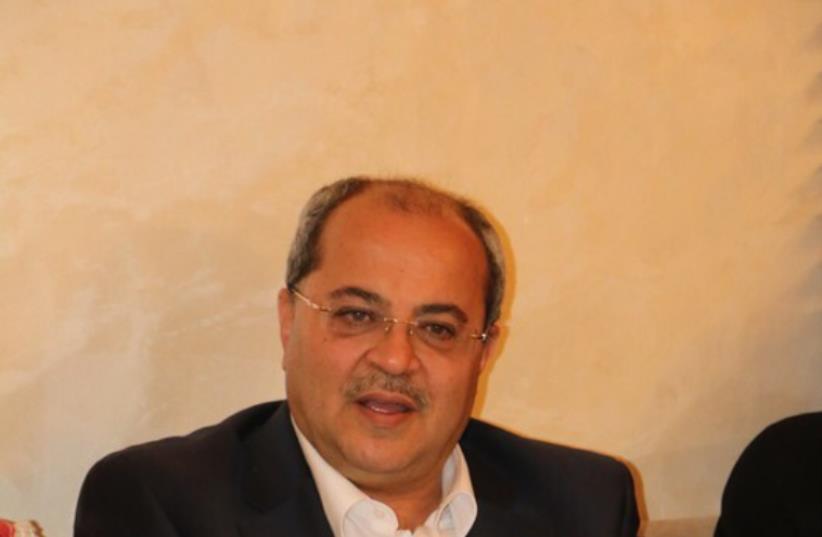 MK Ahmad Tibi
(photo credit: Courtesy)
Advertisement
Joint List MK Ahmad Tibi is by far the most popular lawmaker among Israeli Arabs, according to an end-of-year poll by the Statnet research institute, which specializes in the Israeli-Arab sector.The poll Statnet CEO Yousef Makladeh shared with The Jerusalem Post Monday states that over half (52 percent) of Israeli Arabs ranked Tibi as the best MK, and Joint List chairman Ayman Odeh trailed behind with 12%, followed by MK Jamal Zahalka with 2%.When asked who is best suited to lead the Joint List, 39% chose Tibi, 22% chose Odeh and 2% chose MK Haneen Zoabi.The representative sample of 304 Israeli-Arab adults polled last week overwhelmingly said they would vote for the Joint List in an upcoming election; 77% support the Joint List, while 7% went with Meretz, 3% Likud, 3% Zionist Union and 3% Shas.The poll has a 5% margin of error.Tibi’s spokesman, Ahmed Muhana, said “the broad public’s support of Tibi comes from his hard work and devotion to serving the public that sent him to the Knesset.“The public, mostly the younger generation, sees Tibi as a role model and a leader who is modest, but stands tall,” Muhana added. “We will continue serving the entire public, including those who didn’t vote for us.”Odeh’s office declined to officially comment, but a source close to the Joint List leader questioned the poll’s accuracy, pointing to its sample size.Since the Joint List was elected to the Knesset earlier this year, there has been tension among the leaders of the various parties that make it up.The faction was so fractious that it could not even keep up one group on the Whatsapp messaging application to update reporters; it splintered into two after aides bickered while journalists read their arguments.Ariel Ben Solomon contributed to this report.