After Gabbay was elected to the Labor leadership on Monday, polls show the centrist union gaining popularity, though still trailing Likud.

Avi Gabbay, the new leader of Israel's centre-left Labor party, delivers his victory speech after winning the Labor party primary runoff, at an event in Tel Aviv
(photo credit: REUTERS/AMIR COHEN)
Advertisement
The Zionist Union received a massive boost in the polls following the victory of former environmental protection minister Avi Gabbay in polls broadcast Tuesday night on Channels 2 and 10.The polls found that the Zionist Union, which had fallen under 10 Knesset seats in surveys months ago, would now get 20 according to a poll taken for Channel 2 by pollster Minna Tzemach and 24 according to pollster Camille Fuchs for Channel 10. 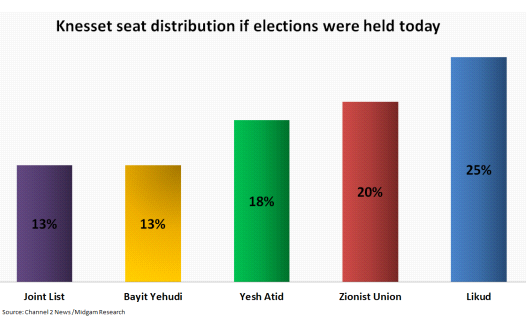 The Zionist Union still trails the Likud, which would win 25 seats according to Channel 2 and 29 according to Channel 10.But Gabbay’s party has passed Yesh Atid, which Channel 2 predicted would fall to 18 and Channel 10 to 16.When asked who is most fit to be prime minister, Gabbay narrowly passed Yesh Atid leader Yair Lapid in both polls, but they both trail Prime Minister Benjamin Netanyahu by a wide margin.Polls that were broadcast Wednesday were less positive for Gabbay.A Panels Research Poll taken for Walla! News found that the Likud would win 25 seats, Yesh Atid 21, and Labor 19, if elections would take place now. A poll taken for the radio station Kol Barama predicted 29 seats for Likud, 21 for Yesh Atid and 19 for Labor. Gabbay told reporters at his Tel Aviv office Tuesday that his successful campaign would now shift gears for what he called “war” against Netanyahu and his Likud party.Gabbay said Labor must act as if elections have already been set, even though a date had not yet been decided.“The campaign to replace Netanyahu begins today,” Gabbay said. “Elections have been called as far as we are concerned.We don’t know when yet. But we know we will win the 30 seats we need to defeat Netanyahu.”Gabbay said his defeat of six other Labor leadership candidates, which culminated in Monday’s runoff race, created “electricity,” which Labor would use to move forward for continued success.He said the website for joining Labor had crashed since his victory. He vowed to double Labor’s membership from 52,000 to more than 100,000 by the next general election.“I tell the public, if you believe me, join Labor,” he said.Earlier Tuesday, Gabbay took questions from reporters outside his Tel Aviv home.He said he had received messages congratulating him from all sectors of the population.Former defense minister Moshe Ya’alon did not rule out joining the Zionist Union under Gabbay in a Facebook chat Tuesday.He said the gap between him and Labor had been too wide until now but that could change, especially if solving the Israeli-Palestinian conflict stops being one of the banner issues for the party.Palestinian Authority Chairman Mahmoud Abbas called Gabbay to congratulate him. Gabbay thanked him and called on him to meet with Netanyahu face-to-face and deal with issues like building trust via small steps, such as removing textbooks with incitement from the Palestinian curriculum and removing roadblocks that prevent freedom of movement of Palestinians.“Peace is not made in international conference or regional conventions,” Gabbay said. “It must start by building trust and personal relations between the sides.”