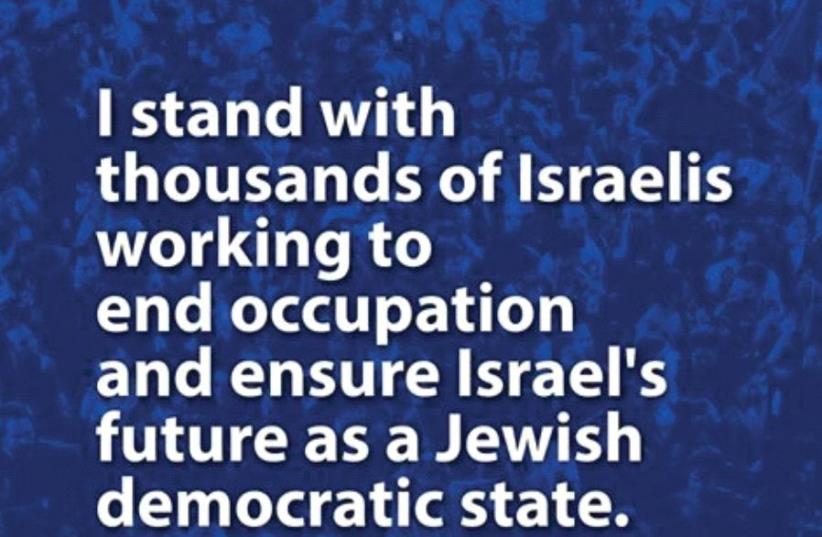 SISO APPEALS to Facebook users to join the movement.
(photo credit: FACEBOOK SCREENSHOT)
Advertisement
New peace organization “Save Israel, Stop the Occupation” (SISO) is appealing to Jews both in Israel and around the world to join their call for an end to the Israeli-Palestinian conflict, running events throughout June to mark 50 years since the Six Day War when Israel captured the West Bank and east Jerusalem.Trying to reach new audiences, SISO has two fresh focuses: the social and economic cost of Israel’s continued rule over the disputed areas and an attempt to quash the view of the conflict as intractable by shining a light on other prolonged conflicts that were resolved despite seeming “hopeless.”“There are a lot of people who agree [with our mission] but stay home and bury their heads in the sand because they feel it is hopeless. So we need to reach out with the message that it’s not hopeless,” says Jessica Montell, executive director of SISO, which stands for “Save Israel, Stop the Occupation.”Montell is an American-Israel who formerly served as the long-time head of the NGO B’Tselem.SISO was founded last year, with an eye on the milestone 50th anniversary as “a wakeup call.”“The idea is both to be injecting new information and analysis into the public conversation and conducting events so that people who want to take part know about those events and have channels to be expressing their opinion,” Montell told The Jerusalem Post Sunday.Together with Shatil, the operating arm of the New Israel Fund, SISO founded the “50- Out” network, which includes some 40 Israeli organizations.The website serves as a platform for events, initiatives and campaigns that will be taking place in the coming year related to the 50th anniversary of the Six Day War.An example of such events is Sunday’s rally led by Peace Now with the cooperation of dozens of organizations and left-wing political parties, during which participants touted the slogan “50 is enough.”Internationally, SISO is coordinating with Jewish communities on five continents, appealing to them to partner with Israelis to end military rule over the Palestinians.SISO hopes that by providing this bridge, “Israelis and Jews around the world hear the voice of the majority of Jews who support an end to occupation to ensure Israel’s future as a Jewish democratic state.”Activities will include synagogue ceremonies, prayers for peace, discussions, film festivals, exhibitions and book tours.“What was clear when we started this year-long process was that there is a lack of messaging around how that affects Israelis and Israeli society and Israel’s future, the price Israelis pay for our continued rule over the Palestinian population, the present day price and the future risk for Israel as a Jewish and democratic state,” she said.The Adva Center, a partner in the initiative, released a report Thursday, stating that “the occupation negatively affects the stability of Israel’s economy and produces an unstable line of growth, especially during times of prolonged confrontations such as the two intifadas and Operation Protective Edge.”The Parents Circle – Families Forum talks about the cost of human lives. And Montell, herself a mother of three, raises the price Israeli parents and their children pay in serving in the IDF. “What would military service look like if we weren’t ruling over 2.5 million Palestinians? It’s quite incredible that no one has asked or answered this in a public way.”Organizations partnering include Truah, J-Call, JStreet, Givat Haviva, Habonim Dror, as well as Jewish communities that don’t have progressive organizations in their cities.SISO is working on the premise that by cooperating with diverse groups, they will be able to reach a wider range of audiences, with a common goal.“Every organization works out of their relative advantage and then the total is greater than the sum of its parts,” Montell says.