Public security minister: ‘Hooligans’ of Amona will be arrested

Thirteen protesters were arrested during the evacuation of the Amona outpost and charged with disturbing the peace. 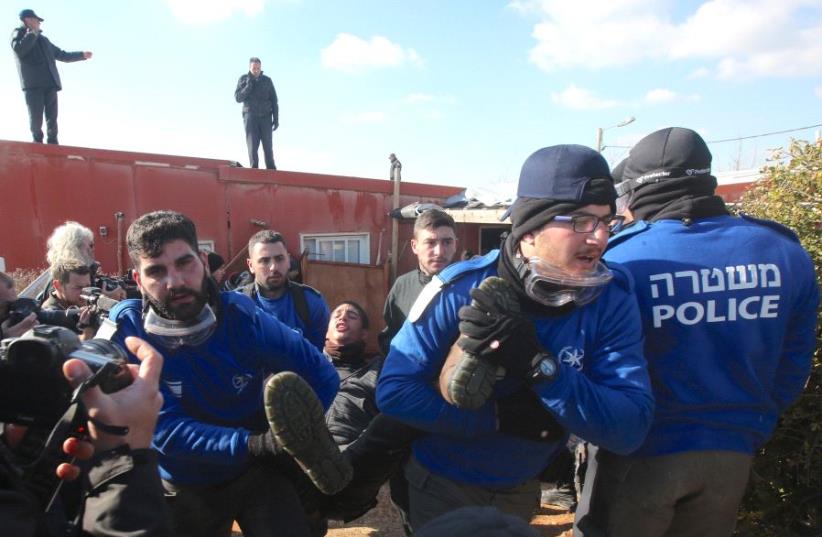 Forces evacuate Amona synagogue
(photo credit: MARC ISRAEL SELLEM/THE JERUSALEM POST)
Advertisement
The “hooligans” who attacked police during last week’s two-day evacuation of the Amona outpost will be arrested and face serious charges, warned Public Security Minister Gilad Erdan.In an interview with Channel 2 on Saturday night, he explained that the police would be reviewing video from the event to identify those who had attacked police.Thirteen protesters were arrested during the evacuation and charged with disturbing the peace.
Israeli police evacuate Amona synagogue
There had been hundreds of protesters, mostly teens and young adults, who had flocked to the outpost to thwart the evacuation of the 40 families who lived there.Most of them were forcibly evicted by policemen from the homes and the synagogue, then bused off the hilltop and released.Although many of them protested civilly, others attacked the police. Sixty police officers and at least 34 protesters were injured in the clashes, the fiercest of which was in the synagogue.Inside the synagogue protesters threw “stones, fire extinguishers, bottles of paint, lumber and things” at the officers, a police spokeswoman said.She later added that a few of the protesters had used pepper spray against the officers.The 40 families who had lived on the outpost were relocated to the field school in the nearby Ofra settlement, where they are to remain for the next several weeks.Prime Minister Benjamin Netanyahu has promised that he will build a new settlement for them, but a temporary location is needed to house them in the interim.On Friday the families went back up to Amona to pack their belongings. The Defense Ministry is expected to start taking down the homes this week, possibly as early as Sunday, when some of the former Amona residents are expected to join a demonstration in Ofra to protest against the demolition of nine homes there scheduled for February 8.The High Court of Justice had ordered that both the Amona homes and the ones in Ofra must be demolished, because they were built without permits on private Palestinian property.The Ofra families have asked the High Court to delay the evacuation by three months.The court is expected to respond on Monday.Regardless of the court’s decision, the Ofra families are expected to leave on their own volition, and it is unlikely that the demolition of their homes would be met with the same protests that occurred with the evacuation of Amona.Both the Amona and Ofra families have called on lawmakers to pass the so-called “settlements bill,” which would retroactively legalize settler homes built on private Palestinian property.That bill is expected to come for a vote on Monday night, even though the attorney- general has warned that it is unconstitutional and will not withstand any petitions against it that might be submitted to the High Court of Justice.