Envoys of the Quartet – comprised of the United States, European Union, United Nations and Russia – are meeting in Vienna this week to negotiate language for the report. 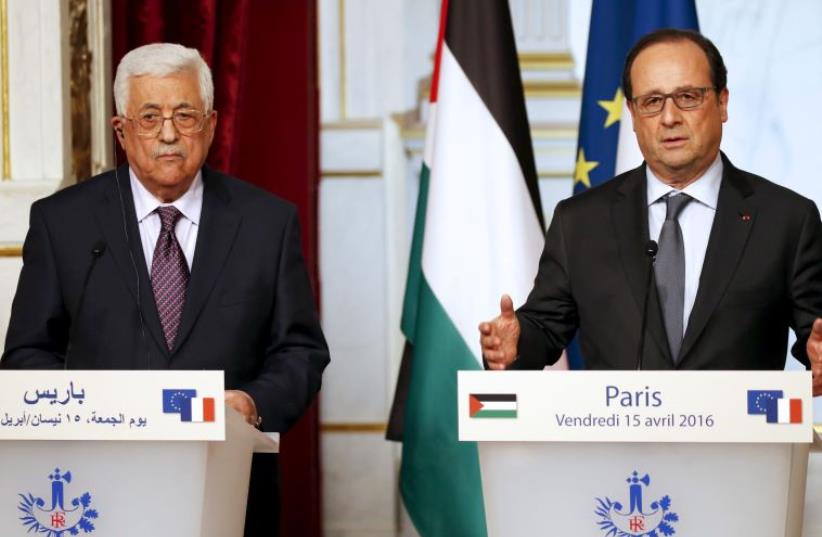 Palestinian Authority President Mahmoud Abbas (L) and French President Francois Hollande (R) make a joint statement in Paris, France, April 15, 2016
(photo credit: REUTERS)
Advertisement
VIENNA – In what will likely ease tensions in Jerusalem, a senior Obama administration official told The Jerusalem Post on Tuesday that the upcoming report on the status of the Israeli-Palestinian conflict by the Quartet is still months away and that few points had actually been drafted on paper.Envoys of the Quartet – comprised of the United States, European Union, United Nations and Russia – are meeting in Vienna this week to negotiate language for the report, which is expected to offer a brief synopsis of where the decades-old crisis currently stands.While no timeline has been set for the report’s release, the delay of a parley on the peace process organized by France – intended to lay the groundwork for a milestone international peace conference later this year– has provided the Quartet with more time to prepare the document, which is meant, in part, to supplement the Paris initiative.French President Francois Hollande announced the delay on Tuesday in an interview with a local radio station: “US Secretary of State John Kerry cannot come, so it [the planned May 30 ministerial meeting] has been delayed,” he said. “It will take place in the summer.”Kerry is expected to ultimately attend the conference, which Israel opposes and the Palestinians support.Quartet negotiations taking place in the Austrian capital this week are slowly progressing, and at such an early stage, comments on the shape of the report are merely speculative, the US official said.Israel fears the Quartet report will include harsh language on its settlement activity that, in years past, has been softened by the US. Past presidential administrations have argued that public rebukes of Israel are counterproductive to trust-building and the pursuit of peace.But the Obama administration believes that a “tough love” approach is necessary with the government of Prime Minister Benjamin Netanyahu, which it does not believe he presents at this time.”The statement added that they would continue to evaluate the remaining unspecified limits on Ettinger and would make them stricter or more lenient, based on his conduct and an ongoing evaluation.Attorney Yuval Zamar, from the organization Honenu, responded to the decision saying “it is too little, too late.”However, he said he is also “very happy that the extremely long detention of Mr. Ettinger is coming to a close, but very sad to learn that in the State of Israel in 2016, a human being can be detained for 10 months” without being charged.He said Ettinger was detained “solely for his political views, which are not pleasing to the ears of various groups.”The Jerusalem Post has learned that the decision to release Ettinger at the end of his second detention period was made while taking into account court supervision of the process as well as balancing competing priorities of civil liberties and the security necessity.Various authorities were asked about the seeming glaring contradiction that only a few weeks ago Ettinger was considered too dangerous to get a temporary release to attend his son’s circumcision, but suddenly now he is less dangerous and can be released.On the record, all the Justice Ministry would say was “the position of the state in the differing proceedings was determined according to professional opinions of all the relevant authorities.”However, the Post has learned that the two decisions, about how dangerous Ettinger is and what to do with him, were different in large part because of the mix of agencies, and the fact that their emphases in the proceedings were different.For example, even as the Justice Ministry and the Shin Bet are consistently involved, the temporary release of a prisoner to attend a family event might give greater weight to the Prisons Service opinion. In contrast, the broader decision about whether to extend administrative detention for an additional period might give greater weight to the Defense Ministry’s opinion.It is also notable that his second detention order was issued by Defense Minister Moshe Ya’alon for four months in the first place instead of the standard six months.This is often an indication from courts and the authorities that they are near the end of approving further extensions, though some Palestinian terrorists have remained in administrative detention for years.In mid-August, Defense Minister Moshe Ya’alon, with the legal approval of then-attorney-general Yehuda Weinstein, took the extremely unusual measure of placing all three far-right activists in administrative detention, with the Lod District Court in September upholding the order until at least February.Although hundreds of Palestinians can find themselves in administrative detention for terrorism-related allegations at any given time, it has been years since the measure was used against Jews.