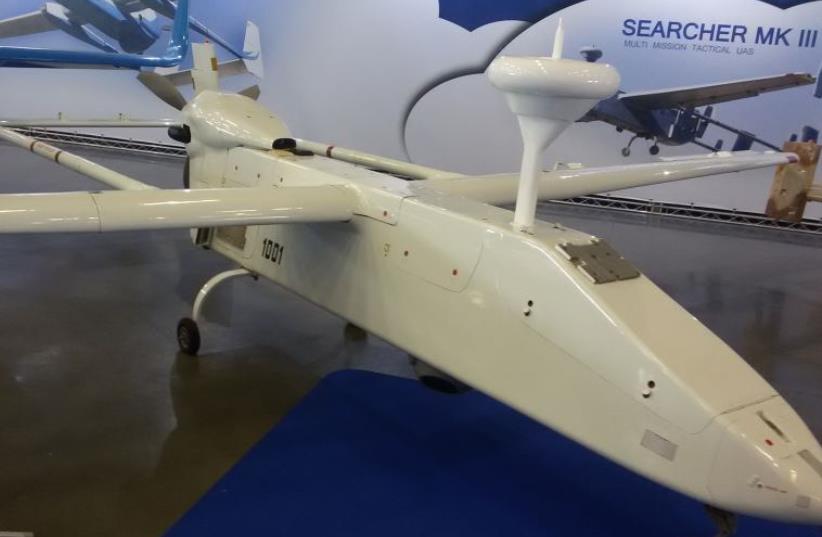 IAI's Searcher III drone, exhibited on Monday at the iHLS AUS&R exhibition in Rishon Lezion
(photo credit: YAAKOV LAPPIN)
Advertisement
Russia has purchased 10 Israeli intelligence-gathering drones this year, an independent Russian newspaper reported in recent days.According to a report published in Vedomosti on September 4, which was made available to The Jerusalem Post by Israeli journalist Shimon Briman, the Russian Defense Ministry purchased Israel Aerospace Industries-made Searcher-type drones, which are known as Forpost (Outpost) in Russia.IAI has declined to comment on the report.According to Vedomosti, the drones are to be assembled in Russia in accordance with a license awarded to Ural Work Civil Aviation factory.The Oboronprom defense industry enterprise owns 48.6 percent of the factory, according to the report.The report cited two aviation industry managers, as well as a figure close to the Russian military establishment, as the sources for the information.Briman, an expert on Russian-Ukrainian affairs, described Vedomosti as a highly respectable business newspaper in Russia, which enjoys a good reputation and “relative independence from the Kremlin, as much as is possible.”Forpost systems are used by Russia to monitor the Russian- Ukrainian border regions, according to Vedomosti.In May, Ukrainian forces shot down two Russian drones over a conflict zone in the east of the country and retrieved the wreckage, publishing photographs showing the words “IAI” and “MALAT [UAV] Military Aircraft Group.”One of the drones was struck by a special Ukrainian reconnaissance unit near the Luhansk region of eastern Ukraine, according to a Guardian report from the time.In January 2011, IAI delivered 12 drones to Russia for an estimated $400 million, in a contract designed to allow Russia to manufacture its own advanced drones, UPI reported at the time of the delivery.The delivery included short-range Bird-Eye 400 and I-View Mk 150 aircraft, as well as the longer-range Searcher II.The Searcher Mk II and Mk III are both multi-mission tactical drones used for surveillance, reconnaissance, target acquisition, artillery adjustment and damage assessment.Media reports at the time of the first UAV transaction suggested that the military sales offered Jerusalem an avenue of influence as a means to reduce the chances of Russia selling advanced weapons to Iran, the Assad regime and Hezbollah.Also on Monday, the Swiss parliament approved the purchase of six Israeli surveillance drones despite opposition from activists who said the move constitutes an investment in “systematic human rights abuses” against the Palestinians, AFP reported.The deal with Israel’s Elbit Systems for the purchase of six unarmed Hermes 900 drones is said to be worth $256m.Hermes 900The plan to buy the drones was approved 30-12 by Switzerland’s upper house of parliament, after already having passed the lower house.AFP quoted Socialist Party representative Geraldine Savary, who spoke on behalf of those who opposed the deal, as arguing that parliament should not authorize the deal because Israel used Hermes 900 drones during last summer’s Operation Protective Edge, in which more than 2,000 Palestinians were killed in the Gaza Strip.Swiss Defense Minister Ueli Maurer said the country was not buying the drones from Israel, but rather from Elbit, a private firm. He added that the Swiss have no prohibition on importing military equipment, which, in this case, will be used for monitoring the Swiss border.Sam Sokol contributed to this report.