Rivlin to Kerry: 'The pain is the same in Tel Aviv as it is in Paris'

President and Secretary of State spoke on the two nations' shared grief after the murder of Jewish US teen Ezra Schwartz. 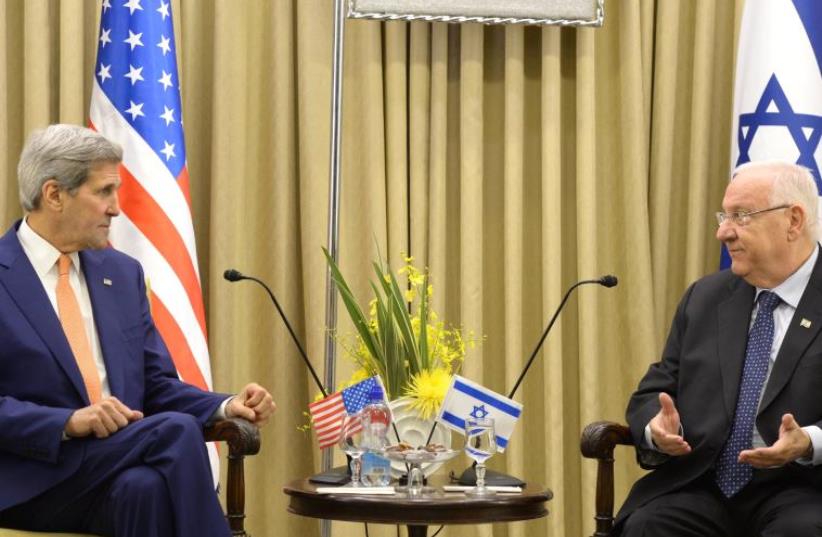 Rivlin and Kerry
(photo credit: Mark Neiman/GPO)
Advertisement
President Reuven Rivlin hosted United States Secretary of State John Kerry Tuesday, with the latter in Israel for a day of talks. Kerry is in the country to discuss the current wave of Palestinian terror, along with other issues such as the Syrian crisis. Negotiations between Israel and the Palestinian Authority are reportedly not on the agenda for the visit.In their statements to the press, both Rivlin and Kerry spoke about the November 19 murder of Ezra Schwartz, a Jewish US citizen who came to study in yeshiva. The shared tragedy of Schwartz's murder highlighted that aside from common values and principles, one of the binding factors between Israel and the US continues to be the common battle on terror, with American citizens often tragically falling victim to Palestinian terrorist attacks on Israeli soil."The terrible scenes we have seen, around the world, have shaken us all - and we continue to send our prayers to the injured and those who lost loved ones,” said Rivlin, emphasizing that Israelis are not strangers to the horrors of terrorism.“The pain is the same, in Tel Aviv, as it is Paris, in Gush Etzion, in Mali and in Sharon Massachusetts,” he said as he reiterated deepest condolences to Schwartz's family – “an 18 year old US citizen murdered while here in Israel, to study and volunteer.”All free nations are facing the threat of radical Islam, Rivlin continued, and underscored that radical Islam “is the product of hate - not of faith.”Rivlin also thanked Kerry for his dedication in helping to bring an end to the Israeli-Palestinian conflict.Schwartz’s tragic death struck a chord with Kerry, not only because it was yet another example of an innocent civilian being targeted for terror, but also because Kerry is also from Boston.Kerry took Schwartz’s death as a challenge to all civilized people to make it clear that there are no excuses, or justifications, for the killing of innocent people.He termed the terrorist attacks “an outrage" and condemned them in no uncertain terms.  He also pledged that the US will continue to stand with Israel “in support of your right to live in peace and stability without violence.”Kerry has been a frequent visitor to Israel since the 1980s, and has traveled much of the length and breadth of the country, from Kiryat Shmona to Sderot. The Secretary of State said that he feels “very much part of Israel” and wrote in the presidential guest book “It is an honor to be here once again. The United States stands proudly with our ally and friend. May we find peace together.”In his meeting with Prime Minister Benjamin Netanyahu earlier on Tuesday, Kerry had stated, “Clearly no people anywhere should live with daily violence, with attacks in the streets, knives, or scissors, or cars.”“It is very clear to us that the these acts of terrorism that have been taking place deserve the condemnation they are receiving. Today I express my complete condemnation for any act of terror that takes innocent lives, disrupts the day-to-day life of a nation,” he said.